First-timers at the Memorial off to fast starts 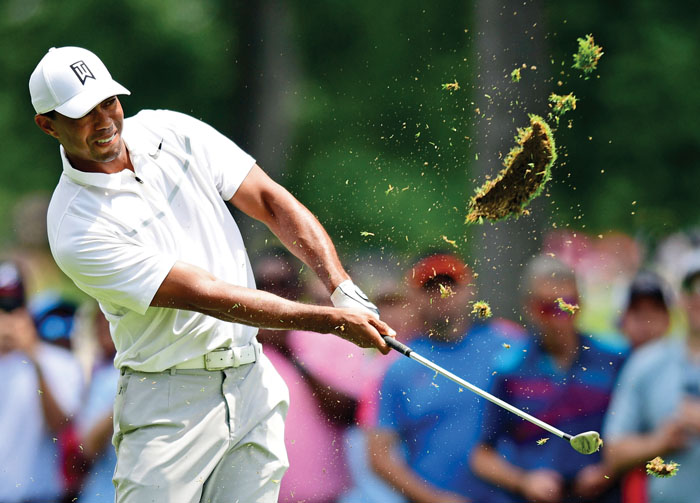 AP Photo/David Dermer ... Tiger Woods follows through on his swing on the ninth hole during the first round of the Memorial golf tournament Thursday, in Dublin, Ohio. Woods shot an even-par 72.

DUBLIN, Ohio (AP) — Beau Hossler is looking for a strong finish after another fast start.

The 23-year-old Hossler logged four birdies on the front nine, then recovered from a bogey on the par-3 16th to birdie the 17th and get back to 6-under 66. Hossler is one shot off the lead after the opening round of the Memorial on Thursday.

“Greens were phenomenal,” Hossler said. “If you get your ball below the hole you can definitely make some putts, and fortunately today I did.”

Hossler has three top-10 finishes this season, his first on the PGA Tour. He flirted with his first tour win a month ago at the Houston Open, but lost a sudden-death playoff to Ian Poulter on April 1 after he triple-bogeyed the first playoff hole.

Hossler avoided such monumental mistakes on Thursday in his first trip to Muirfield Village.

The bigger challenge lies ahead for Hossler, who hasn’t managed to finish strong since Houston. He shot a 64 in the opening round of the Colonial last week, but ended the tourney at 1 under in a tie for 64th place.

“I have tons of confidence from closing out tournaments from junior and amateur golf and college golf. It’s not a concern of mine,” Hossler said. “Obviously I noticed a trend, but at the same time I think I’m on the right track and I’ve just got to stick with what I’m doing.”

Another young golfer, 19-year-old Joaquin Niemann, had a big day playing in his first Memorial.

Playing in just his fifth pro tournament, Niemann finished the first round with a 7-under 65 for a first-place tie with Abraham Ancer and Hideki Matsuyama.

Niemann, who is from Chile, said that he surprised even himself with his early success.

“I think that it has been all really quick,” said the youthful-looking Niemann, who wears braces. “Two months ago I was playing the Masters as an amateur, and right now I’m already played four tournaments as a pro and it feels really nice. … So being out here, playing with the best players, it can’t be any better.”

Niemann carded eight birdies in looking for his third top-10 finish. He finished sixth in his pro debut at the Valero Texas Open and tied for eighth last week at the Colonial.

Lucas Glover returned to the PGA Tour for the first time since his wife, Krista, was arrested on May 13 in Florida on a misdemeanor domestic violence charge. He posted a 5-under 67.

The charge against Krista Glover stemmed from an altercation with her husband and his mother after he missed the 54-hole cut at The Players Championship. The police report in Florida said Glover told deputies his wife often starts arguments with him after a poor round.

Lucas Glover had said that he appreciates the support that he has received. He has asked for privacy.

“I’m going to stay away from that stuff,” Glover said Thursday when asked about the matter. “I made some statements the last couple weeks. I’m just going to have to refer to that stuff and I would prefer to talk about today, if that’s OK.”

Glover said his biggest concern was not being to play much the last few weeks because of rain in Florida, and a long line of PGA Tour players at an indoor facility at The Bear’s Club where he plays in Jupiter, Florida.

Glover finished the first round two strokes off the lead.

Despite a forecast of afternoon thundershowers in central Ohio, the multitude of umbrellas being carried by fans stayed closed. That could change on Friday, when rain and thundershowers are expected.

Nothing new around here. Only seven tournaments have been uninterrupted by rain over the past three decades at the Memorial. Last year, there were two rain delays on the final day.