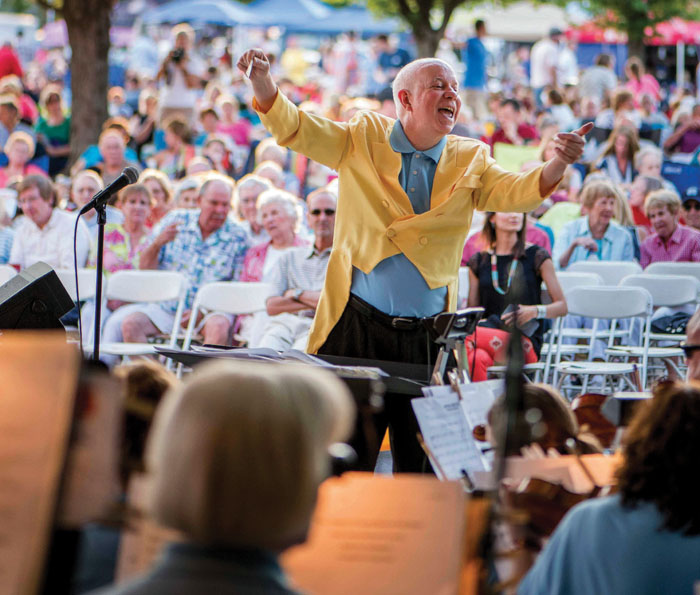 SALISBURY — As the Salisbury Symphony prepared for its first Pops at the Post rehearsal Thursday evening, Maestro David Hagy said the last-minute scramble was well underway.

Pops at the Post serves as a bridge between seasons for the symphony. The concert is held the first Saturday in June with entertainment starting at 1 p.m.

The symphony performance begins at sundown, about 7:45 p.m.

Hagy said the scramble is to be expected, though shuffle may perhaps be a more fitting descriptor.

The Salisbury Symphony has more than 70 musicians, many of whom travel from out of town. With a group this large, Hagy said, each concert begins with directors identifying who will take part, who won’t, and how the gaps will be filled

On Saturday, one instrumentalist will be away to visit an ailing family member. Another, a horn player, is recovering from a mouth injury.

“All these things happen that the public never knows about,” said Hagy. “This happens every year: We find ourselves still seeking someone the day before the first rehearsal.”

There have been other shifts over the past few weeks.

In late May, Hagy was still casting a quartet of African-American women to perform a medley from “Hello, Dolly!”

The song and the singers are meant to pay tribute to Pearl Bailey’s winning a Tony Award for the show in 1968. She won for her performance as the lead, Dolly Gallagher Levi, among the Broadway musical’s first all-black cast.

The quartet will include Teresa Moore-Mitchell, Alexis Greer, Virginia Rush and Rebecca Stinson.

Stafford composed “Bell Tower March” to symbolize a new and hopeful partnership between the new green space and the Salisbury Symphony.

And more changes may yet come.

In the previous 13 years of Pops at the Post, the concert has never been moved to another location because of bad weather.

The performance generally is from the loading dock of the Salisbury Post building, with crowds gathered in the parking lot across South Church Street.

Last year was certainly a close one, but Hagy said he’s still watching the weather forecast before making a call by noon Friday.

If relocated because of rain, Pops at the Post will move to Catawba College’s Keppel Auditorium, 2300 W. Innes St., with the same schedule.