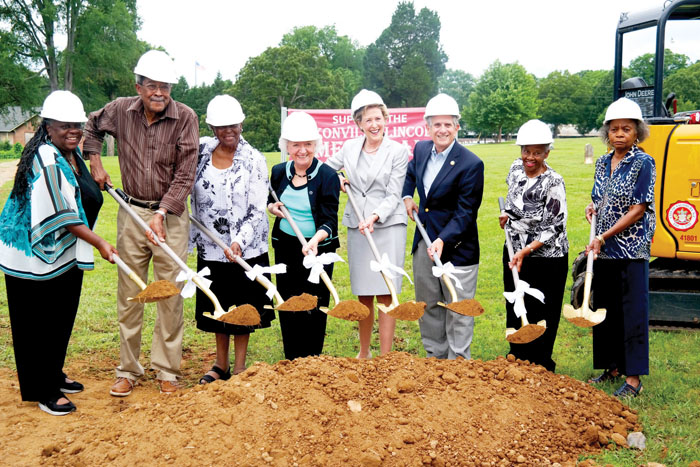 SALISBURY — For Emily Perry, Thursday morning’s groundbreaking at the Dixonville Cemetery project made her feel like she could “breathe again.”

“But we still have more work to do,” Perry said.

She said she and the task force have been working for 10 years to revitalize the cemetery, where an estimated 500 African-Americans were buried without markers.

“This is a momentous occasion for the African-American community, but also for the city of Salisbury,” Perry saidin her remarks Thursday. “And I pray that this will translate and other people will dig into their history and acknowledge all the hard work that African-Americans have contributed to this city and this state and this country.”

The groundbreaking marks the first step toward “increasing the prominence of the early African-American cemetery, interpreting its history and paying respect to those buried,” according to a city news release.

Landscape architect and task force member Stephen Brown said work on the first phase of the cemetery revitalization could begin as early as next week.

Brown said Phase 1 will include a paver sidewalk, which would run the length of the cemetery along Old Concord Road, and the installation of granite blocks.

He said that once enough money is raised for Phase 2 of the project, the names of those buried in the cemetery will be engraved on the stones.

Evans’ husband, Fred, was once chairman of the task force.

“I have a definite one that I remember my husband said over and over again, about having faith and hope in the project and everything, so I know that will work,” Evans said.

Fred passed away almost three years ago, but Evans said she knows he would be proud to see the progress that’s been made since then.

“I know he would be so pleased because at one time it was going kind of slowly after he passed. But now it’s getting on its feet, so I’m happy,” Evans said. “He would be so proud.”

Evans said projects like the revitalization of Dixonville Cemetery — and the Lincoln School, which will be updated after the cemetery is completed — help educate the community.

“Each time we have something like this, it adds to the history of so many things that people did not know. And perhaps, before too long, it will come together and be much more meaningful now that we can put it together,” Evans said.

Former Mayor Susan Kluttz was invited to attend the groundbreaking. Kluttz appointed the task force in 2010.

“I saw Dixonville as being very, incredibly important to the city for several reasons,” Kluttz said.

One of the reasons, Kluttz said, is because Dixonville Cemetery felt like “the last piece of a puzzle” in terms of recognizing African-Americans who had been buried without ceremony.

Kluttz said that just before she appointed the task force, the City Council decided to remove part of a historic wall between Old English Cemetery and Freedman’s Cemetery.

Because the wall was historic, the State Historic Preservation Office said the city could not alter it.

“So our City Council had to make the controversial decision — history versus race relations — then,” Kluttz said. “And we unanimously chose that race relations was more important to us at that time.”

Kluttz said she is grateful that councils since then have continued to support the Dixonville memorial task force in the years since.

“And I’m just thrilled with what happened … (and) that the citizens haven’t given up. They’ve worked hard. They’ve raised a lot of money,” Kluttz said.

Perry and Brown said the task force still hopes to raise more money to pay for future phases of the project.

“As we raise money, we’re going to keep moving forward with the project,” Brown said. “And our thinking is that, now that we’ve got the project started, people will see what’s going on and want to donate to the project.”

For more information about the project, visit dixonvillememorial.com.