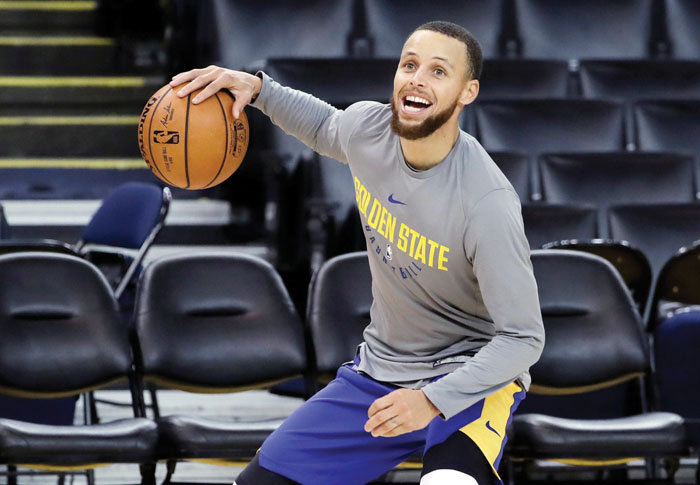 Golden State Warriors' Stephen Curry smiles as he dribbles during an NBA basketball practice, Wednesday, May 30, 2018, in Oakland, Calif. The Warriors face the Cleveland Cavaliers in Game 1 of the NBA Finals on Thursday in Oakland. (AP Photo/Marcio Jose Sanchez)

OAKLAND, Calif. (AP) — Cleveland and Golden State were stressed and stretched to their limits in the conference finals this time around, leaving little time to recoup and prepare for their latest showdown in the NBA Finals.

“Splintered” is how Stephen Curry described what he feared could happen in the second quarter of Game 7 at Houston, with the Warriors pushed to the brink by the Rockets.

So, Golden State held a serious team chat and got it together at last. LeBron James willed his Cavaliers back to the big stage with another spectacular performance against Boston.

“It was a special moment for us. And I think one that we’ll look back, if we get the job done over these next two weeks, where, again, as an appreciation of all that goes into winning a championship,” Curry said Wednesday, “and doing it by committee and making sure every guy, whether you’re playing well or not, or things are going your way or not, that we all bring something to the fold that have gotten us to four straight Finals.

“And we’ve done it by appreciating everybody that’s a part of that group. I think that two and a half minutes was a special moment for us, and it should give us great momentum going into the series.”

Now, James and the Cavs and Curry and the defending champions find themselves in familiar territory, facing off in a fourth straight NBA Finals — just with far less prep time after each team played furious Game 7s on the road to get back here.

King James stands in the way of a Warriors repeat, just as he did in spoiling that quest for Golden State and leading the Cavs to a championship two years ago with a Game 7 win on the Warriors’ home court, where they have currently won 17 of the last 18 postseason games.

Here are some things to watch for heading into the best-of-seven series:

JAMES’ SHOT: James isn’t ready to make any bold predictions about how great he might be in his eighth straight Finals.

Yet the way he prepares, there’s no doubt in his mind he will be ready when the ball tips.

NO REST FOR THE WEARY: With only two days between games after the Warriors eliminated the Rockets 101-92 on Monday night, Draymond Green is happy to have an opponent in Cleveland he knows so well.

“In recent years we’ve been kind of having a week off, at most, to prepare for the Finals. It’s almost a day to prepare this time,” he said. “So it definitely helps knowing the opponent, knowing, obviously, everything stops and starts with LeBron, and trying to do what we can to make things tough on him, but also take other guys out of the game.”

The Cavs finished their series Sunday at Boston, so James spent a relaxing Memorial Day Monday with family having a barbecue.

INJURY WOES: Both teams face significant injury concerns: Golden State defensive stopper and 2015 Finals MVP Andre Iguodala was ruled out for Game 1 with a bone bruise in his left knee, while Cleveland’s Kevin Love remains in the NBA’s concussion protocol with his status uncertain.

GOLDEN STATE AMONG GREATEST: James considers Golden State among the greatest teams ever, and insists each side has earned this. James is ignoring the critics who say this annual matchup might be bad for basketball.