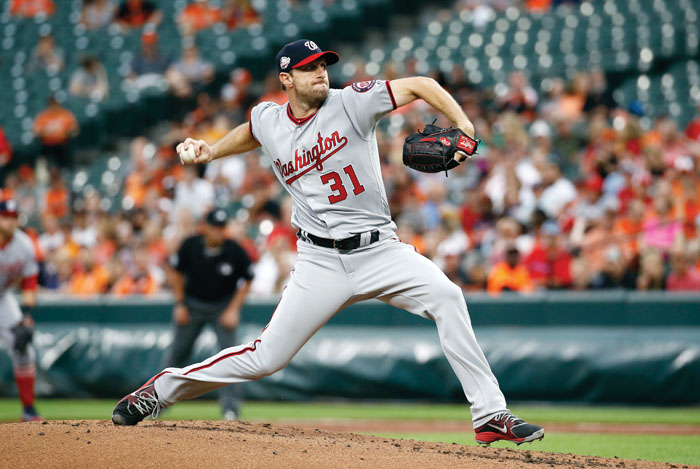 BALTIMORE (AP) — In a game that matched Max Scherzer against Baltimore’s anemic offense, the result played out exactly as expected.

Bryce Harper hit his 18th home run for the Nationals, whose 10-game road winning streak is their longest run since the team moved from Montreal in 2005.

Scherzer (9-1) struck out 12, walked one and retired 24 of 27 batters. It was the eighth time this season he reached double figures in strikeouts and the 72nd time in his career.

“He had a really good fastball tonight. I should say a great fastball,” manager Dave Martinez said. “Man, it was 96, 97 (mph), it was over the plate. And his slider was really, really sharp.”

The only runner to reach against Scherzer in the first six innings was Chris Davis, who singled in the second. After Manny Machado doubled in the seventh and Mark Trumbo drew a walk, Scherzer fired a third strike past Davis to end the threat.

He completed his standout performance with a perfect eighth.

“When I can throw all my pitches for strikes, that’s when I can work ahead in the count,” Scherzer said. “I had rhythm and the ability to work both sides of the plate.”

He was way too good for a Baltimore team that ranks 13th in the 15-team AL in batting average and runs. This was the 13th time in their past 15 games that the Orioles failed to score more than three runs.

“We’ve just got to figure out a way for our offense to get some type of consistency because it’s been a challenge for us,” manager Buck Showalter said.

Sean Doolittle gave up two singles in the ninth, but notched his 13th save.

With no outs and two on, Craig Gentry inexplicably tried to steal third and was tagged out in a rundown.

“That doesn’t look good because of the results and the chance we had there,” Showalter said. “But we still had two more outs after that.”

Machado followed with a routine fly ball and the game ended when Jonathan Schoop popped out into a swirling mist.

Harper moved into a tie with Mike Trout for the major league lead in homers when he connected on a 3-2 pitch from rookie David Hess in the third inning for a 1-0 lead.

Making his fourth major league start, Hess (2-2) proved to be a worthy opponent to the 33-year-old Scherzer. The young right-hander gave up one run and four hits over six innings.

Hess was replaced by Miguel Castro, who yielded an RBI single to 19-year-old Juan Soto in the seventh.

ATLANTA (AP) — Brandon Nimmo drove in a big run in the ninth inning to give the New York Mets a three-run cushion.

They didn’t want to give the Atlanta Braves a chance at another last-gasp rally.

“It’s just kind of scary out there when the Braves come up in the bottom of the ninth and we’re only up by two runs or so, especially on this road trip,” Nimmo said. “We’ve had some tough losses, so to be able to get that last run was really big.”

Atlanta dropped into second place in the NL East, one-half game behind Washington, the two-time defending division champion that begins a four-game series at SunTrust Park on Thursday.

It was a much-needed reprieve for the Mets, who had lost seven of nine and are 16-25 since starting the season 11-1.

Poor play and injuries have haunted New York the past few days, but manager Mickey Callaway had a good feeling when shortstop Amed Rosario cleanly fielded a hard grounder in the eighth to start a double play and strand a runner at third.

“It’s the play that we’ve been lacking,” Callaway said. “We needed to get it turned, and that was probably the difference in the game.”

The Braves had rallied to win two of the first three games in the series in the ninth, but they couldn’t muster a comeback this time, going down in order as Robert Gsellman earned his second save. Callaway used his usual closer, Jeurys Familia, to face the top of Atlanta’s order in the eighth.

Familia wasn’t sharp, but he got Nick Markakis to ground the ball to Rosario and prevent another night of late drama from the Braves.

“I had a good feeling right there and then they made a great play on Nick’s ball,” Atlanta manager Brian Snitker said. “That thing was two inches from being a base hit and here we go.”

The defending AL Cy Young Award winner allowed three hits, struck out 10 and improved to 4-0 with a 0.33 ERA in four starts against Central Division teams this season.

Melky Cabrera drove in three runs off Reynaldo Lopez (1-4) and Michael Brantley extended his MLB-high hitting streak to 19 games for Cleveland, which used the series to gain some confidence and momentum. The Indians have scored 43 runs during their win streak.

With two out and runners on first and second, Arcia stopped a 0-for-15 slide with a base hit against Sam Tuivailala (1-1).

Jeremy Jeffress (5-0) got the win despite allowing two runs in the top of the seventh. Corey Knebel struck out Jose Martinez for his fifth save.

Martinez tied for the major league lead with his 18th homer, snapping a 2-2 tie in the sixth.

Eduardo Nunez hit a solo homer and an RBI double for Boston, which has won nine of 11 and has the best record in the major leagues at 39-17.

Teoscar Hernandez hit a two-run homer for the Blue Jays, who have lost 13 of 17. Sam Gaviglio (2-1) gave up four runs in six innings.

Eduardo Rodriguez (6-1) struck out seven in 6 2/3 innings for Boston, and Craig Kimbrel got three outs for his 18th save.

Scott Schebler added a tiebreaking two-run drive in the sixth, helping the last-place Reds salvage the finale of the three-game set. Joey Votto and Eugenio Suarez each had three hits.

Both of Cincinnati’s homers came off Patrick Corbin (5-2), who gave up a season-high six runs and eight hits in six innings.

NEW YORK (AP) — That’s it for Yankees-Astros this season.

At least until October.

Gary Sanchez snapped an 0-for-19 slump with a two-run single and the Yankees took two of three from the reigning World Series champions this week to win the season series 5-2. Houston defeated New York in the 2017 AL Championship Series, with the home team winning all seven games.

DENVER (AP) — Brandon Crawford kept up his May hitting surge by lining a pair of singles, Gorkys Hernandez had a diving catch in center field to thwart a rally, and the San Francisco Giants avoided being swept with a 7-4 win over the Colorado Rockies on Wednesday night.

Derek Holland (3-6) settled down after giving up a three-run homer to Nolan Arenado in the first. The left-hander allowed four runs in five innings to help the Giants snap a three-game skid.

KANSAS CITY, Mo. (AP) — Mike Moustakas helped the Kansas City Royals take a nine-run lead in the second inning. They nearly gave it all away.

Moustakas homered, doubled and drove in four runs in the first two innings, Jorge Soler went 4 for 5 with a home run, but the Royals nearly blew the big lead before holding on for a 11-8 victory over the Minnesota Twins on Wednesday night.

Moustakas’ double in the first scored Jon Jay and Alcides Escobar. Moustakas’ 12th homer was a towering two-run shot in the second that just made it into the front row of the right-field seats and barely fair.

According to Statcast, it had a 46-degree launch angle, the highest in the majors this season, and carried 339 feet.

“I knew I hit it good, but I just wasn’t sure if it would stay fair and if it was going to go far enough,” Moustakas said. “That was a high one for sure.”

The Royals sent 11 men to the plate in a seven-run second to build a 9-0 lead. Soler nearly had a two-run homer in the inning, but after a review it was changed to a run-producing double. The second inning also included Ryan Goins’ two-run triple.

Every Royals starter had scored in the first two innings, but it almost wasn’t enough.

The Twins chipped away at the Royals’ lead, including bases-empty home runs by Brian Dozier and Ehrie Adrianza in the fifth and sixth innings, respectively.

“We fought back and then getting right back in the dugout,” Dozier said. “We were right where we needed to be as far as momentum shifting our way. We just couldn’t capitalize on it.”

Miguel Sano hit a two-run double in the Twins’ four-run sixth and scored on Eduardo Escobar’s two-out single, cutting the Royals’ lead to 9-8. Brian Flynn then struck out Max Kepler to end the sixth with runners on second and third, preserving the Royals’ lead.

Sano had a RBI single in the third and has hit in 17 consecutive games against the Royals with 30 RBIs in that span.

Hunter Dozier led off the Kansas City seventh with his first career home run. Soler homered in the eighth for his fourth hit, matching his career high.

Kevin McCarthy (4-2), the fifth of seven Kansas City pitchers, retired all four batters he faced and earned the victory.

“I didn’t want to use McCarthy today,” Yost said. “He’s been in four out of five, but we were at the point we had to. He came in and did a phenomenal job.”

Kelvin Herrera protected the lead with a spotless ninth for his 12th save.

Twins rookie right-hander Fernando Romero (3-2) retired only five of the 15 batters he faced. Romero allowed eight runs and nine hits, a walk and a sacrifice fly. His ERA jumped from 1.88 to 4.15.

“They were jumping me from the first pitch,” Romero said. “They were just hitting everything.”

Jay singled in the seventh to extend his hitting streak to 12 games. Jay finished May with a .368 average and leads the majors with 43 hits in the month.