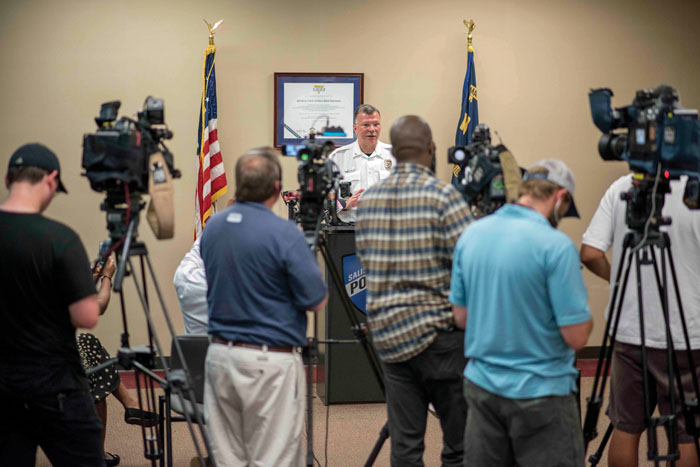 SALISBURY — A Salisbury police officer was placed on administrative leave Thursday after shooting a bank robbery suspect who had led officers on a high-speed chase that ended in Thomasville.

Along the way, the suspect stabbed someone who tried to subdue him outside a hobby store.

The officer’s name has not been released, but Police Chief Jerry Stokes said he is a very experienced law enforcement officer.

“This is a normal duty when an officer is involved in a use of deadly force,” Stokes said.

During an afternoon news conference, Stokes said that at 12:15 p.m. Thursday, a man entered First National Bank at 322 E. Innes St. and stole an undetermined amount of money.

It’s not clear if the suspect gave a note to the bank employee or verbally said he was robbing the bank.

The driver refused to stop, and the officers followed in a vehicle pursuit that ended in Thomasville. The driver traveled at speeds in excess of 100 mph.

Officers deployed stop sticks that deflated the tires on the suspect’s vehicle. The driver pulled into a parking lot at 1101 Mendenhall St. in Thomasville, the location of Anderson RC Hobby Shop.

The driver got out of his vehicle and tried to run into the building. Someone outside the store saw the suspect get out of the vehicle and stepped between him and the door of the shop.

The suspect produced a knife and stabbed that person multiple times.

Officials said later that that person’s injuries are not life-threatening.

Law officers then pursued the suspect on foot, Stokes said.

They confronted the suspect and one officer used a Taser to try to take the suspect into custody. The Taser was ineffective.

Other people inside the hobby shop were holding the door closed as the suspect, still armed with a knife, tried to push his way into the store.

Stokes said it’s not clear if the suspect was under the influence of drugs or something else.

A Salisbury police officer, seeing that the suspect still posed a threat to officers and civilians, shot at the suspect at least one time. Only one officer fired.

Stokes said he is not sure how many times the officer fired but he could confirm at least once.

He said the officer was willing to forgo his own safety to engage and then confront an armed suspect.

Stokes said he has reviewed body-camera footage and he has no concerns that any Police Department policy was violated.

“I feel the officers did exactly what they needed to do in this situation,” Stokes said.

He said the suspect was injured but he did not know the extent of his injuries, though he said they are life-threatening. He did not have the identity of the suspect at the time of the news conference.

A second person who was in the vehicle was taken to the hospital for an unrelated medical condition.

“There’s no telling what this could’ve escalated to if the officers hadn’t been there to take action to prevent that threat from getting into the store,” Stokes said.

Stokes said he believes the suspect is not from Salisbury.

The State Bureau of Investigation is investigating the shooting.

Stokes said the information released Thursday is preliminary and that the investigation is ongoing.

In the trenches: Code officer has seen a little…