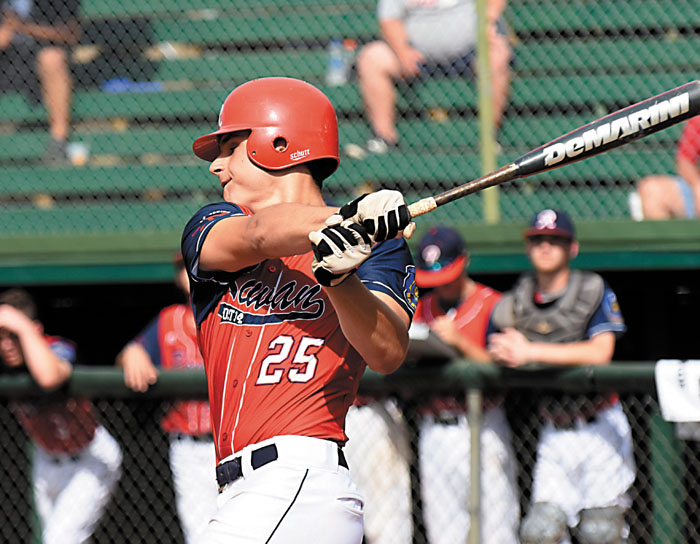 Rowan is starting to show serious power in the middle of its lineup. With Luke Barringer and Atwood launching two-run homers in the second inning, Rowan romped to an easy, 13-4 win against Greensboro Post 53 at Eastern Guilford High.

Thursday night’s road victory bumped Rowan’s record to 6-0. But the serious stuff hasn’t started yet. Rowan, which opened  the 2017 season with 18 straight wins, plays Concord at Mount Pleasant High tonight in the first game that actually counts in the division standings. WSAT 1280 will broadcast the action.

Rowan County employed four West Rowan pitchers. Lefty Daniel Durham was sharp for the first three innings, locating fastballs and mixing in curves. Daniel Sell (2-0) took the ball for a couple of innings and kept Greensboro sluggers off-balance. Rowan got some outs from sidearmer Scout Nichols before Carsen Bailey finished off Greensboro (2-2). Both of Greensboro’s losses have been to Rowan.

The top of the second proved decisive. Barringer’s long homer to left field, the second straight game he’s hit one out of the park, came with Wayne Mize on base and opened the scoring. Hayden Setzer’s two-run single made it 4-0. When Atwood connected, it was 6-0.

Rowan put together its second six-run inning in the third as the lead swelled to 12-0. John Owen just missed a homer, and his RBI double triggered the productive inning. Atwood and Setzer drove in additional runs with big hits.

Greensboro got a two-run double from Jaylen Guy in the seventh, but it was too little, too late.

Rowan had 11 hits after getting only three in its meeting with Greensboro at Newman Park … Rowan head coach Jim Gantt was back with the team Thursday. West Rowan head coach Seth Graham, who has been managing the Legion squad while Gantt was away for the Division II World Series,  couldn’t coach because of the NCHSAA dead period rule for the last 10 days of the second semester. That dead period lasts  until June 8. … Rowan is home on Saturday. … Division play got under way on Thursday in the Northern Division, with undefeated Davidson County shutting down Kernersville, 2-0, in a brisk, 79-minute game. … Surry Community College’s Jacob Tuttle drove in four runs to lead Kannapolis to a 9-2 win against Randolph County.