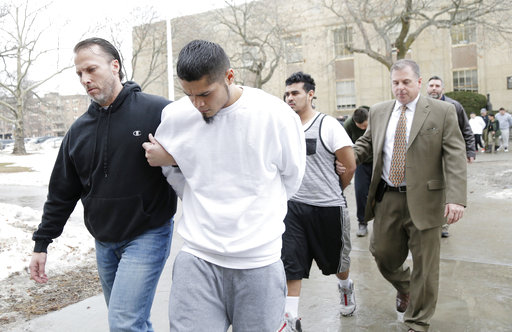 Suspected members of the MS-13 gang are escorted to their arraignment in Mineola, N.Y., Jan. 11, 2018. Nassau County authorities say a grand jury indicted alleged members of the notoriously violent MS-13 gang on a slew of charges including murder, conspiracy to commit murder and drug trafficking. (AP Photo/Seth Wenig)

WASHINGTON — Strangely enough, it was Notre Dame’s beloved Father Theodore “Ted” Hesburgh who, many years ago, gave me invaluable insights into the problems we face today with both the brutish Salvadoran gangs in our big cities and with the immigrant children challenging our borders.

Down in El Salvador, in the heart of Central America, in 1972, a man of great integrity, Jose Napoleon Duarte, was elected the Christian Democrat president of the country. But a troglodyte alliance of the old Salvadoran landowners and the repressive military rather quickly decided it would be better to just kill Duarte to get back to business as usual.

Duarte, a big, rumpled, handsome chap of a man blessed with an active Catholic conscience, had studied at Notre Dame and was well known to its famous president. In desperation, Duarte’s brother called Hesburgh.

Amazingly, the alarmed priest was able to contact the head of the CIA. In half an hour, a stranger called Hesburgh; it had been “arranged,” and Duarte would be badly beaten but thrown across the border to Guatemala, alive.

How on Earth had this been accomplished — and in half an hour? The stranger explained to Hesburgh:

“It was easy. We called the presidents of Venezuela and Panama and they called the general in charge in Salvador. They told him that if Duarte were killed, when it was his turn, no country in Latin America would grant him sanctuary.”

Father Hesburgh confided this story to me many years later, long after Duarte had become a very successful president. His story illustrates how to deal with the very different culture of Latin America.

Threaten the general with death? He would pose melodramatically and probably become a hero! But deny him a respectable place to hide, and he would be a man disgraced and disinherited. So let’s try to apply some of that common sense and wisdom to our problems with the MS-13 gang and the “unaccompanied minors.”

In El Salvador itself, with an overpopulation of 6.5 million in a tiny land where violence has been its history as people fight for space, the defense ministry estimates more than 50,000 people are involved with gangs, mostly MS-13. Murders average one per hour, and 95 percent of them are unsolved.

In the U.S., police now estimate there are 10,000 MS-13 members in 40 states, especially in Suffolk County on Long Island and in northern Virginia. Every day, The Washington Post contains the most gruesome and appalling stories, one after the other: young men — or women — beheaded in the woods, stabbed hundreds of times while gang members often gleefully celebrate. Satan worship is common.

Congressman Peter T. King, the respected New York Republican, recently said his prosperous suburban district on Long Island has become such a hotbed of MS-13 activity that authorities are “right now digging for bodies within a mile of my house.”

But Americans have paid little attention to these horrible events because it is President Trump who has been shouting about MS-13, and anything he says has to be wrong. This is a grotesque mistake.

They started coming in 2012. Lone children — from El Salvador, from Honduras, from Guatemala — at the border. We labeled them “unaccompanied minors,” or UACs. By 2014, they were a torrent, and approximately 200,000 have been detained at the U.S.-Mexico border since then.

For the U.S., it was more than just a question of what to do with them — practically, politically, morally. It was soon confirmed that MS-13 was paying smugglers to kidnap and/or coach these children to claim UAC status to get into the U.S. and then become part of the gang. Homeland Security Secretary Kristjen Nielsen, in a recent congressional hearing, made the astounding statement that some $500 million is going to cartels in smuggling fees ($8,000 per person from Central America, $27,000 from Bangladesh).

Father Hesburgh told me in 1981, “Immigration is one of the great sleepers in the world.” In the select committee on immigration he headed that same year, he came out for a reasonable but tough-minded, comprehensive and enforceable immigration control policy — one in which commonsensical Americans rise above the battle of the sentimentalists versus the authoritarians.

All these years later, we continue to suffer the consequences of failing to heed his advice.

Georgie Anne Geyer has been a foreign correspondent and commentator on international affairs for more than 40 years. She can be reached at gigi_geyer(at)juno.com.