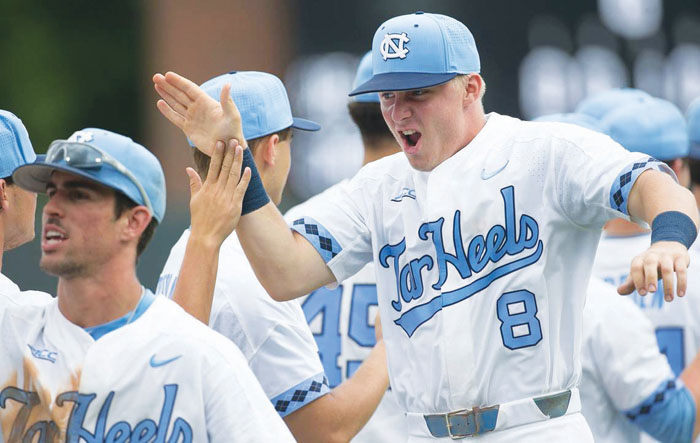 News and Observer photo ... UNC’s Ike Freeman (8) celebrates a victory over Virginia Tech with his teammates. Freeman, a sophomore and former star at East Rowan, has enjoyed a good season as the Tar Heels move into NCAA Tournament play.

CHAPEL HILL —  Hitting a baseball is said to be the toughest job in sports, and the University of North Carolina’s Ike Freeman offered serious support for that theory in 2017.

The stocky blond kid no one could get out when he played high school ball for East Rowan, suffered through extended empty stretches in the college ranks. Freeman batted .174 in 39 games  (14 starts) for the Tar Heels as a freshman with a one lonely homer and eight RBIs.

That was the opposite of what people expected to happen. Some wondered if Freeman’s glovework would prove consistent enough to stay on the field for the Tar Heels, but he actually did fine at second base. But his bat, the bat that had pounded away for a .518 batting average for East as a senior, making him the first Mustang to hit .500 in almost two decades, deserted him. There had never been any questions about his bat. Suddenly, there were all kinds of questions.

“A lot of things happened my freshman year,” Freeman said in a phone interview. “I’d always hit, so I came to Carolina with very high expectations for myself. But the adjustment from high school pitching to ACC pitching was a huge adjustment to make. I started to struggle, and when I struggled, I lost my confidence. You can’t do anything without confidence.”

Jump ahead a year and Freeman, the sophomore, is a completely different player as Carolina (38-18) prepares to host a regional game against North Carolina A&T on Friday afternoon in the NCAA tournament.

He’s the starting shortstop now, totally confident, a team leader, a run-producer batting in the No. 5 hole, a steady defender at a demanding position. He was named third-team All-Atlantic Coast Conference last week, and in a recent interview with the Raleigh News & Observer, UNC coach Mike Fox called Freeman “the team MVP” for the ACC regular-season champs.  Freeman doesn’t even look the same. At 5-foot-10, 199 pounds, he’s now built like a strong safety. His back looks as broad as Mike Trout’s.

“Just a lot of hours in the weight room,” Freeman said. “I played at about 185 pounds as a freshman, but now I’m at 199. I feel a lot stronger. It’s a pretty long season, a grind, but I still feel really good from the extra strength I’ve added and a yoga program.”

It’s been quite a ride for Freeman, the first Rowan player to make an impact for UNC baseball since North Rowan pitcher Daniel Moore (2001-03).

Freeman’s family tree was filled with wrestlers, but Ike’s father, Russ, knew by the time Ike was playing Pee Wees that his future would be on a diamond, not a mat. The kid could really swing a bat and he loved baseball. He might be playing shortstop, but that didn’t stop him from chasing the balls that went into right field.

When he was a freshman, Freeman started on the varsity at second base for coach Brian Hightower’s Mustangs. By his senior year, he was a dazzling shortstop. In the batter’s box, he was a line drive waiting to happen. Hitting was simple for Freeman at East. Take the nibbling breaking balls away from pitchers who feared him and get ahead in the count. Then mash that 2-and-0 or 3-and-1 fastball. With that basic approach, Freeman won the Mark Norris Memorial Award as Rowan County’s Player of the Year in 2016 and claimed it in a landslide.

Freeman gained great exposure to college scouts through the South Charlotte Panthers showcase team. He was rated as one of the top 30 players in North Carolina and one of the top 500 nationally. A lot of schools wanted him. But as soon as UNC offered, he committed. Freeman had dreamed of wearing the light blue since childhood.

It was all so perfect for a while, but then Freeman crashed into a wall of adversity in Chapel Hill as a freshman. UNC was talented, and starting shortstop Logan Warmoth was as blessed as anyone on the squad. He was a first-round pick by the Toronto Blue Jays last June.

Freeman got a chance to start at second base, but he didn’t hit enough to hold the job. ACC pitchers proved much quicker and much trickier than the arms he’d seen in high school.

“Logan Warmoth was really a great teammate and did a lot of help me last year,” Freeman said. “But I started coming off the bench, and that was a role I’d never had, and I wasn’t great at it. I wasn’t used to pinch-hitting. That’s a tough job to try to go up there late in a ballgame and get a hit.”

He might have transferred after that discouraging freshman season, but he loved the school and the program, so he dedicated himself to getting better. Warmoth was gone. Shortstop was wide open. Freeman set his sights on proving he could be the guy.

“I looked at myself pretty hard and I realized I was never going to be a speed player who could leg out a lot of base hits,” Freeman said. “So I needed to be able to drive the ball more consistently then I had been. I made myself stronger with a lot of work and I put in a lot of extra time in the cages with (assistant coach) Jesse Wierzbicki.”

In the cage, Freeman eliminated the holes in his swing, sharpened his timing. When his sophomore season rolled around, he was ready to compete for the shortstop spot.

“I guess going into the preseason, I was considered a real long-shot,” Freeman said. “There were five us of us competing out there for the job, but then the coaching staff decided to give me the first opportunity. I was the shortstop for the first game. I was determined not to lose the position.”

Freeman went 3-for-6 in that first series, belted a 10th-inning homer to beat South Florida in the third game of the season, and established himself in the starting lineup. He’s never lost that grip. He’s started 55 of the Tar Heels’ 56 games. He’s slowly inched up the batting order from eighth, to seventh, to sixth, to fifth.

“Ike is one of those guys who can make adjustments to his game,” Hightower said. “He adjusts in the weight room, adjusts with his swing and adjusts defensively. He’s doing the things he needs to do to keep playing at that level. He keeps getting better.”

Freeman is batting .277 overall, but he hit .328 in ACC regular-season games. His most impressive number is 45 RBIs, third on the team. He has three homers.  He walks quite a bit and is a .368 OBP guy. He also makes  a lot of contact. He has more walks (24) than strikeouts (23). He’s made the routine plays at shortstop — and some tough ones. He recently ran off a string of 12 straight errorless games.

“It’s been a good season for me and for the team,” Freeman said. “It’s all about confidence. Last season if I went 0-for-4, I knew I wouldn’t be playing the next game. This year, even if I don’t get a hit, I know I’ll still be out there for the next one, and that relaxes  you. Last year, every time I went to the plate I was worried about getting a hit. This year, I just go up there looking to have a good at-bat. Draw a walk or put it in play, and let’s see what happens.”

Freeman says his most satisfying moment of the season was a bases-clearing double in the eighth inning against N.C. State on April 27. That one lifted the Tar Heels to a 6-5 win over the Wolfpack in Raleigh.

“That hit was pretty huge as far as our season and they’re obviously one of our rivals,” Freeman said. “The biggest thing for me, personally, was that I came back from having a couple of strikeouts in that game, some terrible at-bats, to get that key hit.”

UNC had three players selected in the first round of the 2017 MLB draft, but Freeman believes the current team is better equipped to make noise in the NCAA tournament.

“We set goals before the season, and one of those goals was to host a regional,” Freeman said. “If we can win that, we’ve got a very good chance to host a super regional. We’ve got a strong team. We’ve got better chemistry than last year, and we have a chance to do something. At the same time, we all realize there won’t be any easy regional games.”

Freeman will be eligible for the draft in 2019. His growth this season makes that a possibility. Scouts will want to see more doubles, more homers and a higher batting average, but it appears likely Freeman will keep getting better next season. Rockwell’s Freeman can take some inspiration from Kyle Seager, a former UNC infielder who grew up about 20 miles away from him in Kannapolis. Seager’s home-run power didn’t  blossom until he was a pro.

“Being drafted, that’s always been a goal, part of the big picture,” Freeman said. “But I’ve seen guys worry about the draft too much and I’ve learned from that. Next season, I”m just going to go out and play as hard as I can. If the draft is supposed to happen for me, it will.”

If it doesn’t, he can look forward to being a senior leader for the Tar Heels in 2020, with another shot at the draft.

For all the Tar Heels, the immediate focus is Friday’s game with North Carolina A&T. Also in top-seeded UNC’s double-elimination regional are Purdue and Houston.

N.C. State and East Carolina also are hosting regionals. The winner of each of the 16 regionals advances to a best-of-three super regional series. Super regionals will trim the field down to eight. Those eight survivors  head to the College World Series in Omaha, Neb., on June 16.