Caps hold off Knights to even Stanley Cup Final 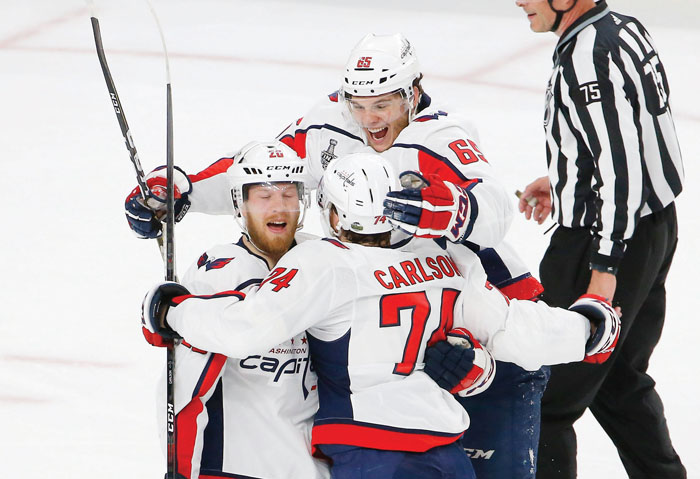 Holtby made 37 saves, Ovechkin scored a power-play goal and Lars Eller added a goal and two assists in the Capitals’ 3-2 victory over the Vegas Golden Knights in Game 2 on Wednesday night.

The Caps hung on through a scoreless third period for their first Stanley Cup Final victory in franchise history largely because of a bounce-back performance by Holtby, who was battered in Vegas’ 6-4 series-opening win.

Holtby capped his energetic performance with a jaw-dropping stick save with 1:59 to play, stretching back to rob Alex Tuch of a possible tying goal.

“We refocus and pick each other up and that’s a sign of a good team,” Holtby said. “That’s one of our strengths.”

Brooks Orpik ended a personal 220-game drought with the eventual winning goal for the Caps, who rebounded from a ramshackle loss in the opener and handed the expansion Golden Knights only their second home defeat — the first in regulation — in Vegas’ nine postseason games.

James Neal and Shea Theodore scored and Marc-Andre Fleury stopped 23 shots for the upstart Knights, who couldn’t summon their usual clutch magic in the third period, even with lengthy man advantages.

Washington lost leading scorer Evgeny Kuznetsov to an upper-body injury in the first period after a big hit from Vegas defenseman Brayden McNabb. The Caps avoided any hotheaded retaliation and concentrated on a gritty effort that was enough to even the series.

Game 3 is Saturday night in Washington.

The Caps are just 4-5 at home in the postseason, but they’ll ride a wave of momentum after going into the Golden Knights’ daunting home arena and taking away home-ice advantage in their first Stanley Cup Final in 20 years.

The Capitals have made the playoffs in 13 of 19 seasons since their only other trip to the Final in 1998, but hadn’t managed to get their fans back to the final round until this year. Capital One Arena in downtown Washington was packed with red-clad fans watching Game 2 on the videoboards.

The Caps improved to 9-3 on the road in the postseason after two games in this frequently chaotic series. The first two games of the Stanley Cup Final were split for only the third time in the last 13 editions of the NHL’s final round.

After a rough opener in Vegas, Holtby rounded back into something approaching his form in back-to-back shutouts to close the Eastern Conference finals. While his save on Tuch was the most impressive, he kept the Caps in charge with 15 saves in the third period, including a tenacious effort during a 5-on-3 advantage for 1:09 for the Knights.

The temperature on the Las Vegas Strip spiked to triple digits in the hours before Game 2, likely making it the hottest Final game in NHL history. But the heat didn’t fry the spirits of the fans who filled the plaza next to T-Mobile Arena to capacity before the puck dropped, continuing this gambling mecca’s fanatical support of its first major pro sports team.

After another elaborate, Vegas-style pregame introduction at T-Mobile Arena, the Knight took another early lead with their quick-strike offense and a little puck luck when Washington’s Dmitry Orlov misplayed Luca Sbisa’s long lob and allowed Neal to skate in easily on Holtby.

The goal was the fifth of the postseason for Neal, the gifted scorer left unprotected in last summer’s expansion draft after reaching the Final with Nashville.

Shortly afterward, Kuznetsov went straight to the dressing room after absorbing a high check from McNabb. The game immediately took on a nastier tone, and the teams played 4-on-4 hockey moments later after a prolonged scrum led to two penalties.

With extra space, Washington strung together several sharp passes culminating in Eller’s sixth goal of the postseason. The Danish forward failed to hit an open net on a rushed play for a potential tying goal late in Game 1.

Washington’s excellent power play finally got a chance early in the second period, and Ovechkin scored a vintage goal with his powerful shot from a sharp angle.

The Russian superstar led the NHL with 49 goals in the regular season and added 12 more in the Eastern Conference playoffs. After scoring the first Stanley Cup Final goal of his 13-year, 1,121-game NHL career, he skated to the glass with both arms raised triumphantly.

The Caps then silenced T-Mobile Arena when Eller got the puck to Orpik, whose deflected shot bounced fortuitously off the ice and beat Fleury. Orpik, the grinding veteran forward with a 2009 Stanley Cup ring from Pittsburgh, hadn’t scored since Feb. 26, 2016, adding up to the longest active goal-scoring drought in the NHL.

But the relentless Knights earned a power play and cut the Caps’ lead to 3-2 late in the second when Theodore slipped a long shot through heavy traffic.

Vegas continued its pressure early in the third, forcing Washington into two early penalties. But the Golden Knights failed to score with that two-man advantage, with Holtby repeatedly coming up big.

NOTES: The Golden Knights have scored the opening goal in the first period of all nine of their postseason home games. … Washington needs three more wins to become the second team in NHL history to win a Cup after trailing in all four postseason rounds, joining Pittsburgh in 1991. … T-Mobile Arena reported 18,702 fans in the sold-out building, setting a franchise record for attendance.