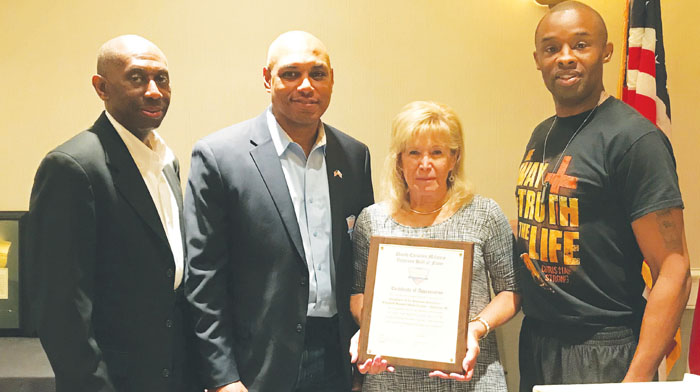 Rowan County's Dianne Hall received a certificate of appreciation from the N.C. Military Veterans Hall of Fame on behalf of the Elizabeth Maxwell Steele Chapter of the Daughters of the American Revolution for its help in making the inaugural induction ceremony a success. With Hall, from left, are retired Col Fredrick DuBois, Military Hall of Fame founder David Broadie and veteran Curtis Drafton. Photo courtesy of Dianne Hall

SALISBURY — Rowan County residents had a strong, behind-the-scenes role in the inaugural induction ceremony for the N.C. Military Veterans Hall of Fame, which had 22 men and women in the initial class.

The ceremony and reception were held May 19 at Crowne Plaza Executive Park in Charlotte.

Much promotion for the induction was done through retired Army Sgt. David Broadie, founder and chief executive officer of the organization. He visited veterans’ gathering places such as Frontier Coffee Shop in Salisbury, where veterans meet every Tuesday morning at Thelma’s restaurant, and Richard’s Coffee Shop and Living Military Museum in Mooresville.

Rowan County’s Elizabeth Maxwell Steele Chapter of the Daughters of the American Revolution, whose members provide regular service at Frontier Coffee Shop, also helped with the preparations and day-of duties for the Hall of Fame induction.

Troy Horton, a familiar ramrod and Navy veteran at Frontier Coffee Shop, was another important volunteer. Both the DAR and Horton received certificates of appreciation for their assistance.

Sandy Czuba, regent for the Elizabeth Maxwell Steele Chapter, presented Broadie and the N.C. Military Veterans Hall of Fame with a check for $250.

There were no Rowan Countians in the inaugural induction class for the Hall of Fame, which does not yet have a permanent home.

Dianne Hall, a member of the Steele DAR chapter, said she would someday love to see a building for the hall in Rowan County.

The Hall of Fame has an eight-member board of directors and two committee chairmen (nominations and community outreach).

In its mission statement, the organization says it “exists primarily to honor North Carolina veterans and to educate North Carolina youth and communities about heroes.”

To be eligible for Hall of Fame consideration, the veteran must be of good character and have been honorably discharged. To be considered a North Carolina veteran, he or she must meet at least one of three requirements: be a native of the state; must have entered military service from North Carolina; or must have lived in North Carolina at least 10 years.

The Hall of Fame has three categories of possible entry:

• Valor: The nominated veterans must have been awarded a significant award or awards for valor during an active combat tour.

• Achievement: The nominated veterans must have had a significant achievement contributing to the improvement of the military in an obvious manner, as confirmed by military recognition.

• Service: The nominated veterans had to have been honorably discharged, then made exceptional contributions to the community, state or nation.

Nomination forms and more information can be obtained at the Hall of Fame’s website, www.NCMVHOF.org.

Of these inductees, four were Medal of Honor recipients, including Jerry Crump, Durham, Lucas and Marm.