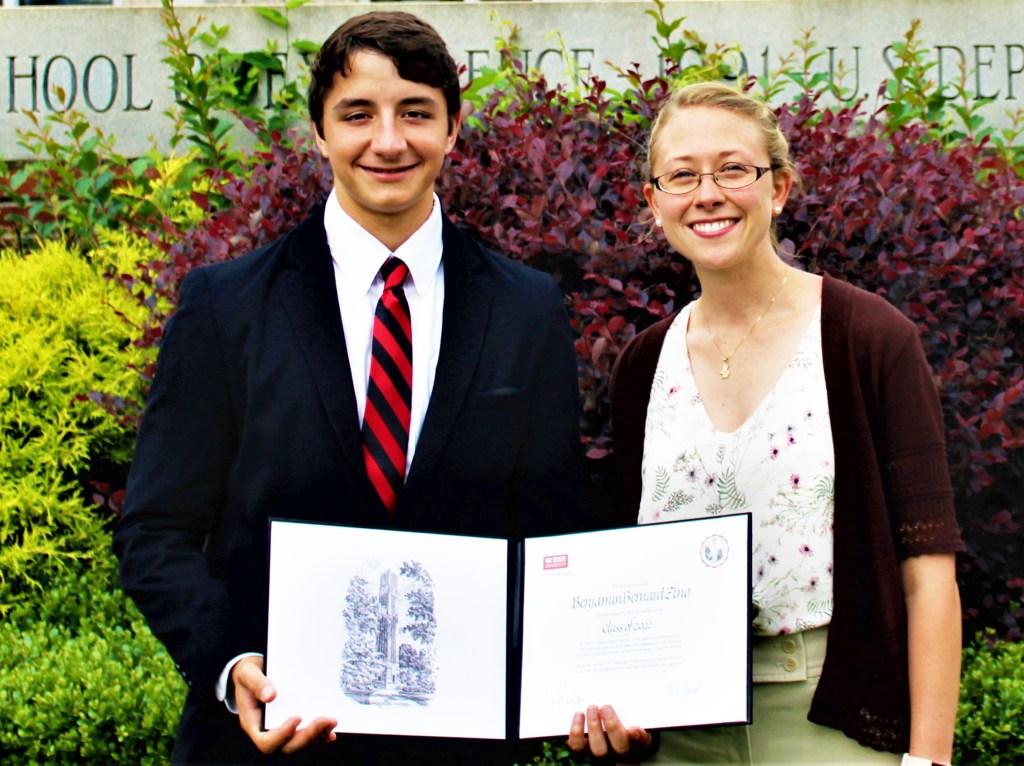 Ben Zino, 17, a senior at West Rowan High School, is one of 35 students in the world to be awarded the scholarship, which offers four years of fully paid tuition including room and board, books, computer and materials, travel, personal expenses and incidentals.

As far as Zino and his parents are aware, he is only the second West Rowan High School student to earn a Park Scholarship and the only Rowan County student to receive one this year.

Among the group are editors of school publications, students with part-time jobs, environmental activists, a musician who performed at Carnegie Hall, a published photographer and researchers of neurobiological changes in PTSD victims and of climate change impacts on local farms.

“Those kids are so incredible. … I didn’t even think I was qualified,” Zino said of his fellow applicants.

The application process is rigorous, with online screening, an in-person interview and a weekend program to help judges pick candidates. After making it to the finals and spending a week on campus with other candidates, Zino said he was excited but didn’t think he would be chosen.

“I just didn’t think it was me, after those kids,” he said.

While Zino participates in a lot of extracurricular activities — including Superintendent Lynn Moody’s Student Leadership Team, involvement with his church, volunteering at a homeless shelter and a part-time job at Dan Nicholas Park — he felt that he had fallen behind in academics.

But the scholarship committee members disagreed, and Zino was chosen from among 100 finalists.

Students are selected based on accomplishments and potential in scholarship, leadership, service and character. Park Scholarships also include opportunities for grants for undergraduate research and study abroad.

Zino said he was on a tour of Appalachian State University when he received a phone call from the Park Scholarship office.

“I was like, ‘Well, they’re going to say a bunch of nice things and say I didn’t get it.’ … And then she said, ‘We’re pleased to offer you the Park Scholarship.’ I didn’t know what to do. I didn’t believe her. It was incredible,” he said.

Zino plans to attend N.C. State and study conservation biology with a concentration in wildlife conservation. The subject has always been a passion of his. When he was 11, Zino won an essay contest and went on an excursion in the Western U.S. with National Geographic Explorers.

Currently, he works at the Nature Center at Dan Nicholas Park and runs a YouTube channel to educate the public about local wildlife — something he says is his passion.

“Animal Planet or Discovery tend to leave out the backyard ecosystems,” he said.

Zino said his accomplishment wouldn’t be possible without the support of his parents, his church, his Boy Scout troop and the community. The Park Scholarship is an accomplishment he feels belongs to all of them.

“It’s not like it was all me that did this,” he said. “… Without any of those people, something like this never could have happened.”

Zino will graduate with his class on June 9. His videos can be found at https://www.youtube.com/c/thewildreportofficial.