Way to go, Mom! Serena wins in her return to tennis 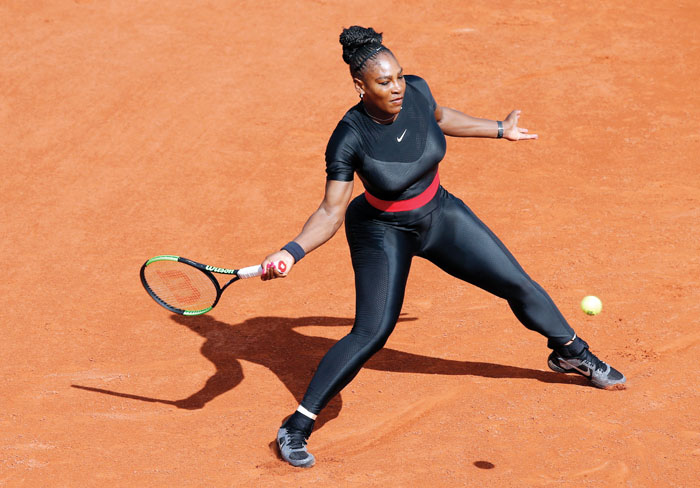 Serena Williams of the U.S. returns a shot against Krystyna Pliskova of the Czech Republic during their first round match of the French Open tennis tournament at the Roland Garros stadium in Paris, France, Tuesday, May 29, 2018. (AP Photo/Michel Euler)

PARIS (AP) — For all that has changed in the 16 months since Serena Williams last played in a Grand Slam tournament — she is now married and a mother — so much was familiar about her at the French Open on Tuesday.

The fashion statement, this time in the form of a black bodysuit with a red belt that she said made her feel like a “warrior princess.” The cries of “Come on!” The big serves that provided 13 aces. The returns that eventually produced three consecutive breaks of serve.

And, yes, the victory. Competing as a mom for the first time at a major, and only about nine months since giving birth to her daughter, Alexis Olympia, then dealing with postpartum complications, Williams edged 70th-ranked Kristyna Pliskova of the Czech Republic 7-6 (4), 6-4 at Roland Garros.

“Well, my priority is Olympia. No matter what, that’s my priority. I have given tennis so much, and tennis has actually given me a lot, and I couldn’t be more grateful,” Williams said. “She’s my priority, and I work everything around her.”

The 36-year-old American had not played in one of tennis’s biggest tournaments since winning the Australian Open in January 2017 for her 23rd Grand Slam title, breaking a tie with Steffi Graf for the most in the professional era.

Williams, the world found out later, was pregnant at the time. Her baby was born Sept. 1; Williams married Reddit co-founder Alexis Ohanian in November.

Williams eventually revealed that she had an emergency cesarean section, then encountered trouble breathing afterward because of a pulmonary embolism and needed a follow-up operation.

“Just literally not sure if I was going to make it or not at several different times,” Williams said. “A lot of people have really reached out, because they have so many similar stories, too. I feel like a lot of people don’t talk about it. They talk about the baby and how happy they are. But it’s a lot that goes into it with the pregnancy and with giving birth, and it’s called a ‘miracle’ for a reason.”

The first match of her comeback was in doubles alongside her older sister, Venus, for the U.S. Fed Cup team in February. She entered two tournaments in singles the next month, going 2-2. An absence of more than two months followed, until Tuesday in Paris.

So a woman who has spent hundreds of weeks ranked No. 1 is currently No. 451 and unseeded at the French Open, a subject of some debate: Should her past success accord her the protection a seeding offers? Williams faces 17th-seeded Ash Barty of Australia next.

“She’s a genuine champion,” Barty said. “What she’s done to be able to get back … is a pretty amazing thing.”

Tuesday’s return was striking, from Williams’ powerful shots to her outfit, which called to mind the “catsuit” she wore at the 2002 U.S. Open.

It was by far the most significant event of Day 3 at Roland Garros, even though there were so many other Grand Slam champions in action. Rafael Nadal finished off a rain-interrupted victory as he begins his try for a record-extending 11th French Open title. Maria Sharapova, a two-time champ in Paris, was pushed to three sets in a win. Garbine Muguruza, who beat Williams in the 2016 final at Roland Garros, beat another past champion, Svetlana Kuznetsova.

All eyes were on Williams, though. On the fifth point, she delivered an ace at 112 mph (181 kph). Moments later, the chair umpire intoned, “Jeu, Madame Williams,” — French for “Game, Mrs. Williams,” a change from the “Mademoiselle” used for unmarried female players.

Pliskova, a lefty whose twin sister upset Williams in the 2016 U.S. Open semifinals, actually hit more aces, 15. That’s the most anyone has hit against Williams since at least 2008, according to the WTA.

Indeed, Williams appeared to have trouble reading Pliskova’s serves early on. There were other blips, of the sort to be expected from someone who hasn’t played lately. Williams double-faulted seven times. She had nearly as many unforced errors, 25, as winners, 29.

But she is not simply skilled. She is smart, too, and she figured things out.

After trailing 3-0 in the tiebreaker, she reeled off six points in a row. After falling behind 2-0 in the second set, Williams came up with a trio of service breaks.

All was not perfect, of course. In the final game, Williams’ right foot gave way as she sprinted toward the net and she landed on her backside. At least she was able to laugh at that as she went to the sideline to towel off. A spectator yelled: “That’s all right, Serena! You still look great!”

After months of worrying more about diapers than drop shots, of breastfeeding for what she called “a really, really, really long time,” of organizing her practice schedule around her newborn’s nap schedule, Williams was back to doing what she’s most famous for, in an arena where she earned trophies in 2002, 2013 and 2015.

On Tuesday, she noted that she showed up at her news conference more promptly than she used to, so she could have more time to spend with Olympia.

“I don’t want her to ever feel like I’m not around. I’m a super hands-on mom,” Williams said. “Maybe too much.”

SECOND ROUND BEGINS, BUT NOT FOR HALEP

PARIS (AP) — A quick look at the French Open:

No. 1 seed Simona Halep starts her campaign against 83rd-ranked Alison Riske of the United States, in a weather-delayed first-round match postponed from Tuesday. Their game will be the first of five matches scheduled on the Philippe-Chatrier showcourt.

Seeded losers in the women’s first round: none.

STAT OF THE DAY

13 — the number of aces served by Serena Williams in her victorious return to Grand Slam tennis, following her marriage and the birth of her daughter.

“Jeu, Madame Williams” — French for “Game, Mrs. Williams” — used by the chair umpire in her 7-6 (4), 6-4 win against Kristyna Pliskova. That language was a change from the “Mademoiselle” officials use for unmarried female players.