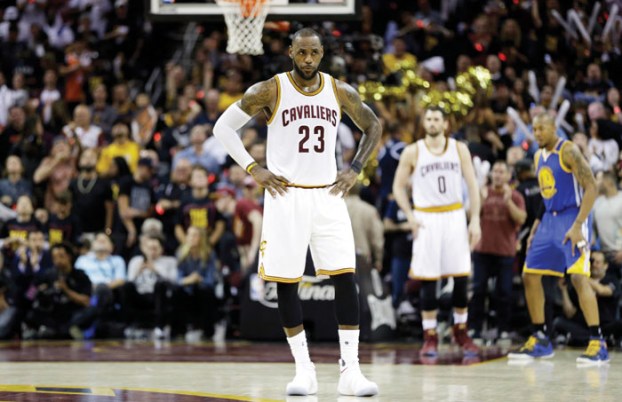 FILE - In this June 7, 2017, file photo, Cleveland Cavaliers forward LeBron James (23) reacts against the Golden State Warriors during the second half of Game 3 of basketball's NBA Finals in Cleveland. The odds are longer than a Stephen Curry 3-pointer. The Cavaliers are being given little _ or no _ chance in their fourth straight NBA Finals against the Golden State Warriors, who have been installed by Las Vegas as the biggest favorites in 16 years. (AP Photo/Tony Dejak, File)

Odds are against the Cavs in NBA Finals

NBA Finals: It's the Cavs and Warriors again 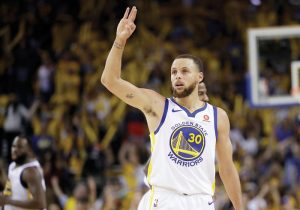 FILE – In this May 26, 2018, file photo, Golden State Warriors guard Stephen Curry (30) gestures during the second half of Game 6 of the NBA basketball Western Conference Finals against the Houston Rockets, in Oakland, Calif. The odds are longer than a Stephen Curry 3-pointer. The Cavaliers are being given little _ or no _ chance in their fourth straight NBA Finals against the Golden State Warriors, who have been installed by Las Vegas as the biggest favorites in 16 years. (AP Photo/Marcio Jose Sanchez, File)

LeBron James and the Cavaliers are being given little — or no — chance of winning their fourth straight NBA Finals matchup against the Golden State Warriors, who have been installed by Las Vegas bookmakers as the heaviest favorites in the past 16 years.

The Warriors are 12-point favorites to win Thursday’s Game 1, the largest spread in a Finals game since 1991, according to ESPN Stats & Information.

“We’re all focused on winning a championship,” Lue said Tuesday before the team flew to California. “We played our best basketball going into the playoffs. We’ve gotten better and better throughout the course of the playoffs. Our main focus and our main objective is to win a championship, so we can’t worry about what the outside guys are saying and who’s being picked. We know what we have here and what we’re trying to do.”

Cavs vs. Warriors, Part IV: an expected conclusion to an unpredictable season.

Lue said All-Star forward Kevin Love remains in concussion protocol and his status for the series opener is in question. Love sat out Cleveland’s Game 7 win at Boston on Sunday after suffering a head injury when he and Celtics rookie forward Jayson Tatum accidentally banged heads during the opening minutes of Game 6.

Love was replaced in the starting lineup by veteran Jeff Green, who stepped up and scored 19 points as the Cavs completed their comeback after trailing 2-0 and 3-2 in the series.

Love is expected back for the Finals, and Lue needs his experience against the Warriors, who like the Cavs rallied to win the Western Conference finals by taking Game 7 on the road.

There was a moment when it looked as if both Cleveland and Golden State could miss the Finals.

Since the playoffs opened, Cleveland has embraced the “Whatever It Takes” mantra that began as a catchy organizational slogan and morphed into a way of survival.

The Cavs have twice been pushed to seven games, overcome injuries and gotten much-needed contributions to ease the burden on James from role players Green, Jordan Clarkson and Larry Nance Jr.

However, in this series when every possession will be magnified, Lue will count on four players who have been around since the Cavs first met the Warriors in the 2015 Finals.

And because they won a championship in 2016 together, the core four of James, Love, J.R. Smith and Tristan Thompson share something special.

While Love has been solid, Smith and Thompson haven’t always come through this season for Cleveland.

One of the streakiest shooters in the league, Smith has had prolonged slumps. Thompson, who missed time with a severe calf injury, wasn’t a factor until Lue started him in Game 7 of the Indiana series.

Lue never lost faith in either player. It’s a trust that can’t be measured.

Unlike the past three Finals, Lue won’t have Kyrie Irving, traded to Boston last summer.

The All-Star point guard was Cleveland’s not-so-secret weapon, the one the Cavs turned to in order to spell James and keep the Warriors off-balance.

WHY THE GOLDEN STATE WARRIORS WILL WIN THE NBA FINALS

If there is a glaring hole on Golden State’s championship resume, it’s that the Warriors have never gone back-to-back.

The Warriors are about to win their second straight NBA championship and their third in the last four seasons — all of them coming at the expense of the Cleveland Cavaliers, who won’t have enough even if LeBron James plays to the absolute utmost of his capabilities. The Warriors have home-court advantage, and have three of the best four players who will appear in the series.

They’re just too good to lose.

If they were going to lose, it would have been in the Western Conference finals against the Houston Rockets. Houston was a team that was built for one purpose — beating the Warriors. And the Rockets might have done it, too, had Chris Paul’s hamstring not popped in the final seconds of Game 5 and forced him to the sideline for the rest of the series.

Golden State rallied in both Game 6 and Game 7, as Paul looked on helplessly. Yes, the Warriors caught a huge break. They won’t waste this chance.

The teams have changed mightily over the last four seasons. There were 20 players who appeared in first Cavaliers-Warriors game of the 2014-15 season — only eight of them will be in uniform during this series. Kevin Durant is in Golden State now, Kyrie Irving isn’t with the Cavaliers anymore, the benches are very different particularly in Cleveland’s case.

But the principals are still there: James, Stephen Curry, Klay Thompson, Draymond Green.

And over these four years since James returned to northeast Ohio, the Warriors are 17-9 against the Cavaliers. Golden State needed six games to beat Cleveland for the title in 2015, five games last season and if Andrew Bogut didn’t get hurt in Game 5 of the 2016 Finals the Warriors — who ended up blowing a 3-1 lead that year — probably would have won that series as well.

James might be playing the best basketball of his life. That’s why Cleveland is still in these playoffs.

Even he won’t be able to save the Cavs this time.

Cleveland looked like a team that couldn’t guard anyone in the regular season, and to its credit has greatly improved on that end of the court during this postseason. But facing Golden State will be such a bigger challenge than Indiana, Toronto and Boston could provide. And if the Warriors get Andre Iguodala back, their spacing will be even better and put further demands on the Cavs.

The Cavs won’t have any pressure on their shoulders. The Warriors will have it all, but after Curry, Durant and Thompson found a way to rally from 15 points down in Houston to win a Game 7 on the road and capture the Western Conference, Golden State will come into this series brimming with confidence.

That confidence will keep growing until they get handed another Larry O’Brien Trophy.

The pick: Warriors in five.

Way to go, Mom! Serena wins in her return to tennis

By Howard Fendrich AP Tennis Writer PARIS (AP) — For all that has changed in the 16 months since Serena... read more