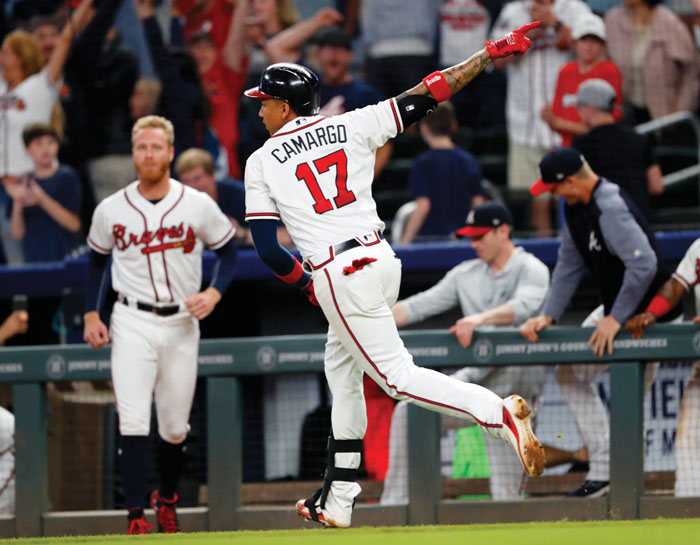 Atlanta Braves' Johan Camargo gestures he runs the bases after hitting a walk-off home run in the ninth inning of the team's baseball game against the New York Mets on Tuesday, May 29, 2018, in Atlanta. (AP Photo/John Bazemore)

By PAUL NEWBERRY, AP Sports Writer
ATLANTA (AP) — For both the Atlanta Braves and New York Mets, this felt so familiar.
Another stunning, walk-off win for the Braves.
Another excruciating day for a Mets team that seems downright cursed.
Johan Camargo homered with one out in the bottom of the ninth inning Tuesday night to give Atlanta a 7-6 win over the Mets, who squandered a pair of four-run leads and lost two more pitchers to injuries.
Camargo’s liner off Gerson Bautista just cleared the right-field wall , the Braves’ second walk-off homer in two days against their NL East rival.
“I knew who was pitching and how hard he throws,” Camargo said through a translator. “As soon as I hit it, I thought it might have a chance.”
Asdrubal Cabrera homered twice and Adrian Gonzalez also went deep for the Mets. But it wasn’t enough for an injury-plagued squad that keeps losing key players.
Before the game, the Mets placed Noah Syndergaard on the 10-day disabled list with a strained ligament in his right index finger. Then, in an almost surreal development, fellow starter Steven Matz had to leave with discomfort in his left middle finger after throwing three scoreless innings while New York built a 4-0 lead .
Matz said he hurt his finger in the top of the fourth, when the bat flew out of his hand on a swing. He wound up doubling in that at-bat, but began to feel some pain in his finger while standing on second base. It didn’t improve when he went back to the mound.
“It’s real unfortunate,” Matz said. “I know the bullpen has really been working their tails off, throwing a lot of innings. I was feeling really crisp out there. It’s just frustrating. It really is. But there’s nothing you can do.”
X-rays were negative, but it’s not known if the injury might affect Matz’s next scheduled start.
The Mets were up 6-2 when the Braves rallied.
Nick Markakis had an RBI double in the seventh, and Atlanta put up three more runs in the eighth off Jacob Rhame. After pinch-hitter Preston Tucker hustled to beat out a potential double-play grounder with the bases loaded, bringing in a run, Ender Inciarte drove a two-run triple off the center-field fence to tie the game at 6 .
Bautista (0-1) got the first out in the ninth.
Camargo then brought the game to a sudden end.
Not that it was a surprise.
The first-place Braves have won eight games in their final at-bat — five in walk-off fashion. Their last three wins at SunTrust Park have all come on the final swing.
“A different guy again,” Tyler Flowers said. “It was a tough game, but we just kept grinding. We gave ourselves a chance at the end of the game.”
Dan Winkler (2-0) earned the win, working out of trouble after the first two hitters reached base in the ninth.
The first pitch was delayed 41 minutes by the threat of an approaching storm, the third straight game in the series to be delayed by inclement weather. The teams played a day-night doubleheader Monday that didn’t end until around 1:30 a.m. Tuesday.
SANCHEZ RETURNS
Anibal Sanchez came off the DL to make his first start for the Braves since April 13.
His rustiness showed in a four-inning stint. The 34-year-old right-hander gave up five hits, four runs and two homers.
After Sanchez was lifted for a pinch-hitter, Matt Wisler chewed up some valuable innings for the Braves’ bullpen. He went four more innings, allowing two runs on four hits with four strikeouts.
TRAINER’S ROOM
Mets: Syndergaard’s return to New York to have his finger examined caught everyone off guard. An MRI confirmed the strained ligament, making him the third Mets player to go on the DL since the team arrived in Atlanta. In all, 11 New York players are sidelined with injuries. Now, the Mets have to worry about Matz as well.
Braves: RHP Mike Soroko is set to make a rehab start in the minors after getting through a bullpen session Tuesday with no issues. After making the first three starts of his big league career, the 20-year-old went on the DL with right shoulder discomfort.
UP NEXT
Mets: With Syndergaard out, struggling LHP Jason Vargas is moving up a day to start Wednesday’s series finale. Vargas threw only 67 pitches in his last outing Saturday, so the Mets decided to give him another shot on just three days of rest. He is 1-3 with a 10.62 ERA in five starts, having allowed 34 hits, six homers and 10 walks in 20 1/3 innings.
Braves: RHP Julio Teheran (4-1, 4.17 ERA) has not permitted a run in two starts against New York this season. He pitched seven scoreless innings but didn’t get a decision in a 4-3 win over the Mets on April 21. He faced New York again on May 3, putting up another seven innings in an 11-0 rout. In his career, Teheran is 9-5 with a 2.32 ERA against the Mets.

BALTIMORE (AP) — The season is barely two months old, and the Washington Nationals have already been asked to adjust to a new manager, overcome a rash of injuries and jump into bounce-back mode following a poor start.

With Bryce Harper leading the way, they’ve handled every obstacle while becoming the hottest team in the big leagues.

NEW YORK (AP) — Brett Gardner tied it with his second homer of the game, a one-out, two-run drive in the ninth inning, Gleyber Torres hit a winning single in the 10th and the New York Yankees rallied to beat the Houston Astros 6-5 Tuesday night.

The Yankees won despite making five errors — including two by Torres at second base — for the first time since 2014. They also came up with a startling defensive play in the 10th when Aroldis Chapman threw a 100 mph fastball to the backstop that took a fortuitous carom to catcher Gary Sanchez, who threw out Tony Kemp at third base.

Charlie Morton appeared set to win his 11th straight decision and become the American League’s first eight-game winner. Manager A.J. Hinch chose not to use closer Ken Giles for the third straight day and sent Chris Devenski to the mound with a 5-3 lead for the bottom of the ninth.

Miguel Anjudar walked, Torres struck out and Gardner drove a fastball just over a leaping George Springer at the right-field wall for his third home run in four games.

He wonders how much better it can be.

J.D. Martinez also had two of Boston’s six doubles as the Red Sox (38-17) won for the eighth time in 10 games. Only the 1946 Boston team that started 42-13 with Ted Williams and Bobby Doerr returning from World War II had a better start through 55 games.

PITTSBURGH (AP) — Anthony Rizzo has no intention of easing up at home plate, even after Major League Baseball said he should have been called out for interference when he took out Pittsburgh Pirates catcher Elias Diaz and sparked a debate about what is — and what isn’t — a legal slide.

Then again, if given the choice, the Chicago Cubs first baseman prefers to trot home instead. When he does, the Cubs are as dangerous as any team in baseball.

Rizzo shook off the boos and sparked a late rally with his ninth home run of the season as Chicago beat the reeling Pirates 8-6 on Tuesday night.