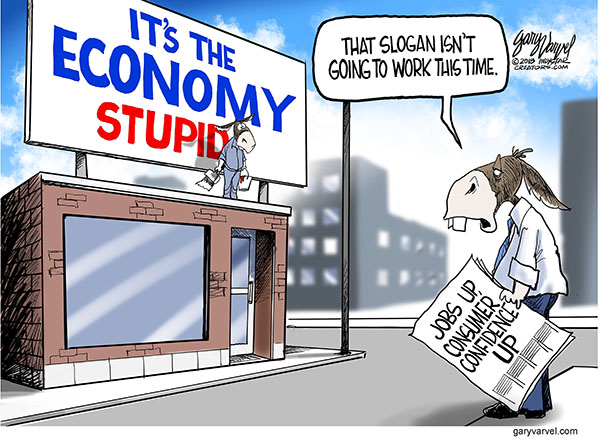 RALEIGH — In North Carolina and across the country, rank-and-file Democrats are counting on a big blue wave to wash over congressional, legislative, and local elections this year, as well as over gubernatorial contests in the majority of states that, unlike ours, elect their governors in non-presidential years.

Is this scenario possible? Sure. Its probability has declined in recent months, however, in large measure because people are feeling increasingly positive about the economy as a whole and their own prospects in particular.

On paper, it makes sense to imagine Democrats taking control of the U.S. House of Representatives and perhaps the U.S. Senate, breaking the Republican supermajorities in the North Carolina General Assembly, and winning lots of other races. Midterm elections usually go against the party occupying the White House. President Donald Trump has had net negative ratings since early 2017.

But right now, there is scant evidence of an impending Democratic tsunami. The polls aren’t consistent with it. Neither are the insights of Democratic insiders I know. They still expect to win races. They just don’t expect to blow out the Republicans, the outcome they had previously assumed (and the latter had previously feared).

The national polling on congressional races currently shows an average Democratic edge in House races of about three to four points. That’s better than a deficit, but not very impressive.

At this point in the 2006 cycle, which culminated in Democratic takeovers of both houses of Congress and most state governments, the party typically led Republicans by double digits.

Here in North Carolina, generic-ballot tests range from roughly even for congressional and legislative races (in the latest survey commissioned by the Civitas Institute) to Democratic advantages of three and seven points, respectively (in the latest Survey USA poll). Averaging all the polls conducted so far this year shows only a modest Democratic edge in the Tar Heel State.

As for the White House effect, at this point in the 2006 cycle President George W. Bush had an average approval rating of 37 percent and an average disapproval rating of 59 percent. Trump’s current spread is approximately 44 percent approval, 53 percent disapproval. That’s a negative spread, obviously, but not nearly as heavy a weight as GOP candidates were bearing in 2006.

It’s not because Trump’s personal failings are going unnoticed. In a recent Ipsos Public Affairs survey of 1,080 registered voters, conducted for Reuters, fewer than 40 percent of respondents said they approved of Trump’s performance on government corruption, Russia and “the way he treats people like me.” Yet his overall approval rating was 47 percent, vs. 51 percent disapproval.

Why? The difference consists of Republicans and Republican-leaning independents who dislike Trump’s behavior and character but agree with his handling of the issues they deem most important. Indeed, his overall approval is about 60 percent on both the economy and fighting terrorism.

I know I’m repeating myself here, but our politics has become intensely polarized by party. Most Republicans who didn’t much like Trump in 2016 voted for him, anyway, because they were repulsed by Hillary Clinton and the left-wing philosophy she represented. Most Democrats did the reverse. It takes a great deal — not just antipathy to the nominee of one’s “home team” — to dislodge people from their normal voting patterns.

It’s much, much harder to do that when there is neither a bad economy nor an unpopular war to run against.

At the moment, North Carolina’s unemployment rate of 4.4 percent is the lowest since the beginning of the 21st century. Incomes are rising.

Reflecting a combination of strengthening economic conditions and one-time adjustments related to federal tax reform, North Carolina’s state budget is headed for another significant surplus, which will allow lawmakers to continue reducing the tax burden while also providing substantial pay raises to teachers and other public employees.

Democrats have a message of change. They have resources and, in some cases, talented candidates to deliver the message. But to an increasingly optimistic electorate, it may end up sounding off-key.

John Hood (@JohnHoodNC) is chairman of the John Locke Foundation and appears on “NC SPIN,” broadcast statewide Fridays at 7:30 p.m. and Sundays at 12:30 p.m. on UNC-TV.