CHARLOTTE — Over the long holiday weekend, the national gas price average has held steady for five days at $2.97, signaling that prices may be stabilizing as we head into June. This development comes as crude oil prices start to fall following some of the highest prices in three-years.
​
Prices could be stabilizing across parts of the Carolinas as well. North Carolina’s average of $2.79 is only a two-cent increase on the week and South Carolina’s average of $2.64 has leveled off to the exact same price as it was a week ago.

“This is the first time we’ve seen some weekly differences in the negatives in a long time,” said Tiffany Wright, AAA Carolinas spokesperson. “Although some metro areas have still seen an increase, that increase has been minimal for the most part.”

Below is a breakdown of the price changes by metro area: 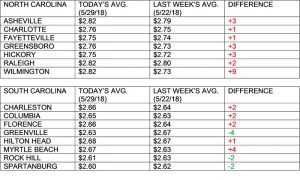