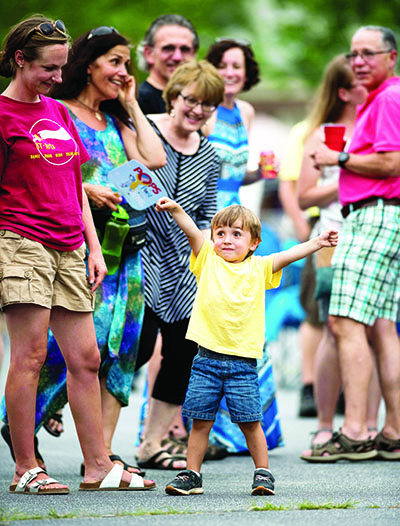 Caroline Stephenson (left) watches her 3-year-old son James dance to the music from the Salisbury Swing Band. Rain did not mute the thrill of the gathering in the open air for the 12th annual Salisbury Symphony Pops at the Post concert in downtown Salisbury on Saturday evening. Saturday, June 4, 2016, in Salisbury, N.C. JON C. LAKEY / SALISBURY POST

Laurel to the Salisbury Symphony’s upcoming Pops at the Post concert, set to begin at sundown this Saturday. Crowds will begin assembling in the Church Street parking lots across from the Salisbury Post earlier in the day. The Rowan Arts and Ag Tour will have displays  from 3 to 7 p.m. The Salisbury Swing Band performs from 5 to 7 p.m. And vendors open for business by 4 p.m. Concert-goers may start setting up chairs at noon. Maybe that gives you an idea of now eagerly the community looks forward to this free, downtown concert. The Salisbury Post started what became a series by sponsoring Pops at the Post for the company’s 100th anniversary in 2012. Now it’s everyone’s concert — a community-wide event with many sponsors. Thanks in advance to all who have a hand in what is sure to be a fun, family-friendly event.

Dart to the pressure that often comes with end-of-grade testing — and the inordinate importance placed on these exams. Traditional public schools start their testing today, and they’ll be in testing mode for several days. The standard advice for students is to get a good night’s rest, eat breakfast and relax; these tests generally are not make-or-break for students. But administrators must have a bit of test anxiety themselves, knowing the weight that the legislature’s performance letter grades give these tests. Will a school get an A, B, C, D or the dreaded F? Eighty percent of the letter grade is based on how many students pass the tests and 20 percent is based on student growth on the tests — that is, how much they improve. This breakdown tends to favor affluent schools while stigmatizing those with high poverty. But don’t worry, kids. Relax and take your tests. School administrators will be anxious enough for everyone.

Laurel to North Rowan High School for winning approval from the Rowan-Salisbury Board of Education earlier this month for a customized 2018-19 school calendar. Leaders in the North district have been trying to innovate to give their students better opportunities in life, and the calendar issue is a prime example. Rather than march in lockstep with all the other traditional public schools, North will begin classes sooner — Aug. 9 rather than Aug. 27. The purpose is twofold: to be able to schedule exams before the holiday break in December, and to get on the same schedule as Rowan-Cabarrus Community College. North has a high number of students in RCCC’s Career and College Promise Program, which gives them a leg up on both tech training and college classes. Now even more students should be able to take advantage of the program.