6 of a kind: Golden Knights outlast Caps in Final opener 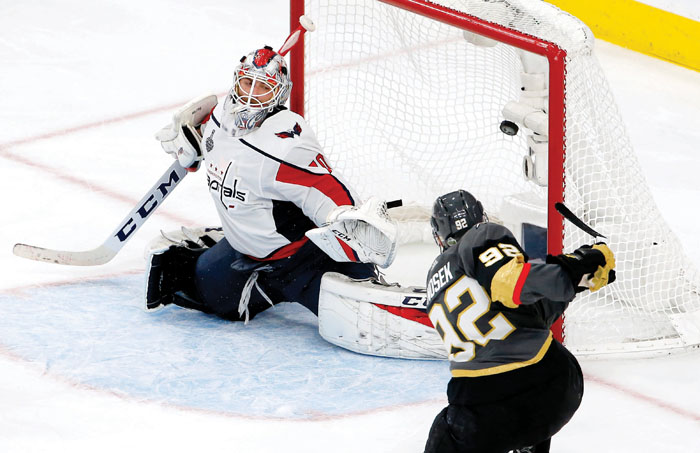 Tomas Nosek scored the tiebreaking goal midway through the third period, and the expansion Golden Knights opened an improbable Final with a thrilling 6-4 victory over the Washington Capitals on Monday night.

Marc-Andre Fleury made 24 saves in an occasionally shaky performance, but the three-time Stanley Cup winner’s new teammates carried the goalie who has so often carried them with a relentless outburst of offense.

The Eastern Conference champion Capitals hadn’t given up this many goals in 29 games since March 18, but they hadn’t seen anything like this charmed run by the upstart Knights.

“We put fun ahead of everything, and you can tell,” said Ryan Reaves, who scored the Knights’ tying goal in the third period. “Guys have are having fun and they’re smiling.”

With its sellout crowd of hometown fans at deafening volume all night, Vegas put its usual speed and relentlessness on full display while overcoming a third-period deficit to win the opener of a matchup between two franchises seeking their first Stanley Cup titles.

Braden Holtby stopped 28 shots for the Capitals, whose first Stanley Cup Final game in 20 years was a defensive nightmare. Washington still had chances to win, but never slowed the Knights.

Tom Wilson got credit for the goal that put the Caps up 4-3 early in the third period when Fleury back-heeled a loose puck into his own net, but Reaves evened it 91 seconds later for Vegas.

Nosek then put the Knights ahead after Shea Theodore kept the puck in Washington’s zone, sidestepped a defender and fired a beautiful cross-ice pass to the Czech forward, who buried a one-timer for his second goal of the playoffs.

Colin Miller, William Karlsson and Reilly Smith scored early goals before Nosek added an empty-netter for the Knights, who are three wins away from one of the most improbable championships in recent North American team sports history. Just 342 days after the Knights selected the backbone of their first roster in the expansion draft, Vegas had another party on the Strip with its remarkable collection of castoffs.

The Golden Knights’ playoff pregame shows have been a celebration of Vegas showmanship, and their first Final game started with an extravaganza including archers, a trebuchet and a spectacular light show.

And then the Knights and Caps put on a high-energy production of their own with plenty of fireworks and drama.

With none of the customary caution or high-pressure effects often shown by teams and players in their first game on the NHL’s biggest stage, Vegas and Washington jumped right into an up-tempo thriller. Vegas had outscored its opponents 10-0 in the first period at home during the playoffs, but the Caps got two goals.

Miller scored the Knights’ first goal with a big shot on a power play, ending Holtby’s scoreless streak from his back-to-back shutouts to end the conference finals at nearly 167 minutes. But Washington calmly surged ahead later in the first period with goals 42 seconds apart from Connolly and Backstrom.

Smith put the Knights back ahead early in the second period after a stellar sequence of speed and puck movement, but Carlson tied it a few minutes later after being left alone in front of Vegas’ unmanned net.