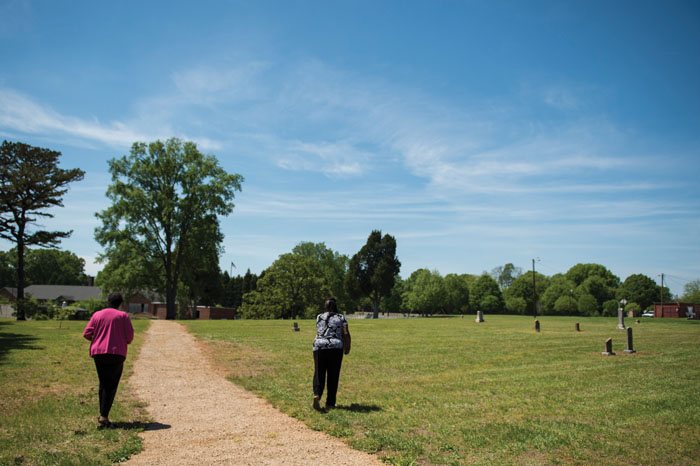 Johnnie Mae Tracey, left, and Emily Perry walk through the Dixonville Cemetery together on May 2, 2018. (Photo by Rebecca Benson)

SALISBURY — The city’s Dixonville-Lincoln Memorial Project Task Force is set to hold a groundbreaking ceremony May 31 at 10 a.m. at 210 Old Concord Rd. to celebrate the start of construction of a project to honor a pre-Civil War African-American cemetery.

The Dixonville Cemetery was the first city-owned cemetery for the burial of African-Americans. Fifty years ago the grounds were a centerpiece of the tight-knit Dixonville neighborhood, providing a well-worn pathway leading children to the nearby Lincoln Elementary School.

The Dixonville-Lincoln Memorial Project — a three-phase initiative — will consist of a memorial walk to enhance the front of the cemetery with patterned sidewalks and granite steps; an interpretive walk where visitors may gather, study and reflect on the history of the cemetery; and a proposed revitalization of the Lincoln School.

According to Salisbury historian Betty Dan Spencer, there were almost 500 documented burials at the cemetery.

The oldest gravesite known is that of Mary Valentine, who died in 1851.

This supports the supposition that African-Americans may have been interred on the property before the city of Salisbury purchased the acres for a cemetery on Sept. 30, 1874.

Other prominent African-American Salisburians are buried there, including Bishop John Jamison Moore, who founded the AME Zion Church in western North Carolina, and the Rev. Harry Cowan, a minister who was born into slavery but went on to establish 49 churches and baptize 8,500 people.

Although many of the grave markers have disappeared, Dixonville Cemetery remains a vital link in Salisbury’s collective heritage.

The goal of the revitalization is to increase the prominence of the early African-American cemetery, interpret its history and pay respect to those buried.

Since its founding, the task force has made basic repairs to existing gravestones, installed a historical sign, restored a significant footpath that bisects the property from Old Concord Road to Lincoln School and installed a seating area dedicated to the memory of Fred M. Evans, a former Dixonville resident and Memorial Task Force Chair.

Salisbury City Council, the National Society of the Colonial Dames of North Carolina, the Blanche and Julian Robertson Family Foundation, the Margaret C. Woodson Foundation and other private donations have contributed to the memorial’s construction, which has an estimated cost of more than $570,000.

Unity Paving Inc. is scheduled to begin construction of the Dixonville-Lincoln Memorial Project in early June, with an anticipated completion date in July.

To learn more about the Dixonville-Lincoln Memorial or to invest in Salisbury’s past, present and future heritage, visit www.dixonvillememorial.com.

For Hervieux family, patriotism is a family commitment