A nurse’s story: At the G.I. Memorial House, the memory of Edna Parker and others lives on 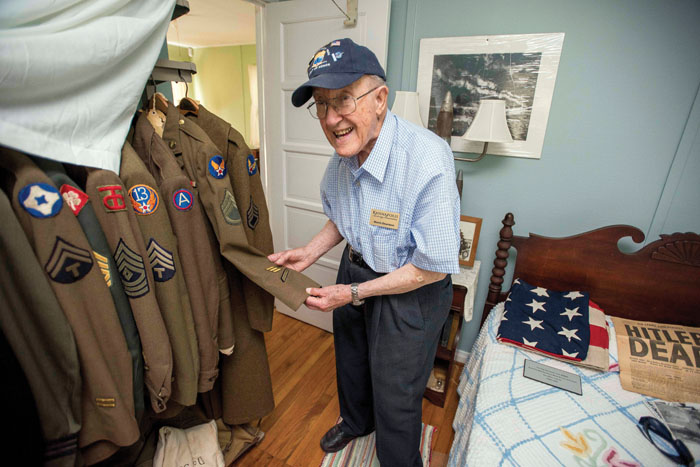 JON C. LAKEY / SALISBURY POST Norris Dearmon, Kannapolis History Associates, uncovers the small uniform collection at the restored house at 905 King Street, known as the G.I. House, which is a permanent memorial to the veterans of all wars. Wednesday, May 23, 2018, in Kannapolis, N.C.

KANNAPOLIS — In the years after she retired from the Army, Lt. Col. Edna Parker still liked to exercise, the walks often taking her past the St. Joseph Street home of historian Norris Dearmon.

Parker sometimes stopped to chat, and their conversations usually came around to the military. Both were veterans of World War II, but while Dearmon served as a dental assistant in the States and the not-as-dangerous hinterlands of Iceland, Parker was in the thick of things as a surgical nurse in North Africa, Italy and Europe.

Her hospital operating rooms were of the portable kind — tents mostly.

“She was closer to the front line than anyone,” Dearmon said. “… I’ve never seen a nurse, or woman, who had that kind of battle experience and with that many battle stars. There may have been one, but I doubt it.”

Parker would go on to serve during two more wars — Korea and Vietnam — before retiring in 1965. In World War II, she had served in the 3rd Auxiliary Surgical Unit. During Korea, she belonged to the 8055 MASH outfit.

Between today — Memorial Day — and into the fall, it is usually the 95-year-old Dearmon who mans the G.I Memorial House Museum at 905 King St. Dedicated to the veterans of all wars, the G.I. House is open from 2-5 p.m. today and those same hours on the first Sunday of a month otherwise.

Inside and out, the G.I. House is a step back into time — those years immediately after World War II — when textile magnate Charles Cannon provided 100 of these prefabricated houses to address a shortage for soldiers coming back home.

The Kannapolis area where most of these tiny, four-room houses were erected became known as “G.I. Town.” Dearmon and other faithful members of Kannapolis History Associates were able to acquire and save this particular G.I. House, the last unaltered structure of its kind.

They transformed it into a jewel of a museum, something that complements their Hinson History Room on the A.L. Brown campus at 415 E. First St.

At the G.I. House, Dearmon leads visitors to a back bedroom where mementos of Lt. Col. Parker’s career lie on top of the bedspread. Donated by her family, they include a framed display of her many medals, a photograph of Parker in uniform, newspaper articles and documentation detailing the highlights of her military record, from her entry into the service on Feb. 1, 1941, to her discharge on March 1, 1965.

The names of her many posts, campaigns, battles and awards are listed, too.

Her medals, citations and ribbons were many. She received at least 10 battle stars — Dearmon thinks there were actually more. Parker also was the recipient of the Bronze Star in 1944 and the Legion of Merit, besides the Army Commendation Medal with two Oak Leaf Clusters.

Dearmon moves to the corner of the bedroom and lifts a sheet, revealing a dress form carrying one of Parker’s Army nursing uniforms, complete with hat. A copy of her newspaper obituary sits on the dresser nearby.

“She was not a big lady by any stretch,” Dearmon says, looking at the uniform. “She was not tall.”

Because of the relentless historian that he is, Dearmon tracked down numerous newspaper articles from the old Daily Independent in which Parker was mentioned. Most were published during World War II or some of the years afterward as she rose in rank.

In a story from Sept. 9, 1945, just days after Word War II officially came to an end with Japan’s surrender, the Independent society writer caught up with Parker on a visit home.

“Deeply tanned from a week spent on the Riviera and a few pounds heavier than when she left the states,” the article says, “Lt. Edna Parker is a perfect picture of health in spite of concentrated foods and harrowing experiences as a war nurse along the European front lines during the past three years.

“Happy to be home, Kannapolis’ only woman Bronze Star holder says she is tired of living out of a suitcase and wearing drab colors. What she wants to do is buy new clothes, eat fresh fruits and vegetables and rest.”

In Europe, Parker had served with the famous 51st Field Hospital in France. By following the First Army in all of its big pushes, the hospital unit earned a reputation for being first in everything.

Parker received her Bronze Star at the Battle of the Bulge.

“She has no idea how many patients her units served,” the story continued. “There was always a stream of casualties from the front lines, but only the non-transportables or litter cases were given attention that near the battle zone.

“Commenting on the remarkable record of her unit, Miss Parker says that only one member was lost and that mishap occurred in Normandy.”

The G.I. House is a great place to sit and talk about these kinds of things, and Dearmon often has the time, if you do.

Parker was a Cabarrus County native who graduated from Kannapolis City Schools in 1931 and the Presbyterian Hospital School of Nursing in Charlotte in 1937. Her post-graduate work took her to New York for training in operation room techniques and management.

Dearmon, whose work ushered Cannon Mills into the computer age in the 1950s and beyond, fashioned a 43-year career for the textile company before he retired in 1985. Since then, he has become the foremost authority on Kannapolis history.

But something keeps nagging Dearmon. He wishes he would have spent more time talking with Lt. Col. Edna Parker when she came walking by his house.