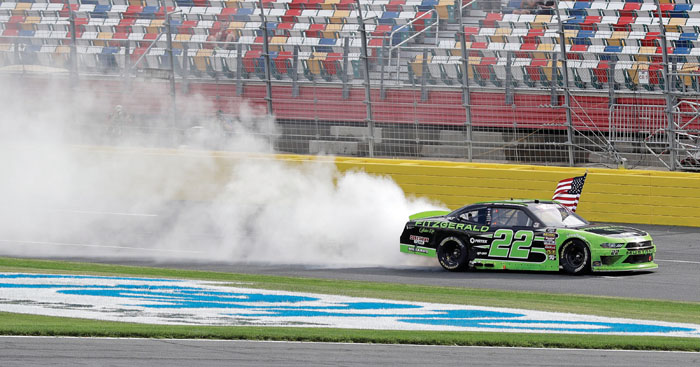 Keselowski overcame a humid afternoon and an hour-long rain delay Saturday at Charlotte Motor Speedway to become the first repeat winner on the Xfinity Series this season.

“I don’t know if I have ever been that hot in a race car,” Keselowski said. “It was smoking out there.”

“Yeah it has been a tale of two cities compared to the Cup Series where there have been multiple repeat winners,” Keselowski said.

Keselowski took his final set of tires earlier than some of the drivers, a decision crew chief Brian Wilson said he later regretted. But Keselowski benefited from the handful of yellow flags in the final 40 laps that saved some wear and tear on his tires.

Bell thought he had a chance to overtake Keselowski on the final restart because he had fresher tires, but said “I just didn’t execute.”

“We probably had the right strategy but the old Cup guy just beat us,” Bell said.

Keselowski’s win comes just a few days after team owner Roger Penske was selected to the NASCAR Hall of Fame.

He quickly turned his attention to the upcoming Coca-Cola 600 on Sunday.

“It would be really cool to sweep Memorial Day weekend,” Keselowski said.

BUSCH’s DAY: Kyle Busch, who led a race-high 93 laps and won the first two stages of the race, wrecked with 38 laps to go after an aggressive move on a restart. The Cup star tried to take the inside line on a restart and his tires got stuck in the grass, causing his car to spin into Chase Briscoe.

SADLER’S STREAK: Points leader Elliott Sadler has been incredibly consistent this season on the Xfinity Series with nine top-fives and 10 top-10s, including a runner-up finish at Dover. He finished fifth.

Sadler had a rough day with the cooling system in his car not working, causing him to overheat. During the rain delay he went to his hauler and received oxygen and fluids.

LABBE TAKEN TO HOSPITAL: Alex Labbe, the driver of the No. 36 Chevrolet, was taken to the hospital late in the race. He was not involved in a wreck. NASCAR did not immediately have an update.

LATE CRASH: Justin Allgaier was running in the top five after the rain delay when his car got away from him and headed to the top of the track, taking out Jamie McMurray and Daniel Hemric. Hemric had the least damage and was able to remain on the track.

Tony Eury Jr., the famous NASCAR crew chief, has turned owner and in doing so enlisted Grala to drive the No. 61 Fury Race Cars Ford Mustang for the next four races. Tony Eury Jr. and father Tony Eury Sr. worked as crew chiefs at Dale Earnhardt Inc. in the Cup Series and JR Motorsports in the Xfinity Series.