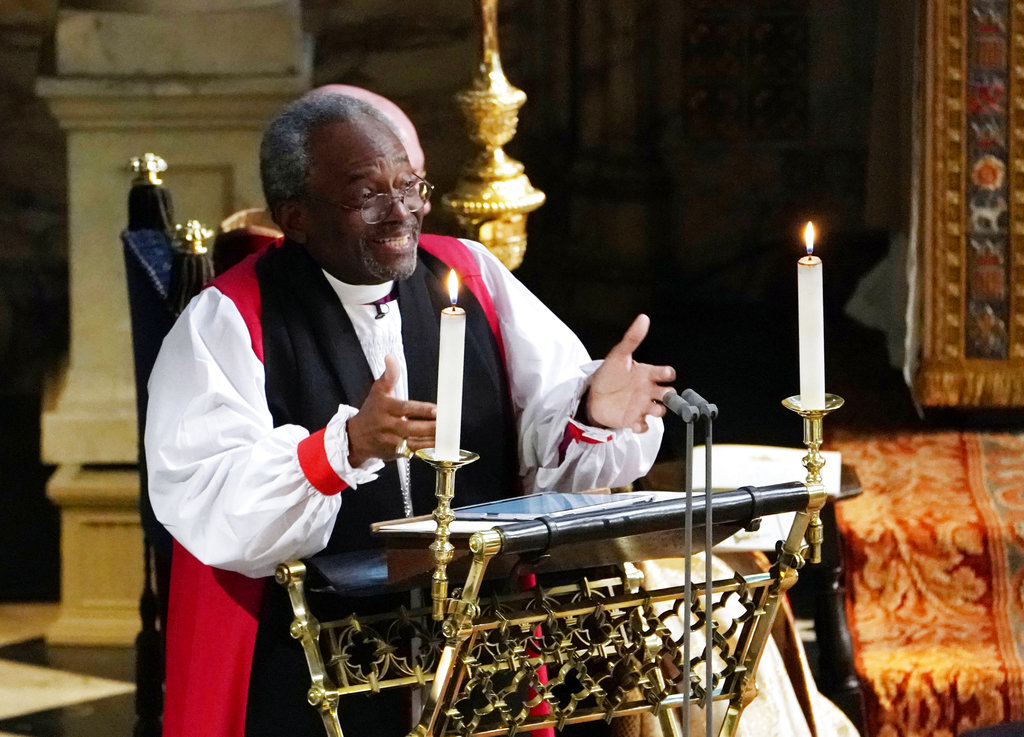 The Most Rev Bishop Michael Curry speaks during the wedding ceremony of Prince Harry and Meghan Markle at St. George's Chapel in Windsor Castle in Windsor, near London, England, Saturday, May 19, 2018. (Owen Humphreys/pool photo via AP)

1. As Salisbury City Council looks at a budget for 2018-2019, how many new officers has Police Chief Jerry Stokes requested?

2. At 6 p.m. June 4, the Rowan County Board of Commissioners will hold a public hearing on a proposed 2018-19 budget that would do what to the county’s current property tax rate of 66.25 cents per $100 valuation?

A. Keep it at the same rate

3. The previously undefeated season of the Salisbury High School women’s soccer team ended last Tuesday, as it finished the year 25-1. What school beat Salisbury in the 2A state playoff match?

4. What business is going to replace the closed Firewater Restaurant and Lounge in the Avalon Plaza Shopping Center in Salisbury?

A. A new CVS Pharmacy

B. A Domino’s Pizza

5. Why was a big crowd at the Salisbury Biscuitville at 515 Jake Alexander Blvd. last Tuesday?

A. The restaurant sponsored a tug-o-war between the Salisbury City Council and the Rowan County Board of Commissioners to raise money for Rowan Helping Ministries

B. Biscuitville gave away free food for an hour to encourage people to see its renovated space and a new “Fresh Southern” branding

C. Half of all receipts that day went to support Relay for Life

D. The company was celebrating its 50th anniversary in North Carolina with big prize giveaways at all of its locations

6. Sweet Meadow Cafe, an eating establishment in downtown Salisbury, has moved from North Main Street and reopened where?

A. On Jake Alexander Boulevard

B. On Mahaley Avenue

7. More than 2,000 students in Rowan-Salisbury Schools are being recognized with at-home yard placards that say they are “extraordinary.” Extraordinary what?

C. Contributors to the community

8. Bishop Michael Curry, who gained national attention when he gave the sermon at the royal wedding of Prince Harry and Meghan Markle, is known to many Salisburians through his former role as what?

A. Head of the AME Zion Church in Western North Carolina

B. Bishop of the Episcopal Church’s N.C. Diocese

9. Larry Farmer, director of human resources at Catawba College, is retiring after 20 years. Farmer is a native of what Rowan County town?

Rowan Museum’s ‘A Spring Supper’ will delve into life…