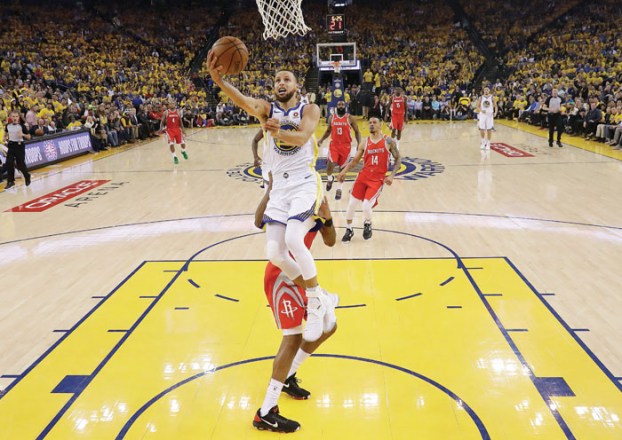 Golden State Warriors guard Stephen Curry shoots against the Houston Rockets during the first half of Game 6 of the NBA basketball Western Conference Finals in Oakland, Calif., Saturday, May 26, 2018. (AP Photo/Marcio Jose Sanchez) 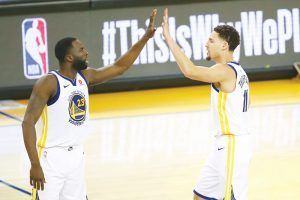 Golden State Warriors forward Draymond Green (23) celebrates with guard Klay Thompson during the second half of Game 6 of the NBA basketball Western Conference Finals against the Houston Rockets in Oakland, Calif., Saturday, May 26, 2018. (AP Photo/Ben Margot)

OAKLAND, Calif. (AP) — Klay Thompson hit nine 3-pointers and scored 35 points, the Warriors held James Harden down in the second half, and Golden State rallied from an early 17-point deficit to stave off elimination with a 115-86 victory over the Houston Rockets on Saturday night to force a deciding Game 7 in the Western Conference finals.

Kevin Durant struggled with his stroke at 6 for 17 but still scored 23 points as the defending champions kept their repeat quest alive by thoroughly outplaying Houston in the second half. The Warriors outscored the Rockets 55-20 in the second half before both coaches subbed their key players with 4:28 left.

A dynamic, star-studded series projected to be as captivating and compelling as the actual NBA Finals is going the distance. Game 7 is Monday night back in Houston.

Golden State stymied Harden on consecutive possessions early in the fourth with smothering defense led by Nick Young and several helpers, then Thompson hit a 3-pointer from the left wing at 9:40 for an 89-77 lead. And roaring Oracle Arena went crazy with hopes of even more home games to come if Golden State can get to a fourth straight finals.

Thompson came through with his best performance of these playoffs with the season on the line, just as he did in a 2016 Game 6 of the Western Conference finals at Oklahoma City when he went off for 41 points against Durant and the Thunder to force Game 7.

“I don’t want to go home,” Thompson said. “We worked too hard this season to go home. And this is what we play for.”

The Warriors used another of their signature third quarters to take an 84-77 advantage going into the final 12 minutes, then maintained that dominant level this time down the stretch, unlike their last home game at roaring Oracle Arena when they blew it in Game 4 on Tuesday.

Both teams let it fly from every corner of the court — Golden State hitting 16 3-pointers and Houston 15.

The Warriors outscored Houston 93-47 over the final three quarters.

Thompson’s baseline 3 in transition with 3:35 left in the third put the Warriors up 76-74, then Curry hit from way back the next time down over Gerald Green. Curry did it again moments later from deep.

The Warriors opened the third with an 11-0 burst to go ahead 62-61 on Curry’s 3 at 9:17, also getting a pair of 3s from Thompson and a dunk by Durant. Houston committed four quick turnovers.

Golden State did it playing again without forward Andre Iguodala, who missed his third straight game of the series with a bone bruise in his left knee sustained in Game 3.

Rockets: The Rockets made 8 of 12 3-pointers in the first and topped the Warriors 19-4 in fast-break points. … Houston committed 11 first-half turnovers, five early. … Harden shot 4 for 12 on 3s.

Warriors: Golden State’s 33-point third quarter was its first 30-point period since the third in Game 4. … The Warriors shot 4 for 18 in the first half from long range. … Golden State is 4-1 when facing elimination dating to the 2015 championship. … The Warriors are 16-8 all-time in Game 6 of postseason series. … Second-year G Patrick McCaw, who had been out since a scary back injury at Sacramento on March 31 when undercut by Vince Carter, received a roaring ovation when he entered the game late. He quickly grabbed a rebound. … Kerr listed Iguodala as day to day because there’s still pain in the knee when running.

Paul is receiving treatment “around the clock,” according to coach Mike D’Antoni.

Having him on hand still meant so much.

“He’s devastated. He has to be. We’re all devastated for him. At the same time, we’ll rally and do what’s right,” D’Antoni said. “He’s so integral in what we do and the spirit of the team. And him being here is a big deal, and him being on the bench is a big deal. He’ll will us through, if he can.”

Warriors coach Steve Kerr felt terribly for Paul — and others who have gone down.

“More than anything, I feel bad for Chris. The guy is a phenomenal player and competitor, and pretty much willed his team the last two games. He’s just been haunted by these types of injuries in his career, and it’s a shame,” Kerr said.

“I hate when anybody gets hurt. I hate when Andre got hurt. I hate to see Kevin Love last night, Kyrie (Irving). These guys train so hard and they’re here and they’re competing, and you want everybody to be healthy, but just the reality is it usually doesn’t work out that way. So you’ve just got to keep playing with whoever’s there and keep going.”