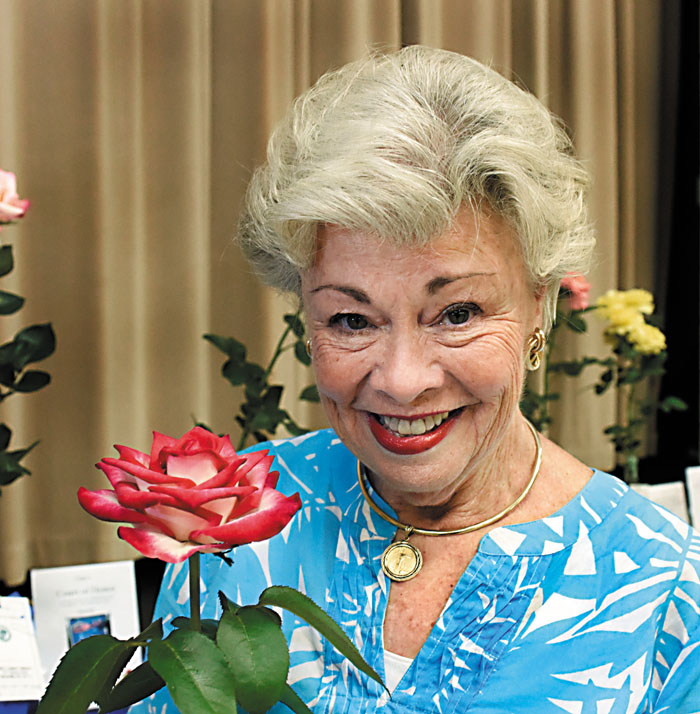 Delores Snellgrove from SC holds her "Queen of the Show" rose. The variety is Dina Gee. photo by Wayne Hinshaw, for the Salisbury Post

“I tell people when I do programs: First, I had children; now, I have roses,” Snellgrove said. “Each one has a different personality.”

One of the 10 blooms Snellgrove entered into the 59th annual Rowan Rose Show won the title of “queen.”

She said its personality was “tall” and “cool.”

“It prefers cool weather to warm weather. It likes the spring bloom better than the fall bloom,” Snellgrove said.

Snellgrove’s winning entry was one of hundreds of entries to this year’s show, according to Rowan Rose Society President Sara Hill and long-time member Clyde Harriss.

Hill and Snellgrove said the decline in exhibitors is, in part, caused by the widespread idea that growing roses is difficult.

“That’s a misconception. They’re not difficult,” Snellgrove said. “In fact, it’s kind of hard to kill one. I mean, it can not look like (these), but until six years ago, I worked more than 40 hours a week and kept the roses going.”

“So it can be done. You can automate your watering and simplify what you do to make it easier,” Snellgrove said.

Snellgrove said raising awareness about the joy of growing roses is one of the reasons she drove two hours from her home in Columbia, South Carolina, to Salisbury.

“If it’s within traveling distance, we try to go to one another’s shows so that the public has the opportunity to see more roses,” Snellgrove said.

Snellgrove’s winning “queen” entry was a Dina Gee variety of the hybrid tea rose — something Hill and Harriss had never seen before.

“So there’s just hundreds of varieties,” Harriss said. “So you’ll think you’ll come to the show and everything will look familiar, but every now and then you find something you’ve never even seen before.”

That was the experience of Alison Walker. She brought her husband, Derek, and daughter, Daisy, to the show Saturday.

“I love roses, so I figured I’d come check (the show) out,” Alison said. “And I didn’t realize there were that many varieties.”

Alison said she loves roses because they seem “perfect” to her.

“So to see people grow them to be as spectacular as they are, it’s amazing,” Alison said.

The rose show lasted from 1 p.m. to 5 p.m. at the Salisbury Civic Center.

Each winner received a 25-pound bag of Mills Magic fertilizer feed, which Hill said is a brand “every rose grower wants.”

Entry to the event was free and exhibitors were able to enter their roses for free.

“It is one of the most eye-pleasing things that you can do on a rainy afternoon or even any other time,” Hill said. “Stop and smell the roses.”