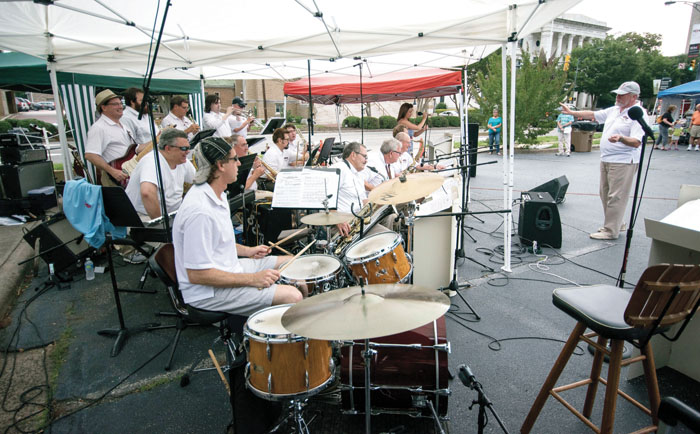 Pointedly, the band’s extensive repertoire ranges from tunes from the roaring ’20s to current hits with everything in between. It’s something for everyone, she says, and she encourages everyone to come verify her claim during this year’s Pops at the Post.

The Salisbury Swing Band, led by Dr. Steve Etters of Catawba College, will perform from 5 to 7 p.m. this Saturday in the parking lot beside the Post.

They’ve served as the pre-show to the Salisbury Post show for years, and former Salisbury Symphony executive director Linda Jones said their performance helps “warm up the crowd.”

The band is comprised of 18 members and, as Millspaugh said, plays music of all genres: from early swing and blues to the popular dance styles of the ’60s, ’70s and ’80s.

Etters serves as professor of music education, and Millspaugh said he brings “a crazy amount of expertise.”

“He’s been doing this for 40-plus years now,” she said. “Catawba’s music program has flourished with him there. … He just makes all of us better musicians.”

Millspaugh said that this year’s Pops set list will include chart-topping hits throughout the decades.

“Even the older songs are things that everybody knows,” he said. “Each and every song is going to be familiar to people. I think they’ll really enjoy it.”

The second half of the group’s set will begin with “God Bless the USA,” where they ask veterans to stand and be recognized.

This and other aspects make the swing band’s yearly participation at Pops one of their favorites, she said.

“I love that it’s here in town,” she said. “… We play in all of the Piedmont area, but being here at home is really nice because we have our biggest crowd of supporters.”

The group so loves the atmosphere at Pops that this year they’ve purchased two tailgating spots, so they can eat out together as the family they are, she said.

“Just being right here with the community I think just makes it exciting and fun,” she said. “It’s always a good atmosphere and a good energy at Pops at the Post.”