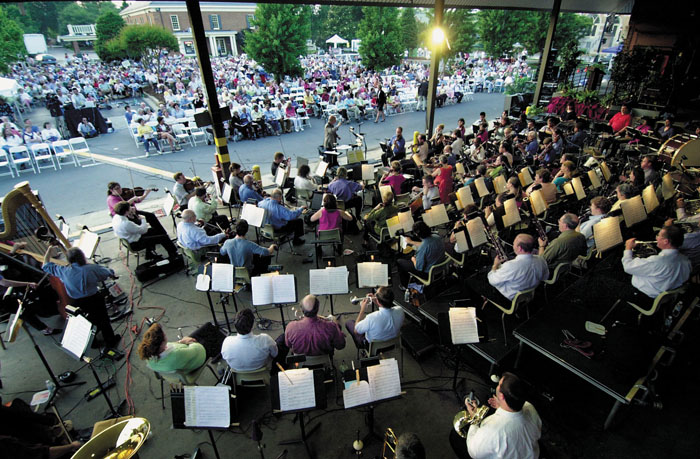 The Salisbury Symphony performs on the Salisbury Post loading dock with hundreds seated on Church Street and surrounding parking lots during the inaugural Pops at the Post in 2005. Photo by Wayne Hinshaw, Salisbury Post

The first concert was in 2005, organized to help the Post celebrate its 100th anniversary. The event was offered as a gift to the community.

Since then, it’s been offered yearly and for free. Recently, the concert has been organized through the Pops at the Post nonprofit, established in 2012 due to the event’s continued success.

As a nonprofit, the Pops at the Post group counts on sponsors and donations to pay for the concert, and an opportunity to contribute will occur during this year’s show.

Volunteers from the Civitan Club of Salisbury will pass around red, white and blue hats during this year’s intermission, a tradition that started in 2013.

It was such a success that the group has continued it in the years since as a service project, said Linda Jones, former executive director of the Salisbury Symphony.

“In the years past, the audiences have been very generous,” said Jones. “It’s really lovely.”

Look for Civitans in branded shirts and with “Uncle Sam” hats during Saturday’s event.

This year’s presenting sponsors include Gerry Hurley, Fred and Alice Stanback and the Salisbury Post. Additional sponsors can be found through the Pops at the Post website, www.popsatthepost.org.

Donate online via the the Pops at the Post Facebook page. Go to www.facebook.com/PopsatthePost and click the blue “donate” button at the top right of the page.