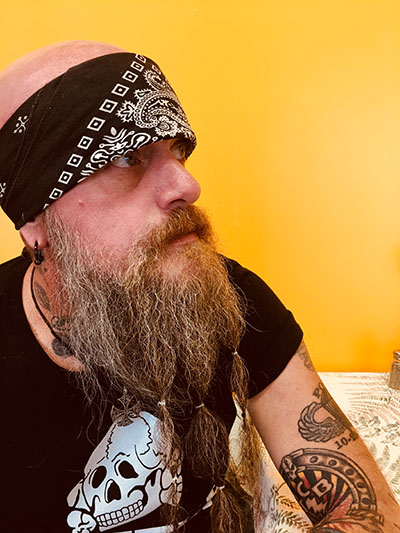 Friends started a Go Fund Me page for "Pirate Scott" — Scott Staley — so he can move to Texas to take care of his mother. Susan Shinn/for the Salisbury Post

SALISBURY — You may not know Pirate Scott’s name, but you’ve likely eaten his food.

Since 2005, Pirate Scott — his real name is Scott Staley — has cooked for Sweet Meadow, La Cava, Uncle Buck’s, Creative Gourmet, Cooper’s, Brick Street and City Tavern, where he wrote the menu. He was going for an upscale, gastro pub-like vibe, and, judging from the restaurant’s success, he achieved it.

But Sweet Meadow, he says, “has been my home for a long time.”

Scott received training at Johnson and Wales after serving in the Navy from 1991 to 1997.

“I’ve always cooked, but then I got a piece of paper saying so,” he says.

“He is one of the most creative people I have ever worked with,” says Heather Teeter, who co-owns Sweet Meadow with her husband, Scott. “He has been my favorite chef of all-time. He has an incredible palate. Any kind of cuisine, he does it all, and he’s an incredible baker.”

She gave Pirate Scott his nickname to differentiate between the two.

“I mean, look at him!” she says, gesturing to his long beard, tattoos, and bandanna. Yet she loves the fact that even though he may look menacing, he makes a mean blueberry tart with lemon curd.

But Scott — who turns 50 at the end of the month — has had to step away from cooking because of significant nerve damage caused in service, along with PTSD.

“It’s progressing,” Heather says. “He can no longer control his extremities the way he used to. But his mind is still there, and he’s still a creative genius.”

He’s been a tattoo artist, and paints and draws in a variety of mediums.

“You’ve got to have an outlet to express yourself,” Scott explains.

“He can also sing and play the bass,” Heather adds.

Scott recently has been traveling back and forth via bus to El Paso, Texas, where his 80-year-old mother, Ruthie, lives. He needs to move back to help take care of her. Since he’s no longer working — he’s waiting to hear about disability benefits — finances are tight.

“It’s so far away,” he says. He’s whittled down his belongings as much as possible, but it’s still going to cost about $3,800 to ship his stuff.

“It’s ridiculous, to be honest with you,” he admits.

But two friends, Candy Parker Watson and Mike-O Martelli, have collaborated on a Go Fund Me page for Scott.

“I don’t take help well,” he admits, although his friends say he freely helps others.

“This is an incredibly giving town,” Heather says.

She knows that firsthand.

Two years ago, Heather and her husband hosted a raffle for an employee who needed extensive time off to recover from surgery. More than four dozen local businesses helped. And the town responded again when the Teeters moved Sweet Meadow to its new location at 105 E. Fisher St.

Mike-O and Candy set up Scott’s Go Fund Me Page on Tuesday.

Mike-O and Scott had met in passing, but got to know each other when they both cooked at Cooper’s.

Mike-O says the fundraiser is just over halfway toward its modest goal of $2,500.

“It’s been great to see all of the support,” he says.

Scott may be a man of few words, but he does have this to say: “Thanks from the bottom of my heart.”