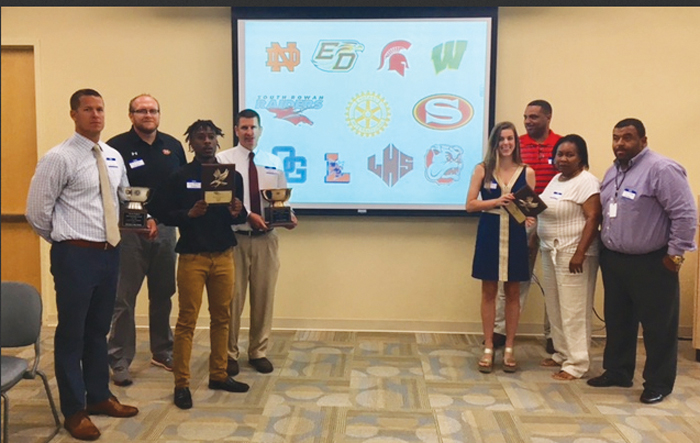 Price of Freedom Museum D-Day Remembrance
The Price of Freedom Museum at 2420 Weaver Road, China Grove, will be hosting a D-Day Remembrance on June 2 from 9 a.m. to 3 p.m. with the opening ceremony at 10 a.m. Military vehicles, weapons, and memorabilia will be on display with all exhibits open including a replica WWII era 3-room house. This event honors all veterans with all branches of the military represented. Food will be available. No admission charge but donations are accepted. There will also be a Bluegrass Mini-Fest hosted by the North Carolina Bluegrass Association and Strings of Victory, featuring Strings of Victory at 10:30 a.m., Goldline at 11 a.m., and Grass Strings at 12 p.m.

The Rowan Redbuds Garden Club met Thursday, May 24, in the Stanback Room at Rowan Public Library.  President Carolyn Alexander presided.  If you are interested in visiting the club, call 704-637-0928 for more information.

THOMASVILLE — The Thomasville and Lexington Rotary Clubs presented the annual Central Carolina Athletic Awards to regional athletes on May 23. The purpose of the luncheon was to honor athletes and athletic programs from the Central Carolina Conference that have excelled during the 2017-2018 school year. The 2-A conference includes: Central Davidson, East Davidson, Ledford, Lexington, North Davidson, Oak Grove, Salisbury, South Rowan, Thomasville and West Davidson high schools.

Also presented were the Charles England Sportsmanship Award, which recognizes the high school that exemplifies sportsmanship; and the George Cushwa Cup for Excellence in Athletics, which is awarded to the school with the most successful all-around program. The England Sportsmanship Award honors longtime Lexington Senior High School coach and educator Charles England and the Cushwa Cup is named in honor of George Cushwa, who served as football coach and athletic director from 1959-1983 at Thomasville High School. Both England and Cushwa had great influence on their communities in numerous ways beyond athletics.

The 2017-2018 Charles England Sportsmanship Award was presented to Oak Grove High School. The award was accepted by Athletic Director, Stan Smith, who expressed gratitude for the recognition in the inaugural year for the high school and extended thanks to the coaches at Oak Grove and within the conference for a their sportsmanship throughout the season.

The presentation of the George Cushwa Cup was made by Rotarian, Stan Styers. The 2017-2018 Cushwa Cup award was given to Ledford High School. Ledford finished first or second in 14 out of 19 sports in the 2017-18 school year. Athletic Director, Donald Palmer, accepted the award and expressed his gratitude for the conference which he feels encourages athletes to strive to be like Coaches Cushwa and England, who embodied hard work, passion and strong character.

Lexington Rotarian Stan Styers shared that the Rotary Clubs in Davidson County and the Doak Finch Foundation are proud to partner annually to bring conference schools together to celebrate athletic achievements and our community.

Entrepreneurial Marketing Workshop, June 6 at 6:30 PM at the Rowan IDEA Center in the West End Plaza – Topics will include Importance of Scale, How to Scale, Pivots: What, When, and How, Building a Team, Ownership and Equity Issues and the Value of an Advisory Board. A great workshop for any business owner! Free to attend. RSVP on Eventbrite or Facebook.