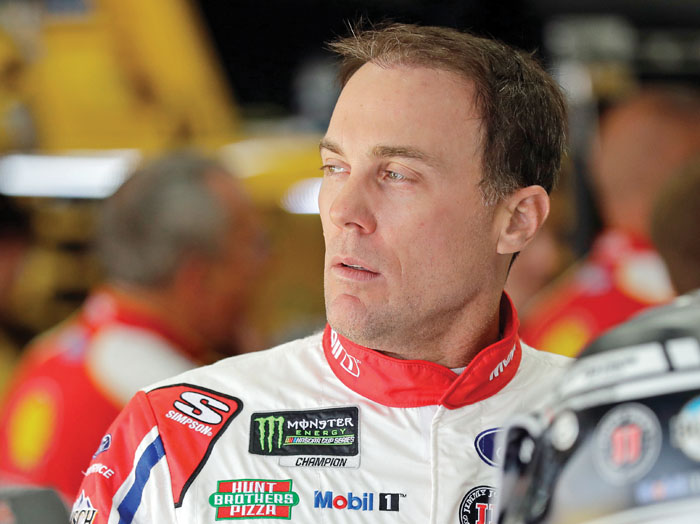 CONCORD (AP) — Kevin Harvick is well aware he’s in the midst of something special.

Harvick has won the last three Cup races, including the $1 million All-Star race at Charlotte Motor Speedway last weekend. And while he is starting 39th for the Coca-Cola 600 after his No. 4 Ford failed inspection three times prior to qualifying, he’s expected to be in the mix at the end.

“When you are on a hot streak, you are so confident not only as a driver but as a team,” said Joey Logano “It’s like you can’t do anything wrong. You just happen to be in the right spot at the right times. Their cars are really fast, they are really smart and they are really good. And Kevin is a great driver. … When you’re good, you’re good. He’s confident.”

Harvick’s failure to participate in qualifying wasn’t lost on his competitors, who are looking for any advantage possible in their attempts to reel him in. Logano joked that “it sure don’t hurt” that Harvick has to start at the back of the field.

But with this being 100 miles longer than any other race on the NASCAR circuit, Harvick has plenty of time to push to the front.

Harvick said his team knows things are going well, but they are staying focused and handling success in stride.

“You can feel that within the organization that what you could achieve by the time you roll through Homestead at the end of the year,” Harvick said. “It’s something you might not ever get to do again, so I don’t believe that those conversations will have to happen.  Our goal is to playoff race every week and I think as we’re doing that right now as an organization. That’s still the goal going forward.”

Harvick is looking to become the sixth driver to win the All-Star race and then follow with a win in the 600.

Things to watch in Sunday’s race:

DIFFERENT SETUP: Drivers say to discount everything you learned from the All-Star race, as this will be a completely different setup than the exhibition event that had restrictor plates.

Harvick said he doesn’t think there’s anything he can take away from his All-Star victory except for confidence.

“I don’t think there was really anything similar about the way that the cars were built.  The engine … nothing,” Harvick said. “There’s nothing that you can take from last week to this week other than just momentum and just the positive things that happened.”

TRUEX’S TRACK: Martin Truex Jr. has clearly figured out CMS and his No. 78 Toyota is expected to be strong on the long runs Sunday.

He has two wins in the last four races at the track, and top-5 finishes in five of the last six races. In 2016, he made history by leading 392 of the 400 laps — the most ever in a Cup race — to capture the checkered flag.

BUSCH ON THE POLE: Kyle Busch still leads the point standings despite Harvick’s amazing roll of wins and will start on the pole.

Charlotte is the only track on the Cup schedule where he has never won a points-paying race. He did win the All-Star race here in 2017.  Busch’s driving rating of 104.9 is second only to the track’s all-time winningest driver, Jimmie Johnson.

LIKE A TRIATHLON: The 600 is the most grueling race on the NASCAR circuit and is considered the toughest test of man and machine. Johnson, racing in his 18th season in the Cup series, called it a “very long, difficult race.”

“I consume electrolytes, carbs, anything that keeps me alert over the course of the race,” Johnson said. “It’s definitely a big day at the office.”

JONESING TO RUN FAST: Keep an eye on Erik Jones, who was fastest in the final round of practice and will start in the top five. Jones has five top 10s in 12 races, but he has never won a points-paying race.