For Hervieux family, patriotism is a family commitment 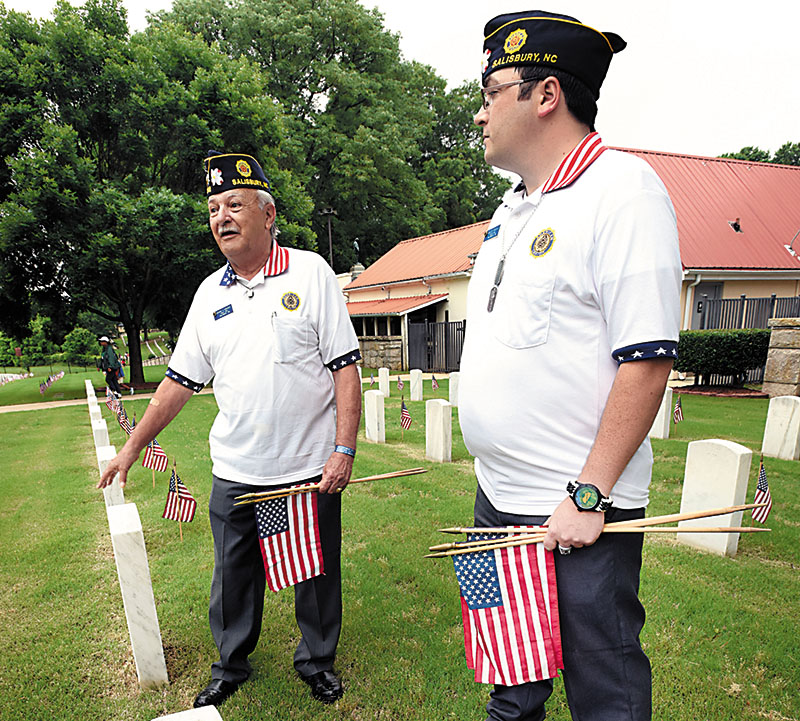 Gerard R. Hervieux and son, Gregory Hervieux are from Harold B. Jarrett Legion Post 342. Scouts and other volunteers placed flags on the graves at the National Cemetery. photo by Wayne Hinshaw, for the Salisbury Post

SALISBURY — “Do you see that there?” asked family patriarch Gerard Hervieux. “That is the first Women’s Auxiliary junior member.”

Gerard was pointing toward his six-year-old granddaughter, Alice Marie, who was working with her grandmother, Judy, to place flags on veterans’ graves at the Salisbury National Cemetery Saturday.

“She’s been doing this just as long as we have,” said Gregory, Gerard’s son. “Every time we come out here to do the flags, she’s out here doing it right with us.”

Placing flags on veterans’ graves the weekend before Memorial Day is a long-standing Salisbury tradition, according to Retired Master Sgt. Dean Moore, president of the Rowan County Veterans Council.

And Gerard said that, after two years of doing it as a family, his and Gregory’s American Legion Post —342 — gave Alice a uniform to wear during it.

“That’s a full-dress uniform. Oh, she loves it,” Gerard said. “The only thing is we have to put Navy on it because that’s an Army uniform.”

Gerard and Gregory are both Navy men, having served during two major wars.

Gerard said his father also served in the Navy.

“So you know, you tell everybody at the Legion we’re three generations, and they all look at you and go, ‘What?’” Gerard said. “And I say, ‘Oh yeah, my father in World War II and Korea, me with Vietnam and (Gregory) with the Gulf War.’ We served all the wars.”

Judy said she hadn’t yet met Gerard when he was serving in Vietnam. But she does remember what it was like when Gregory decided to enlist.

“He was 18. He had just graduated,” Judy said. “So it was an experience for me as a mother because I was miserable the first six months he was gone. Because, you know, you didn’t know where he was, what he was doing.”

Judy said that, although she and Gerard are both patriotic, they never pushed their son to join the armed forces.

Gregory served from 2003 to 2008 and was deployed to help with the aftermath of Hurricane Katrina and the 2006 Lebanon War.

“We went in there and we rescued about 30,000 Americans from Lebanon during the civil war they were having there,” Gregory said.

Now retired from service, Gregory and Gerard both serve in the Honor Guard and help with ceremonies for veterans’ funerals.

“And every time we shoot that rifle, I always have a tear coming out of my eye because I’m thinking of that man,” Gerard said. “He may not have died in the war…but he’s still a veteran. He gave that sacrifice of serving. And you don’t forget these people. That’s why we put flags on these graves.”

Gerard said the feeling of placing flags on the graves with wife, son and granddaughter is “the best feeling in the world.”

“I almost died three times. I’ve had three heart attacks. And I won’t give up doing this until the day I’m dead, until I die,” Gerard said.

Gerard said he enjoys teaching Alice and other young people about the value of serving.

“These are the men that gave their lives for this country so we would have freedom. And that has to be taught to these kids. That freedom isn’t free. That someone paid an ultimate sacrifice,” Gerard said.

Alice said she enjoys placing flags on graves because it makes her feel “helpful.”

When asked if she knew what the armed forces do for the country, Alice shook her head.

But her grandmother helped her out.

“To keep you safe,” Judy said.

Gregory is a single parent, and Judy said she’s proud of the way he’s raising Alice.

“He’s doing a good job instilling the patriotism,” Judy said. “And not only that but respect. That’s my concern.”

Gregory and Gerard will perform with the Honor Guard at the Memorial Day ceremony at the Salisbury VA Medical Center National Cemetery Monday at 10 a.m.