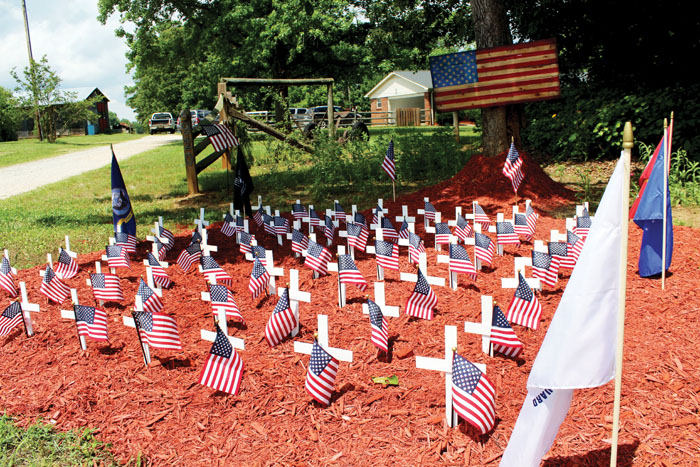 Doug and Vickie Raymer have crafted a 10-by-10-foot miniature homage to national cemeteries and the Normandy American Cemetery Memorial in France. The display contains 64 miniature white crosses, made out of paint sticks. Photo by Andie Foley, Salisbury Post.

CHINA GROVE — Ride along Weaver Road in China Grove this Memorial Day weekend and you’ll find a unique display thanks to Doug and Vickie Raymer.

In a roughly 10-by-10 foot patch of mulch, the pair have created a miniature homage to national cemeteries and the Normandy American Cemetery Memorial in France. Specifically, they’ve crafted 64 miniature white crosses, and each is on display in pristine, measured rows.

“I told Doug that I’d like to do that for Memorial Day, for the veterans,” Vickie said.

Doug, a veteran of the Air Force who served during Vietnam, was quick to agree.

“Memorial Day is for the ones that didn’t come back,” he said. “They deserve that. Not us that did, those that didn’t.”

Vickie said the display came together bit by bit. The crosses were constructed out of paint sticks. They were set over red mulch to “make it stand out,” she said.

Each cross is joined by an American flag, and the display is bordered by flag representing different branches of service and prisoners of war.

And the miniature memorial is set in front of a custom painted pallet, yet another United States flag. The family reports this was a gift from family friend Tony Kioukis, who operates Tony’s Pallet Design out of Kannapolis.

Kioukis offers many handcrafted tributes in honor and memory of service men and women, from local public safety to members of the military.

“We just decided to do it and added one thing after another, just little by little,” said Vickie. “We worked for a good while and we really worked hard. Hands and knees, you know.”

For their first year assembling the Memorial Day tribute, the Raymers say the project was relatively hiccup free.

The hardest part? Amassing all the necessary paint sticks, said Vickie. The project required over 80.

“Lowe’s was really good to us,” she said.

Vickie also originally found all service branch flags but one: the Marine Corps. She found the missing link on a trip to purchase the second batch of sticks.

The pair said they were hoping to get the display as close to a national cemetery as they could, with the view from every angle looking the same.

They got it as close at they could given uneven ground and an abundance of rocks, she said.

“We got it as close as we could,” said Doug. “… The reason we put it up is because we were hoping people would see it and think.”