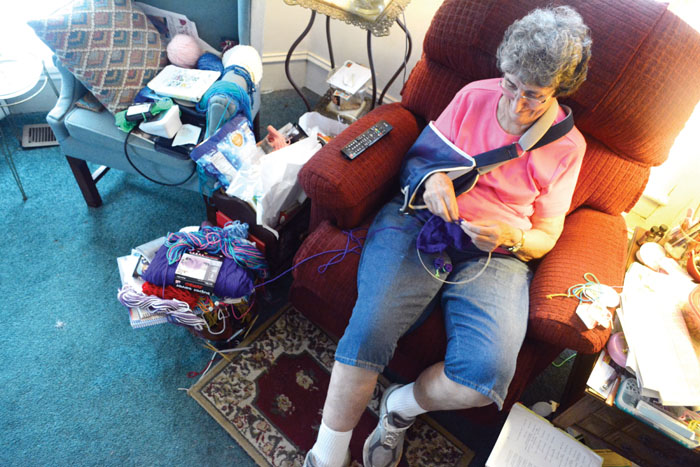 From her recliner in the den, Myrtle Lentz keeps all of her knitting supplies at the ready. Photo by Susan Shinn Turner, for the Salisbury Post.

CHINA GROVE — You might have heard that bit of scripture from Proverbs: “Idle hands are the devil’s workshop.”

Myrtle Lentz absolutely believes it. That’s why, more often than not, her hands are flying with knitting needles. She knits prayer shawls for members of her church, and caps for a mission project in West Virginia led by Chip Cook.

All year long, she knits toboggans for Cook’s trip in December, and she’s almost filled a large plastic bin. She tries to keep a few prayer shawls ready, just in case, she says.

But her big project throughout the year is making teddy bears for Victory Junction. During the summer, the Randleman camp serves up to 125 campers each week who have serious medical conditions or chronic illnesses. Each child leaves with a black-and-white checked bear and a blanket.

And if you multiply 125 campers a week for nine weeks of summer — well, that’s a lotta bears and blankets. Plus, family weekends take place in spring and fall, so the need is year-round.

And truth to tell, the bears are a bit more time consuming to make than the blankets, according to Shannon Craver, sewing program coordinator.

In 2017, Shannon says, Victory Junction received 1,676 bears, with 944 of those bears coming from North Carolina. And 111 of THOSE bears came from Myrtle.

“So 111 bears is pretty significant for one person,” Shannon says. “The folks who sew seem to do it from their hearts. Using their time and talents, they enable us to give each camper a part of Victory Junction to take home with them. To take that amount of time and effort is really meaningful. It’s always fun to see how people use creativity with bears and design their patterns. When they come in they’re all so cute.”

That’s definitely the case with Myrtle’s bears. Per the request of camp, she uses the checkered flag pattern. Lately, it’s been hard to find, but she recently bought two bolts at Anderson’s Sew & So in Rockwell.

When she cuts out the 21-piece pattern, Myrtle adds a bright touch of color. One bear might sport a red face, another a pink ear, still another an orange arm.

“I try to vary it because I’d get bored doing the same one over and over,” she says.

The ladies from her circle help stuff them, and Norma Patterson, the church’s secretary, ties a bow around each bear’s neck. All told, Myrtle has made 511 bears — or maybe even a few more, she says.

She’s been a member of Lutheran Chapel since 1939, the year she was born. She moved to Virginia to work as a health and PE teacher. She returned to her family home place in 1999 and subbed until last year. The technology just got to be too much for her, she admits.

Before she got into making the bears, she crafted beautiful stained-glass lampshades and sun catchers.

“But after awhile, what do you do with it?” she says. “I don’t want anything else to sit around.”

Keeping her company while she works are her two rescue dogs, Boots, 4, and Lucy, 6 months.

“She’s a character,” Myrtle says of Lucy. She was at the pound hunting a dog the day Lucy happened to come in. She wanted a small to medium dog.

“I believe she’ll do,” Myrtle thought.

She also wanted a small to medium dog when she got Boots. That skittish but sweet girl now weighs about 60 pounds.

“I do not consider that medium,” Myrtle quips.

Myrtle lives on land that’s been in her family since 1908. Her brother, Tom, lives nearby, while her sister Loretta Bragg lives in Raleigh. The sisters travel together often. They had a trip planned recently, but Myrtle fell at the concession stand last month when she was working an auction, and ended up cracking two ribs, her right shoulder and collarbone.

That hasn’t stopped her from knitting, or delivering Meals on Wheels. She drives, she says, real carefully.

“Everybody needs to do Meals on Wheels,” she says. “It is an eye-opener when you run into people who have so much less than what you’ve got. People I’ve worked with have been very appreciative.”

She participates with other church members, she says. “It’s rewarding, like a lot of other things.”

Besides being in circle, she’s a member of the choir and fixes flowers for Sunday services. She teaches Sunday School, and visits homebound members. And she’s in charge of the concession stand at auctions.

“I have a lot of great help,” Myrtle says.

“One of her special ministries which brings joy and comfort to others is her participation in crocheting prayer shawls for folks who are ill or otherwise in need of feeling, in a tangible way, God’s presence during challenging times,” says her pastor, the Rev. Susan Bame. “I’m amazed at her flexibility in all she does. Her ministry, I have observed, comes from her faith, compassion for others, and her sense of humor. I consider her one of many teachers I’m blessed with at Lutheran Chapel. I’m taught daily by Myrtle and many like her how it is to love and serve with abandon. She is a wonderful ambassador for her faith, her town of China Grove, and her church at Lutheran Chapel.”

When Myrtle is knitting or sewing, she thinks about the fact that “there will be one more little warm head in West Virginia, or one more kid getting joy from a teddy bear at Victory Junction.”

And that is a very good way indeed to keep those dear hands busy.