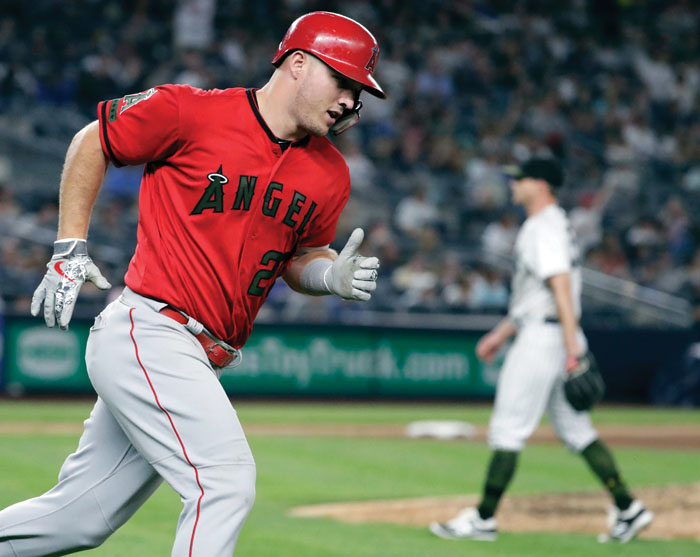 Trout added an infield single and finished 5 for 5, including a two-run homer off shaky starter Sonny Gray (3-4) in the fourth that put the Angels ahead 5-4 after they trailed by three following the second inning.

Brett Gardner and Aaron Judge began the bottom of the first with back-to-back homers for the Yankees, who lost for only the third time in their last 17 home games. Austin Romine poked a two-run shot the other way off the right-field foul pole that made it 4-1 in the second.

Barria settled down after that and lasted five innings. He gave up six hits and struck out four before the Los Angeles bullpen delivered four scoreless innings of one-hit ball.

Coming off his best outing of the season, eight dominant innings at Kansas City, the inconsistent Gray took a step back. He was charged with five runs, seven hits and three walks in 3 2/3 innings.

Trout hit an RBI double off the left-field wall in the first and a ringing double to right in the third. After his homer in the fourth, he had an RBI double to left-center in the sixth and an infield single to deep shortstop in the seventh.

Albert Pujols had a two-run single as the Angels broke it open in a four-run sixth.

Shohei Ohtani threw a bullpen before the game and then went 0 for 4 with two strikeouts and a bases-loaded walk as the designated hitter. Ohtani also grounded into a double play that scored a run. He initially was lined up to pitch Sunday against Japanese countryman Masahiro Tanaka, but the two-way rookie sensation was pushed back by the Angels to manage his workload. Ohtani would seem likely to be the DH against Tanaka on Sunday, though skipper Mike Scioscia wouldn’t commit to that. Ohtani appears to be tracking toward making his next start on the mound Wednesday in Detroit, but the team has not made any announcement.

Called up Sunday from Triple-A Salt Lake, Briceno enjoyed quite a major league debut — at Yankee Stadium, no less — after eight-plus seasons in the minors. With his parents on hand from all the way back home in Venezuela, the 25-year-old backup catcher started and lined a fourth-inning single for his first career hit. He was thrown out stretching on the play as he tumbled into second base with an awkward rolling slide. But he walked and scored in the sixth before hitting a two-run homer off Chasen Shreve in the seventh.

The AL East-leading Red Sox celebrated the return of Dustin Pedroia with their sixth win in seven games. Mitch Moreland had a key two-run double, Steven Wright (1-0) pitched three scoreless innings, and Craig Kimbrel got three outs for his 16th save.

The 34-year-old Pedroia went 0 for 4 with a walk and scored in his first game after offseason knee surgery.

Dansby Swanson hit a two-run homer for Atlanta, and Ronald Acuna Jr. connected for a solo shot. Sean Newcomb, a Massachusetts native, struggled with his control in his first career game at Fenway Park, giving up three runs and walking four in three innings. Sam Freeman (1-2) got the loss.

PHILADELPHIA (AP) — Aaron Nola took a no-hitter into the seventh inning, Nick Williams hit his third pinch-hit homer in the eighth and the Phillies moved into first in the NL East.

Nola did not allow a hit until Russell Martin’s tying RBI single with two out in the seventh. He struck out 10 and walked three while throwing 113 pitches, matching a career high.

Seranthony Dominguez (1-0) allowed one hit in 1 1/3 innings for his first major league win. Luis Garcia worked the ninth for his first save.

Williams led off the eighth with a drive to center off Joe Biagini (0-4). Williams leads the majors in pinch-hit RBIs (eight) and total bases (19).

Matt Olson, Matt Joyce and Chad Pinder connected for the Athletics, who began the day ranked last in the majors with 15 home runs at home and tops in baseball with 47 on the road.

The Diamondbacks wasted a solid outing for Clay Buchholz in their 15th loss in 17 games. Buchholz (0-1) permitted one run and two hits in six innings.

Choo’s 176th career homer moved him past Hideki Matsui for the most by an Asian player.

Choo hit a 3-1 pitch from Kevin McCarthy (3-2) for his eighth homer this year. It was his third career game-ending homer and first in five seasons with the Rangers.

Christian Yelich had three hits, drove in three runs and scored three times for the NL Central-leading Brewers, who have won eight of their last 10.

Kratz, acquired Friday from the Yankees, homered with two outs in the fifth against A.J. Ramos, who came unraveled during what had been a close game.

MIAMI (AP) — Mark Reynolds hit a tiebreaking homer leading off the ninth inning, and the Nationals rallied to beat the Marlins for the 10th consecutive time.

Miami’s Wei-Yin Chen took a two-hit shutout into the eighth but gave up a one-out homer to Wilmer Difo, who pulled a pitch off the foul pole to make the score 1-all.

Reynolds connected against Brad Ziegler (0-4) for his fifth homer in 27 at-bats since being called up from the minors. Pinch-hitter Matt Adams and Trea Turner each added an RBI single.

Flaherty (2-1) gave up Starling Marte’s long home run in the first but settled down quickly. The rookie allowed four hits, struck out four and walked two.

Bud Norris worked a perfect ninth for his 10th save.

Chris Stratton (6-3) shook off a shaky start and lasted five innings for his third straight victory. Hunter Strickland pitched a perfect ninth for his 10th save.

With the Rays thin in the rotation, Banda (1-0) entered with two outs in the second. He wound up allowing one run and three hits while striking out seven over 6 1/3 innings. Roe worked a perfect ninth.

Sergio Romo will make his second start in three days in Sunday’s series finale when the Rays complete a stretch of three consecutive days of having relievers starting games.

Baltimore’s Andrew Cashner (2-6) was tagged for five runs and 11 hits in five-plus innings.

DETROIT (AP) — Tim Anderson homered twice on his way to a career-high four RBIs, leading Hector Santiago and the White Sox to the victory.

Anderson and Jose Abreu each hit a solo drive in the fifth, tying it at 3. Daniel Palka led off the sixth with a tiebreaking shot off Francisco Liriano (3-2), and Anderson’s three-run homer against Louis Coleman made it 7-3 White Sox.

Santiago (1-2) allowed three runs, two earned, and seven hits in five innings in his first win since May 9, 2017, for Minnesota against the White Sox.

Jeimer Candelario homered twice for Detroit and drove in three runs. Liriano struck out eight in five-plus innings, but was charged with five runs and six hits.

Up-and-comers will try to announce arrival as French Open…