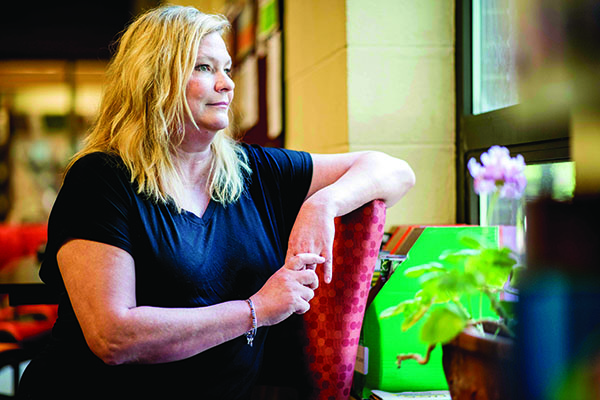 Andrea Stallings suffered with a puzzling illness for several years that made her leave her nursing job for a employment that allowed her to work from home. Eventually Stallings was determined to have contracted Lyme disease which is a bacteria that is transmitted by ticks. Tuesday, May 22, 2018, in Salisbury, N.C. JON C. LAKEY / SALISBURY POST

SALISBURY — Andrea Stallings is a runner. Today she can’t wake up, throw her hair into a ponytail and run 3 miles like she used to.

She has Lyme disease.

May is Lyme Disease Awareness Month and we spoke with Andrea, who’s a nurse, about her journey to diagnosis and treatment.

“I visited my family doctor because I was experiencing heart palpitations and my blood pressure was 2xx over 1xx. I was exhausted. I’d take a nap every day on lunch break, and had frequent, unexplained fevers and chills.

“He tested me for Hashimoto’s Disease. I was positive.”

According to the Mayo Clinic, Hashimoto’s disease is a condition in which one’s immune system attacks the thyroid, a small gland at the base of the neck below the Adam’s apple.

Andrea discussed her symptoms with her co-workers at the hospital. Many of them shared their positive experience with an integrative medical group in a nearby city.

Andrea decided to see what they could do for her.

“At this point I was experiencing soaking night sweats, hand tremors and failure to find common words that I know. I’m a nurse. I know lots of big Latin words. Especially when I’m on the phone with patients about their health, I need the words to help them.”

Her integrative doctor said her symptoms suggested Lyme disease. She took a written test of symptoms and scored a five, the highest indicator, on all questions. The doctor ordered comprehensive Lyme testing and she was positive in three bands. She had three strains of Lyme Disease.

Lyme disease is typically borne by ticks that bite humans. Bacteria enter the body and invade the system. Spirochetes (SPY-roe-keets) are shaped like corkscrews and bore into cells throughout the human body. They even invade the mitochondria, the most essential cell in muscles.

The most common and unique symptom for Lyme disease is a “target rash.” It’s a red, round rash surround by a ring of the same rash. It can occur anywhere on the body. Not all Lyme victims have the rash, but people who have the rash likely have Lyme.

“Until this point, I felt bad every day. I just had no energy. I had terrible headaches. I began to question, ‘Am I becoming a hypochondriac?’ I had switched to working at home and was sleeping until 8:25 to start work at 8:30. I’d nap at lunch and go to bed at 5:00.”

There is more than one way to treat Lyme disease. Traditional doctors typically prescribe a heavy dose of antibiotic – usually doxycycline — for 30 days.

Newer treatments show positive results using “pulsing,” or administering antibiotics for a few weeks on, then a few weeks off, continuing for six to 24 months.

“When I was diagnosed, I took a five-week sabbatical for treatment. I was on five different antibiotics and 36 supplements. I took antibiotics for three weeks, then off for two weeks. Three weeks on, then off, and repeat for 24 months. The final two weeks I will take one antibiotic.”

Within two weeks she began to feel better. Now she has more good days than bad days.

One thing to worry about with antibiotics is gut health. Andrea also takes lots of probiotics to reintroduce healthy bacteria into her gut.

As the spirochetes die in her body, they put off endotoxins in the body. It’s important that she get those toxins out of her system. She approaches this challenge in several ways, including bathing with Epsom salts, drinking lots of water with lemon, and using essential oils.

She’s given up soda, mostly, and joined SoFul, the local yoga studio. It’s, in her words, a full-life change.

Her diet has changed as well. She’s now gluten-free, dairy-free, sugar-free, and grain-free.

Lyme is sometimes called, “The Rich Man’s Disease” as many insurance companies don’t recognize it, or don’t pay for integrative treatments. In addition to the intermittent antibiotics, Andrea’s 36 supplements a day can be pricey.

Andrea was just diagnosed in March of this year. In the span of two months, her whole life has been turned upside down.

“At first I was really angry. My husband and I have all our kids out of the house — well, almost — and we want to do things. We’ve been to rainforests, slid down waterfalls. We want to visit Ireland. He can retire in a few years. I felt this was taking my life away from me.

“Brian is the most wonderful husband in the world. He has a very difficult job but when he gets home, the first thing he asks is, ‘How are you? How do you feel? Can I get you something to eat?’ He doesn’t say it, but I know he is frustrated that he can’t fix this for me.

“Now I know it’s just my path, so I may as well embrace it and learn to live with it. As a nurse, my role is to be a teacher. So I will spread the word and be an advocate.”

Andrea and her sister Alison got identical tattoos of the path of life. The path of life illustrates twists and turns and illustrates one’s own willingness to celebrate life’s moments — even those that don’t follow a straight line from A to B.

“I got it before I knew I had Lyme but, when I was diagnosed, I knew that it would always be a reminder to always live my best life, to stay positive and be accepting of my circumstances.”

Only two months after diagnosis, Andrea’s life has drastically improved. Her hair and skin glow. Her thyroid numbers are back to normal; at one point her general practitioner had said her thyroid was almost dead. Her blood pressure and heart rate are back to normal. Her hands no longer tremble.

Her integrative doctors quote a 70 percent success rate in their treatment of Lyme Disease. What defines success with a chronic disease? It’s a treatment that causes the disease to go into remission with significant reduction — or absence — of symptoms. This gives Andrea hope.

“Integrative was the way to go for me. I can make this experience fruitful by spreading awareness and trying to help other people.”

If you have Lyme disease, talking to others may help. The local Lyme Disease support group meets at St. John’s Lutheran Church the first Sunday of every month from 3 to 6 p.m.