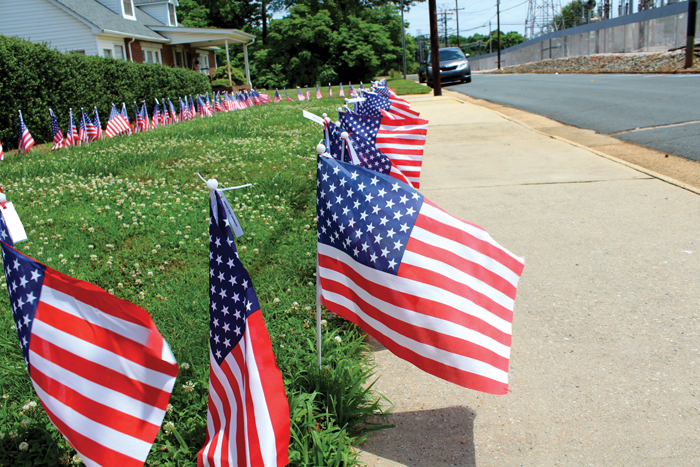 As the Friday afternoon sun inched temperatures higher, Tony and Lauren Wagoner started their Memorial Day weekend in the yard with their small children.

The kids splashed in a small kiddie pool while mom and dad lingered in the shade provided by South China Grove Baptist Church, of which Tony is pastor.

And the scene was picturesquely patriotic. Behind the family, some 120 United States flags billowed in the wind.

The flags were placed along the church’s sidewalks as part of its congregation’s annual Memorial Day flag display.

Lauren said that the display has drawn quite a bit of interest throughout the community. Living in the parsonage by the church, she and her husband are privy to many a passerby who slows to enjoy the view or take pictures.

The tradition was started by the late Sylvia Maria Aldridge Pinyan, who did a little bit of everything at the church. She taught Sunday School, was the co-church treasurer, was in the choir and more.

Pinyan passed in July of last year. Her son Rick has taken on overseeing the project.

Each flag is capped with a laminated name tag, representing a friend or family member who has served or is serving in the armed forces.

“We opened it up to our members and said, ‘hey, if you have somebody that you love that’s in service, either alive or dead, we want to give you the chance to honor them,'” said Tony.

Tony shared stories of members past and present who had served or are serving. Some of these were honored among the flags, such as ‘Tyree,’ who was 18 when the Invasion of Normandy occurred.

The man survived the invasion, living to be 90 before he passed, said Tony.

Another flag was placed in memory of Pinyan’s husband Buddy J., who served in the U.S. Naval Air Force during the Korean Conflict.

“Our church is definitely very patriotic,” Tony said. “… On Veterans Day, when we honor those who have served that are alive, probably half our church stands in terms of men.”

And as a pastor, Tony said that Memorial Day offers church members a chance to reflect on Jesus Christ’s death on on the cross.

“We definitely view the blessings and the beautiful things that flow from our nation. Freedom’s not free,” said Tony. “Christ, in the spiritual realm, gave us freedom when he died on the cross.”

He said that this example makes for a great Memorial weekend message, quoting John 15:13, ‘Greater love hath no man than this, that a man lay down his life for his friends.’