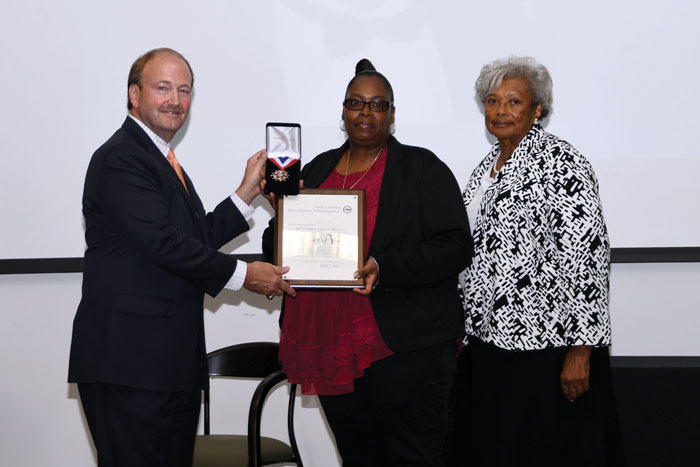 SBI Director Bob Schurmeier, left, presents a posthumous Medal of Valor award to the daughter of Albert Stout, Deloris Stout, center, and Stout’s sister, Sarah Lightner. Albert Stout was seriously injured when his car was bomed in 1974 while he was working undercover in Rowan County. Submitted photo

The State Bureau of Investigation recently posthumously awarded the Medal of Valor award to former SBI agent and Rowan County native Albert Stout, the victim of a 1974 car bombing.

Stout’s sister, Sarah Lightner, and about 17 other members of his family, attended the SBI’s annual awards ceremony at the SBI headquarters in Raleigh. Lightner accepted the award to a standing ovation.

Stout became an agent in 1972 and had been working undercover on a narcotics case in Rowan County. When he was getting into his Ford Torino outside his home on Sept. 10, 1974, a bomb exploded and Stout lost his right leg above the knee, his right eye, hearing in his right ear and partial use of his right hand. While the bomb destroyed the Torino, Stout survived.

He spent several months in the hospital and when he recovered, he didn’t let his injuries keep him from working. In fact, he worked cases for another 19 years. In 1993, Stout retired from the SBI and became a liaison police officer for Livingstone College until 2006. He died in 2016.

Lightner, a retired public school teacher, said their father taught them to keep on working and contributing.
A native of Rowan County, Stout served in the U.S. Army and received an honorable discharge in 1967. In 1969, he received a bachelor of arts degree from Livingstone College. He became the first African-American road deputy for the Rowan County Sheriff’s Office from 1969 to 1972.

The awards ceremony included commendations for community service, a partnership award for merit, commendations of merit, awards for excellence, meritorious service awards and the medal of valor award. Awards were handed out to 21 individuals or groups.