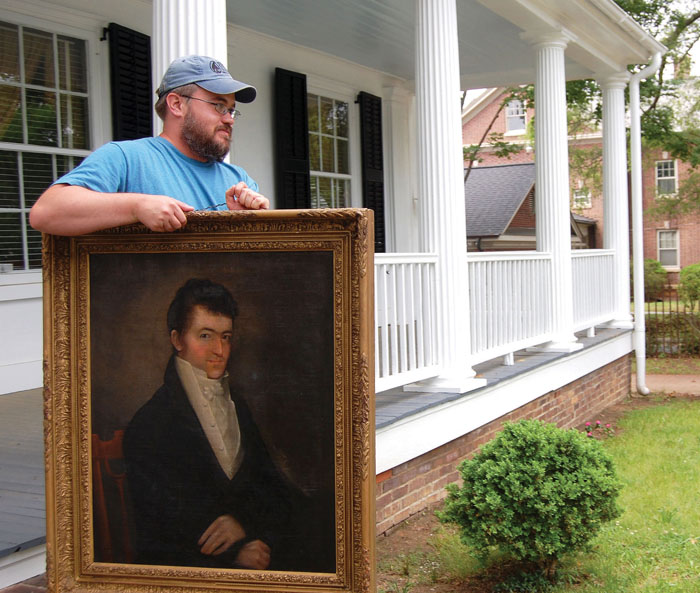 AMEILA SMALL / SALISBURY POST Rowan Museum Executive Director Aaron Kepley carries the portrait of Matthew Locke out of the Utzman-Chambers House during its relocation to the museum, where it will be on display next Thursday night for a fund-raising supper.

SALISBURY — Aaron Kepley carefully removed the portrait of Matthew Locke from the front parlor wall of the 1815 Utzman-Chambers House Thursday afternoon, walked it to his car and unceremoniously loaded it into the back seat.

If Locke could speak from this late 18th century painting, he would tell you it was fun to get a breath of fresh air and take his first ride in decades through the streets of Salisbury on the way to the Rowan Museum.

It is at the old courthouse museum, located at 202 N. Main St., where the portrait will be prominently displayed next Thursday when “A Spring Supper” is held supporting the Blue Sapphire Jubilee Anniversary (65th year) of Rowan Museum.

Dr. Gary Freeze, history professor at Catawba College, will be the guest speaker and his topic — you guessed it — will be Matthew Locke.

The 6:30 supper will be held in Rowan Museum’s Messinger Room upstairs, and some tables and chairs also will be available on the balcony.

Besides celebrating and kicking off Rowan Museum’s 65th anniversary year, the evening also raises money for the upkeep of Rowan Museum’s historic properties, which include the 1854 courthouse, the Utzman-Chambers House at 116 S. Jackson St., the Old Stone House in Granite Quarry and the China Grove Roller Mill.

Locke was an important figure in Rowan County’s early history, both politically and militarily. Freeze no doubt will touch on many of the particulars in Locke’s life.

For now, suffice it to say, he was a colonel and brigadier general for the Salisbury District during the Revolutionary War.

But Locke also was an anti-Federalist, who as a delegate to the state constitutional conventions in 1789 voted against ratification of the U.S. Constitution, though it passed by a good-sized margin and North Carolina officially joined the United States.

With a new constitution, Locke was elected to the U.S. House in 1792 and served until 1799, when Salisburian Archibald Henderson defeated him.

Locke, a planter and large land owner, became one of the Rowan followers of Thomas Jefferson’s politics. Locke died in 1801 and is buried in Thyatira Presbyterian Church in Millbridge.

Locke’s portrait, a portrait of his wife and a satin gown worn by Mrs. Lewis Beard to a ball held in honor of President George Washington’s visit to Salisbury in 1791 were all part of the earliest donations to Rowan Museum, which was founded in 1953.

All these years, the portraits and dress have been among the impressive artifacts that have been housed at the Utzman-Chambers House, where Rowan Museum holds the occasional lunch and reception.

The Matthew Locke portrait is thought to be the only one in existence.

The portrait of Locke’s wife carries some mystery with it. Which wife is it?

Locke was married two times, first to Mary Brandon around 1749, then to Elizabeth Towers Gostelowe in 1798.

“I don’t know if there’s a way to verify (who is depicted in the portrait),” Kepley said. “It could be either wife.”

The portrait of Mrs. Locke also will be on display at the “Spring Supper” Thursday evening.

“It’s kind of a way to connect our founding to where we are going,” Kepley said of the dinner and entire anniversary year, which will include the 65th annual Antiques Show in November.

Betty Mickle has done much of the work in organizing Thursday’s event and promoting it. She’s a fan of all the Rowan Museum properties, and especially the Utzman-Chambers House, one of the oldest in Salisbury.

As she rambles through the large rooms, both upstairs and downstairs, Mickle points out things such as the Daniel Boone-connected tombstone piece, the bust of Gov. John Ellis and the furniture pieces from James Gheen, an early Rowan County cabinetmaker.

Mickle stops at a framed document near the front door that lists the charter members of Rowan Museum. It’s another item that will be temporarily taken from the Utzman-Chambers House and be featured at Thursday’s supper.

Rowan Museum lost one of its most ardent supporters Tuesday with the death of Elizabeth “Lib” Taylor of Salisbury, who was actively involved with the museum from its birth until her last Antiques Show in 2015.

She served as Rowan Museum’s president from 1987-97, and from 1953 until her final report to the board of directors in 2013, Taylor was maybe the biggest advocate of the Antiques Show.

In 1999, Rowan Museum established a garden in Hurley Park in honor of Lib and her husband.

“The Rowan Museum would not be where it is today without her dedication and energy,” a museum statement said at her death.

Taylor’s  father, onetime Salisbury Mayor Ernest Hardin, was responsible for the purchase and restoration of the Old Stone House. He was among the charter members of Rowan Museum and served as its president from 1956-74.