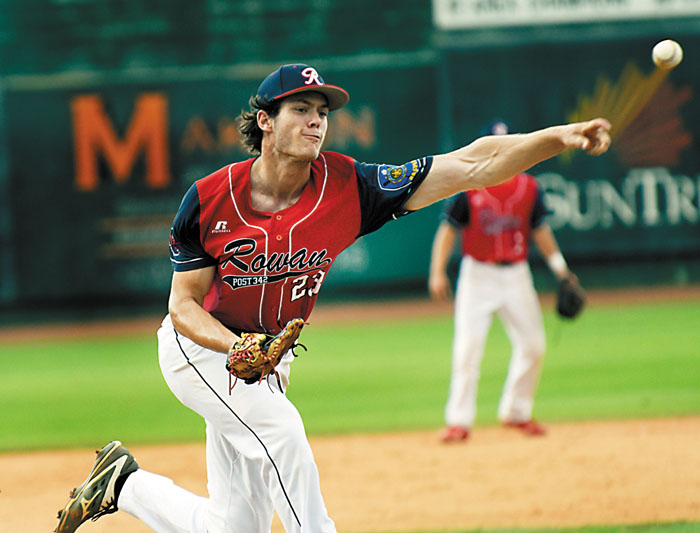 SALISBURY — It was scheduled to be the longest day of the American Legion season, but weather made it one of the shortest.

Rowan County was supposed to play a doubleheader with Eastern Randolph Post 81 on Saturday, but instead the locals settled for a rain-shortened, 2-1 win in Game 1. Unbeaten Rowan had just gotten the visitors out in the top of the fifth, making it an official game, when the skies opened up. A torrential downpour soaked Newman Park. After an extended conversation between umpires and coaches, it was decided no more baseball would be played.

“It’s been a wet spring and now it looks like we’re going to have a wet Legion summer,” said Seth Graham, who is filling in at head coach with Jim Gantt away at the Division II World Series in Cary.

The infield and home plate area drain well at Newman Park, so the field probably could’ve been restored to playability with time and hard work. But with more rain on the radar screen, and with the games being of the non-league variety, everyone agreed the prudent course of action was to move on. Neither team wanted to lose an outfielder to an injury on what would’ve been soggy and treacherous terrain.

It was a relatively sparse crowd at Newman, with many fans probably sitting at home, listening to WSAT on the radio and waiting to attend the nightcap. Those who were there got to see sharp pitching from East Rowan’s star lefty Hayden Setzer and good offense and defense from three Carson outfielders —left fielder Luke Barringer, center fielder Cameron “CP” Pyle and right fielder Clayton Gilmore. Pyle and Gilmore can run. Barringer can rake.

“Barringer hit a 1-and-2 breaking ball into the trees against us this year when we played Carson,” said Graham, who is West Rowan’s head coach during the school year. “He’s just so strong. He doesn’t have to swing hard to hit it out, but sometimes he tends to over-swing. That’s what we’re working on with him.”

Pyle, a freshman at Carson, played second base for the Cougars because they had all-county senior Brycen Holshouser in center field. But Pyle looks like a natural in the outfield. He’s also likely to make some noise for Carson football this fall  as a running back.

Pyle said he’s been primarily a shortstop and center fielder growing up.

That kid has got a chance to be a really special player for a long time,” Graham said. “His speed really shows up more in the outfield.”

Pyle made a running catch as he got to the warning track in right-center to end the fourth inning. That grab brought a roar from the crowd.

“He’s good out there,” Gilmore said.  “Strong arm and a lot of speed.”

Setzer, a Catawba signee who  homered at High Point, wasn’t in the batting order. Coaches wanted him to focus on pitching, and he was outstanding. He put down the visitors 1-2-3 in the first, faced only three hitters in the second with the aid of a 4-6-3 DP, and enjoyed another clean inning in the third. He walked a batter in the fourth, but Pyle’s catch of a long blast by cleanup hitter Jordan Cassell ended the inning.

“I’ve been  speeding things up a lot lately, and the advice I got from (pitching coach) Russ Weiker was to try to slow things down,” Setzer said. “I slowed down my delivery today and  I lowered my arm angle some. Those adjustments helped, and it was a good day to pitch. We had a plate umpire that was a pitcher’s umpire, and the guys were playing great defense behind me.”

For three innings, Post 81 pitcher Evan Stern, a Providence Grove High right-hander who is headed to Methodist University, blew through Rowan’s lineup. Gilmore walked to start the bottom of the first, but he was erased by a double play. Stern still had a no-hitter going to the fourth when he faced Gilmore for the second time.

Gilmore, who batted ninth for Carson, whipped a 1-and-2 pitch into left field, and the outfielder had to move laterally several steps to cut it off.  It would have been a single for most Rowan hitters, but it was a sliding double for Gilmore.

“I came out of the batter’s box hard —  that’s one of the things we stress doing every time,” Gilmore said. “I picked up the first base coach (Adam Patterson) and saw he waving me to go to second. I got in there.”

When Gilmore dashed for third base on a pitch in the dirt, what looked like an accurate peg from the catcher got through into left field, and Gilmore came home with the game’s first run.

“Gilmore is doing a good job for us in the leadoff spot — we like him up there,” Graham said. “His other at-bat in the first inning, taking a walk on a 3-and-2 pitch, that was a nice at-bat also.”

Rowan catcher Trevor Atwood also had an interesting trip around the bases in the fourth inniing, albeit at a slower pace than Gilmore. Atwood was hit by a pitch, reached second on that same wild pitch that triggered Gilmore’s run and made it to third when Chandler Lippard’s groundball was booted. Then Barringer came through with a two-out hit. He didn’t over-swing, didn’t try to do too much. He slashed a hard groundball through the left side, and Atwood jogged home for a 2-0 lead.

Eastern Randolph (0-3) broke through against Setzer in the top of the fifth on a two-out RBI single by Matt Moody. Setzer got the third out of the inning on a flyball that was  hit well to Gilmore in right. That turned out to be the final out of the game. As Rowan players hustled off the field, ready to try to boost their lead, the rain started, and it didn’t stop for a while.

Setzer (1-0) allowed three hits and one walk in his five innings while striking out five.

“He executed all his pitches,” Graham said. “This was the best command he’s had in a while.”

“But the game is different this year,” Graham cautioned. “Seven-inning baseball games are a whole lot different than nine-inning games. We always felt like we had an advantage once the game got late, once it got down to the bullpens, but starters are going to be finishing more games this year.  I think we’ll be OK. Our offense might be scarier than we thought it would be. Those guys in the middle — Setzer, Lippard, Atwood, Barringer, Wayne Mize — there’s some power there. Every time we go through the middle of the lineup, we should score a run.”

Rowan is home tonight against Kernersville.