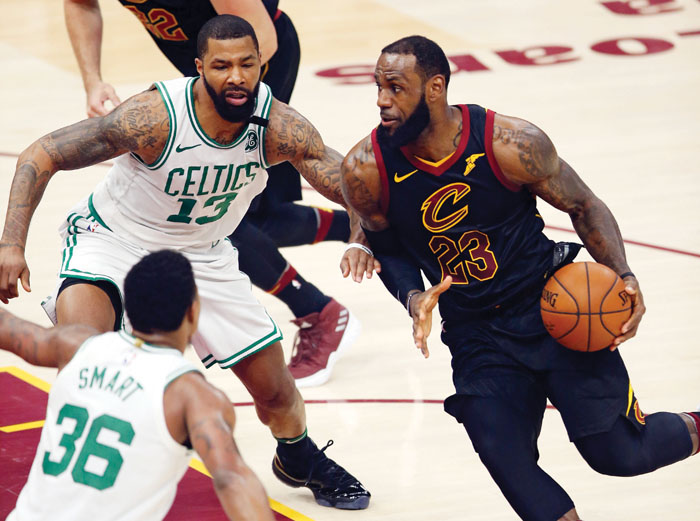 Game 7 is on. And any talk about James’ future is on hold.

James scored 46 points and preserved his reign atop the Eastern Conference for at least one more game as the Cleveland Cavaliers shook off losing All-Star Kevin Love with a head injury and beat Boston 109-99 on Friday night to force a decisive climax to this back-and-forth series.

James, playing in perhaps his final game for the Cavs in Cleveland, delivered another sensational performance — he added 11 rebounds and nine assists while playing all but two minutes — to avoid elimination and delay any decisions about where he’ll continue his remarkable career next season.

“Greatness,” Cavs coach Tyronn Lue said. “Gave it his all. We needed that, especially with Kevin going down. He delivered. He carried us home as usual.”

The king is not dead, and he still has a chance to make his eighth straight NBA Finals.

“It feels good just to be able to play for another game,” James said. “Like I’ve always said, Game 7 is the best two words in sports. … We should relish the opportunity and have fun with it.”

This series, in which home court has meant everything, will have a fitting conclusion Sunday at TD Center, where the Celtics are 10-0 this postseason.

“We have one game to be able to compete for a championship, and what more could you ask for?” James said. “If I’d have told you at the beginning of the season we only needed one game to make the NBA Finals, we’d take it.”

George Hill added 20 points, and Jeff Green 14 for the Cavs, who lost Love in the first quarter after he banged heads with Boston’s Jayson Tatum.

Terry Rozier paced the Celtics with 28 points, and Jaylen Brown had 27.

The Celtics were still within seven in the final three minutes before James made consecutive 3-pointers, punctuating the second by pounding his chest with both fists and screaming along with 20,562 others.

Just for good measure, he added a three-point play and then was taken out of the game to a rousing ovation and chants of “Cavs in 7!”

“Just a lot of heart, a lot of grit, being resilient,” James said.

Boston’s improbable run through the postseason without injured stars Kyrie Irving and Gordon Hayward will now take the Celtics back home, where they play with more intensity, togetherness and before fans hungry to see an 18th title banner raised to their arena’s rafters.

Love went out with a head injury in the first quarter, forcing Lue to juggle his rotations and keep James on the floor longer than he wanted to. The three-time champion played the first 35 minutes without a break and then endured the final eight while nursing a sore lower leg.

Backed by a sea of towel-waving fans wearing white “Cleveland Whatever It Takes” T-shirts, James did just that to push the series to Boston, where he has had some of his biggest moments on the renowned parquet floor.

In 2014, he had 45 points, 15 rebounds and five assists in Game 6 for Miami, which went on to win Game 7 and the NBA title. He also scored 45 in a Game 7 loss for Cleveland in 2008, and now has a chance to boost his stunning resume further if he can get the Cavs to a fourth consecutive Finals.

James has also had some bitter memories in Boston. He lost Game 6 in the East semifinals in 2010 to the Celtics and was soon on his way to joining the Heat.

The game began ominously for the Cavs as Love was forced to leave following his violent collision with Tatum.

Love and Tatum were away from the ball and didn’t see each other until it was too late. They banged heads and both immediately dropped to the floor with Love raising his left arm as if to signal he needed help.

As Love stayed down, the Cavs huddled around him. He was helped off and walked to the bench unsteadily before heading to the locker room for further treatment and evaluation.

The Cavs announced an hour later at halftime that Love wouldn’t return. His status for Game 7 is uncertain.

The real possibility that James was playing his last game in Cleveland hung over the game — and this city — in the hours leading to tip-off. Everyone had an opinion on what James will do next and that discussion filled the sports talk radio airwaves, bars and barber shops.

The 33-year-old has said several times since coming home in 2014 that he wants to retire with the Cavaliers, but fans are uneasy because he can opt out of his $35.6 million contract this summer and test free agency.

James has said he’ll sit down with his family after the season ends to plot his next move, and he’s already being courted in Philadelphia, Los Angeles and New York who can only dream about adding him to their rosters.

For now, though, he’s only going to Boston.

Celtics: Own a 37-0 record when leading a series 2-0. … Dropped to 1-4 in Game 6s over the last four postseasons. … Coach Brad Stevens praised James for his consistency, and ability to exceed expectations. “Nobody else has what he has on his shoulders playing the game,” he said. “I think that the way in which he’s done that and all of the years now that he’s made The Finals and gone deep into the playoffs, it’s unbelievable.”

Cavaliers: Improved to 6-2 in elimination game since 2015. … James’ teams are 5-2 in Game 7s. … This was the seventh 40-point game for James this postseason. Michael Jordan also had seven, one off Jerry West’s record set in 1965. … James passed Karl Malone (2,062) for sixth place on the career postseason rebounds list.