Salisbury senior Isaac “Trell” Baker, a standout as a football receiver and basketblal guard, was honored as the league’s outstanding male athlete.

Also presented was the Charles England Sportsmanship Award, which went to Oak Grove.

The meeting was held at the Rittling Conference Center at Davidson County Community College.

ABCA All-America teams will be announced on Tuesday. Catawba coach Jim Gantt is on the All-America committee.

Zack Gahagan followed Martorano’s homer with a two-run shot of his own during the five-run third inning that put the top-seeded Tar Heels (38-18) in control of a game that was inconsequential to the semifinal pairings. Pittsburgh, the No. 12 seed, had already advanced out of the three-team pool by beating both of these

DURHAM  — Devin Mann drove in three runs, Adam Wolf struck out nine and Louisville beat Duke 9-2 on Friday to advance to the semifinals of the Atlantic Coast Conference Tournament.

Josh Stowers and Zach Britton each had two-run singles during the four-run first inning that put the fifth-seeded Cardinals (42-16) in control.

Louisville has won five straight and 10 of 11, and after going 2-0 in pool play, will play 12th-seeded Pittsburgh on Saturday in the semifinals.

Cameron Padgett was the winning pitcher and hit a grand slam in Erwin’s win against China Grove in the middle school tournament championship game.

Free’s professional baseball career began in 1952 when he played for the semi-pro Greensboro Redbirds at the age of 15.  After a three-year stint in the U.S. Army, he joined the Raleigh Tigers in the Negro Leagues in 1959 and played in the last East-West All-Star Game at Comiskey Park in 1959.

Free barnstormed with Satchel Paige in 1960, then played for the Western Carolina League’s Hickory Rebels in 1960.

The new inductees will be honored as part of the festivities surrounding the 59th Annual South Atlantic League All-Star Game, scheduled to be played on June 19  at First National Bank Field, home of the Greensboro Grasshoppers.

Bolton (1-0) struck out eight and walked one to get the win.

In the bottom of the first, West Virginia scored on a double by Mitchell that brought home Chris Sharpe. Later in the inning, Oneil Cruz hit a sacrifice fly to give the Power a 2-0 lead. The Power then added a run in the third and two in the eighth. In the third, Mitchell hit an RBI single, while Cruz hit an RBI double and then scored on a single by Brett Pope in the eighth.

The Intimidators were held scoreless for the fourth time this season, while the Power’s staff recorded their fourth shutout of the year.

FAYETTEVILLE, N.C.   — Workers accepted to build a baseball stadium in North Carolina for a minor league team of the Houston Astros will be paid while they train for their jobs.

The city signed a contract with the Astros in December, 2016. That contract says a minor league team will play at the stadium for at least 30 years, starting next year.

East Rowan’s  Bryson Sprinkle, the North Piedmont Conference and Rowan County Golfer of the Year, will sign with Catawba  next week.

South Rowan running back DeMarcus Blackwell, Class of 2019, was a standout at the  recent Blue-Grey  All-American Bowl Georgia Regional Combine in Atlanta.

Blackwell (5-7, 175) has been invited to participate in the Mid-Atlantic Super Regional combine at the Washington Redskins Training Facility in Richmond on June 23-24.

A number of Rowan players competed in the North Carolina Regional Combine held in Greensboro in late March.

Woodruff (6-2, 220) also played on the offensive line and punted for Carson.

An injury cut his sophomore season short, but Courtney (5-9, 163) had 283 rushing yards and four TDs for the Cougars when he was hurt.

Hurd (5-6, 150) caught TD passes for South against Lexington and Salisbury and also had a big night against North Davidson.

Rowan County’s scheduled game at Kannapolis on Friday was canceled.

The South Charlotte Panthers have a host of Rowan County players and their teams will get started this weekend.

Nathan Chrismon, a China Grove youngster who is headed to South Rowan, is on the 2022 SC Panthers.

Parker’s deal includes over $4.1 million in total money and a signing bonus of more than $1 million.

The Raiders traded up for Parker at No. 65 overall and intend to mold him into their right tackle of the future under new OL coach Tom Cable.

The Blue Devils will head to Canada to play a three-game exhibition series in August.

Barrett is a key member of Duke’s latest crop of potential one-and-done players.

The small forward played his senior season in high school at Montverde Academy in Florida. 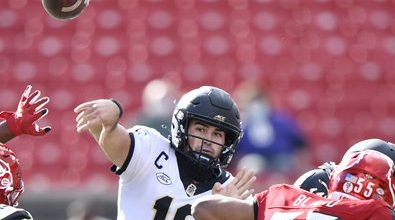