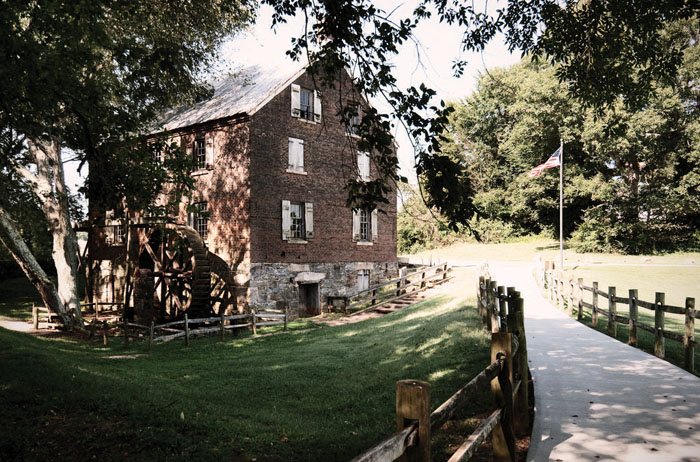 MOUNT ULLA — In early May, Rowan County posted a request for proposals on a project involving a local treasure: the water wheel at Kerr Mill in Mount Ulla.

The request sought to “rehabilitate and repair (the) existing gristmill water wheel.” This means removing the existing structure, welding and repairing its metal components, constructing a duplicate and installing the refurbished product.

“We’re trying to get some people interested in it and to start sending bids in on the project,” he said.

Byrd said the wheel, itself a replica of an original 1820s structure, is in obvious disrepair. That’s to be expected given its constant contact with water, he said.

He said it hasn’t been turned in close to a year.

The history of the wheel is intertwined with that of the mill’s restoration.

The mill was built in 1823 by Joseph Kerr, primarily for use on his own 2,000-acre plantation.

It was purchased by the uncle of James Sloan in 1908. Sloan and his wife, Carrie, gave the property to the Rowan County Historic Properties Commission in 1973 in exchange for its restoration.

Since its first owner, the mill has seen many stages of operation. The first was with a water wheel similar to the one that may be restored.

It was converted into a power-roller mill in the 1880s and a diesel engine in 1924. But operations closed at the site in 1933, during the Great Depression.

In the 1980s, archaeologists tried to find the water wheel through excavation. The mill remained without a wheel until 1989.

Parks and recreation officials searched for a wheel after the completion of Sloan Park in 1983, built on land from the mill and neighboring farmland given by the Roy A. Morgan family.

They thought they’d found one in West Virginia but discovered after a drive up that it wasn’t the right fit for Kerr Mill.

Luck would have them pass Mabry Mill on the drive home, and a talk with workers at the site led them to a pattern: a pie-slice, full-size section of the wheel.

Keith Yount’s Sherrill’s Ford Road construction company built the wheel and donated it to the county using this pattern.

Yount estimated the white oak structure would take a week to complete and measure about 12 feet in diameter. The project took two months and resulted in a 15.5-foot piece of artistry.

Byrd said not much of the near-30-year-old structure is salvageable. After the restoration, only the metal drum at its center will remain.

More information about the request for proposals can be found on the Rowan County website at www.rowancountync.gov.

The deadline for submissions is 5 p.m. May 31. Sealed proposals should be clearly labeled “Water Wheel Restoration” and be sent to the Rowan County Finance Department to the attention of David Sifford, purchasing agent.

Contact David Sifford at 704-216-8174 or david.sifford@rowancountync.gov for more information about the project.