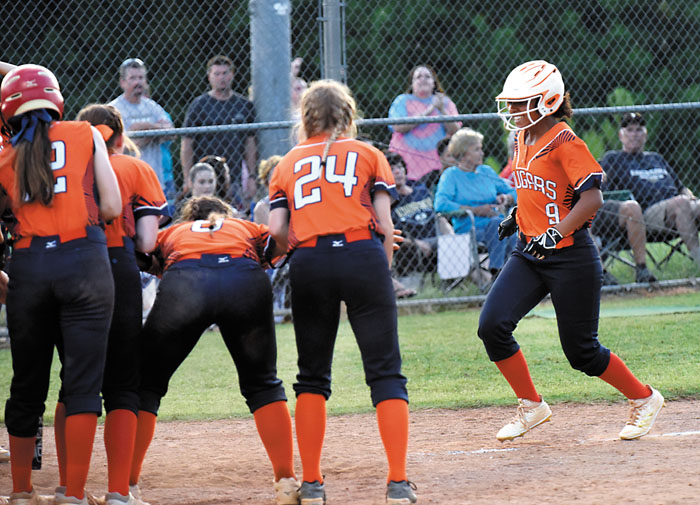 Wayne Hinshaw/for the Salisbury Post ... Carson’s Sierra Ratliff (9) is greeted at the plate after her pinch-hit home run in the sixth inning brought the score to 10-8.

CHINA GROVE — The lopsided final score definitely was misleading, but the reality was that Carson’s softball team just couldn’t get Alexander Central out on Thursday night.

“They just kept hitting the balls in the hole and hitting them up the middle,” Carson senior Jessica Freeze said. “Most of those balls, we didn’t have any chance on.”

Alexander Central led all the way and battered Carson, 20-8. The third-seeded visitors banged out 24 hits, including four homers, and swept the best-of-three 3A West Region championship series. Alexander Central had held on, 5-4, in a heated contest in Game 1 in Taylorsville on Tuesday.

Game 2 was a tense ballgame for a long time, still 10-8 going to the seventh inning, but that’s when Alexander Central (26-5) launched three lasers into the trees against Carson hurlers who were emotionally and physically spent.

“They got at a look at Katie Jewell and me in that first game, and they’ve got a great program that does a lot of stat-keeping and videoing,” Carson starting pitcher Rylie Stewart said. “They used the day in between games to really study and prepare for us and they worked on the things that they saw. They were just ready to hit tonight, and they are very, very, very good. We gave it all we’ve got. We just couldn’t find a way to stop them.”

Kelsea Dejarnette had four hits and six RBIs for the visiting Cougars, while Julie Gast went 5-for-6. Dejarnette socked two homers, including a huge one with two outs in the sixth to make it 10-6. Gast and leadoff batter Lanie Goforth also homered for the guests.

“They earned it,” Carson coach Charissa Duncan said. “We made some defensive mistakes, but mostly they earned it. They liked the speed of our pitchers. They crushed the ball.”

Fourth-seeded Carson (20-8) swung it well enough to win most games, especially playoff games. It  had 12 hits, with Maci Cooper, Kary Hales, Kaitlyn Honeycutt and Jewell getting two each. Pinch-hitter Sierra Ratliff thumped a two-run homer. Honeycutt hit a solo shot, and Freeze had a two-run double.

“I told Chesney at the start of the season that she can’t get sick and she can’t get injured,” AC coach Darrell Atkins said. “If she gets in trouble, she just has to fight through it. Carson is a very good team. They scored some runs on Chesney, but she is a mentally tough girl. She’s going to hang in there. She going to compete. She knows we’re going to hit for her and that we’re going to make some good plays behind her.”

Alexander Central’s five-run top of the first was big, but not decisive. Stewart was one step away from a scoreless inning, but a potential double play ball up the middle turned into a disaster for Carson. The ground ball appeared to be leading Jewell, the shortstop, straight to the bag, but in her haste to turn two, the ball rolled under her glove. The visitors wound up sending nine  girls to the plate in that inning and knocking out Stewart. Jewell replaced her in the circle, but once Jewell departed shortstop, a Carson defense that was already playing without first baseman Liza Simmerson, started to spring leaks.

Carson came back with four runs in the bottom of the first, all with two outs. The key blow was Freeze’s two-run double to the wall in left-center. Stewart smoked an RBI single right behind her.

The game settled down after that frenzied start, but AC used aggressive base-running to force Carson mistakes and scored a momentum-changing run in the third for a 6-4 lead.

“Running the bases, taking the extra base, putting pressure on the defense, that’s a big part of our game,” Adkins said. “We’re going to keep stealing until you throw one out, and they didn’t.”

Jewell is usually waiting at second base, making the tags for Carson on steal attempts, but she was in the circle. Catcher Skyler Smith was trying to hit a moving target, as fill-in shortstop Hales raced toward the bag, and the timing just never worked for the Cougars. The visitors ran at will.

Alexis Walter doubled home a run for AC in the fourth to make it 7-4, but Jewell sent a triple screaming into right field to score Cooper from first and get that run back in the bottom of the fourth.

A sac fly bumped AC’s lead to 8-5 in the fifth. Again Carson fought back in the bottom of the inning. This time on Honeycutt’s opposite-field homer leading off.

Down 8-6, Carson still had a great chance after turning a 4-6-3 double play in the top of the sixth. But with two outs and none on, Walter whipped a single, one of her four hits, and Dejarnette followed with a bomb for a 10-6 lead.

Still, not done, the home-standing Cougars got two quick runs in the bottom of the sixth. Cooper got on base and pinch-hitter Sierra Ratliff unloaded a stunning homer to left to cut the deficit to 10-8. Most of the time Ratliff is employed as a pinch-runner, but she got all of that one.

“Seeing girls do things like that, coming off the bench to get a big hit like that, that’s what made this season so much fun,” Duncan said. “So many girls came so far. We had so many accomplishments.”

With its top three hitters coming up next with no outs — Jewell, Hales and Honeycutt – Carson had a real chance, but Millsaps won the battle when she had to. Two groundballs and a popup later, it was still, 10-8, and Alexander Central was back in the batter’s box.

And then it all fell apart for Carson. Duncan used Jewell, then Stewart for the second time, and then Hales in the circle. But the visitors just kept ripping. Carson made three errors in the inning. Things got out of hand.

In the bottom of the seventh, Carson went down quietly, and it was over. AC enjoyed a well-deserved celebration, while Carson players could only shake their heads and dream about what might have been.

“After seeing that team on Tuesday, the way they hit the ball tonight just came out of nowhere,” said Carson’s senior left fielder Haley Howerton. “But I’m still proud of everybody. This team made history and I don’t think anyone will  ever underestimate Carson softball again.”

Carson loses three senior starters — Stewart, Freeze and Howerton — as well as reserve Kaitlyn Stout. Stewart is the one that got the Cougars rolling to 11 straight victories with a long string of shutouts, but she missed her spots against Alexander Central and every mistake against those powerful hitters meant a line drive somewhere.

“We did all we could,” Duncan said. “We had one heck of a season. We’ll remember making it this far, and hopefully we can build on it.”

Alexander Central, a perennial 4A power that has moved down to the 3A ranks this season, advances to the state championship series.