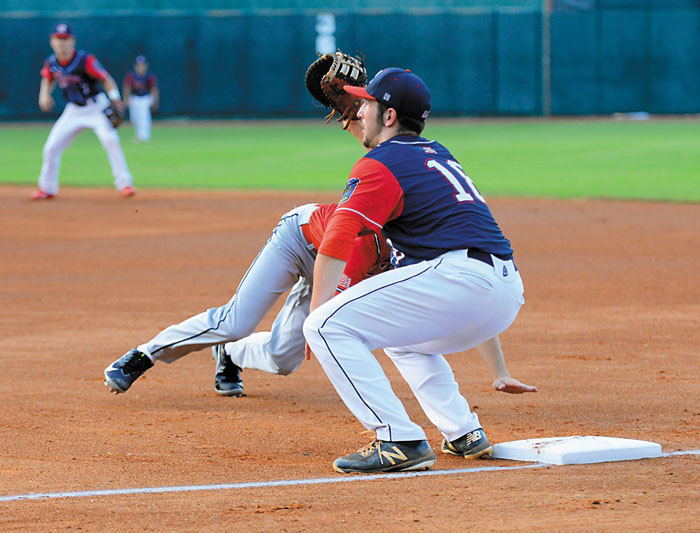 Concord's Noah Love dives back to 1st on a pick off play with Chandler Lippard covering, during a recent game. Rowan defeated High Point on Thursday night, 7-4. photo by Wayne Hinshaw, for the Salisbury Post

THOMASVILLE — The Rowan County American Legion team swung the bats early and hung on to beat High Point, 7-4, on Thursday at Finch Field.

High Point is always one of the tougher programs in Area III.

Rowan expanded the lead to 6-0 in the second. Lippard notched his second RBI of the night, and Atwood’s double plated two runs.

Hayden Setzer unloaded on a long homer to center field in the fourth, a solo blast for a 7-0 lead, but that’s where Rowan’s offense stopped.

Rowan (3-0) managed only a couple of hits the rest of the night.

Lefty Daniel Durham baffled High Point for three innings, but Post 87 started to make noise in the fourth and embarked on a comeback.

From that point on, Rowan was holding on.

John Owen was the winning pitcher. He relieved in the fourth and  was still around at the end. He got the final outs in a tense situation. High Point (0-1) had the tying run at the plate in the seventh.

Kannapolis (1-4) fell to Mint Hill, 12-9, on Thursday. Jacob Tuttle and Lane Argabright had two hits each for Kannapolis. Andrew Tan took the loss. Josh Swartz drove in six for Mint Hill, which made a late rally.