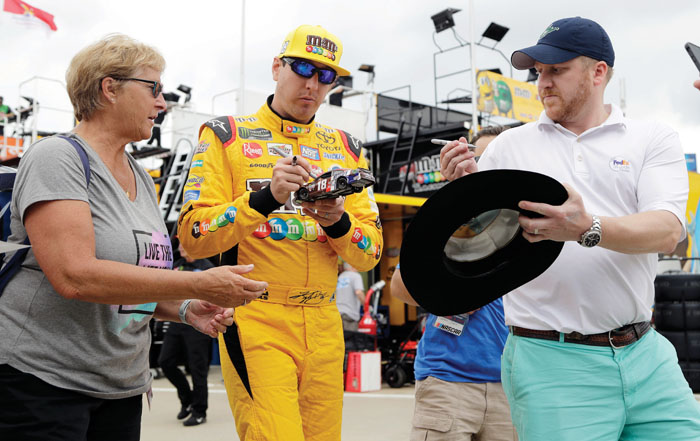 CONCORD (AP) — Kyle Busch is hoping his third career pole at Charlotte Motor Speedway will help end a dubious drought at a track that has frustrated him for years.

Kevin Harvick is probably just anxious to get back on the track.

Busch took the pole Thursday night for the Coca-Cola 600 on Sunday, while NASCAR Cup Series points leader Harvick will begin in the rear. Busch has never won a Cup points race in his previous 28 starts at Charlotte, although he did win an All-Star race here.

“We have had some really good runs here in the past, but we just haven’t been able to close the deal,” Busch said, referring to his 11 top-five finishes.

Busch won his 30th career pole for NASCAR’s longest race by turning a lap of 191.836 mph at Charlotte Motor Speedway. Joey Logano will start alongside Busch on the front row.

But the big surprise was Harvick, who never got on the track after failing pre-race inspection three times. Car chief Robert Smith was ejected, and Harvick will have to sit out the first 30 minutes of practice Saturday.

Harvick has been dominant this season, winning five Cup races — including the last two — and the $1 million exhibition All-Star race Saturday.

Logano joked that with everyone chasing Harvick “it sure don’t hurt” that he has to start at the back of the field.

But he doesn’t expect that to last for long.

“Are we taking bets on how long it will take him to get up there,” Logano said. “Where is the new betting thing? Is that what we’re doing now.”

GIBBS CARS DOMINATE: Busch won’t have to look too far back in his rear view mirror to find his Joe Gibbs Racing teammates. All four of Gibbs’ Toyotas finished in the top 10 with Denny Hamlin qualifying third, Erik Jones fourth and Daniel Suarez 10th.

“That was a tough one,” Suarez said. “When you finish fourth, fifth, third, you know you get it. You go to the next one excited, but when you finish second, that close, it hurts a little bit. But that’s part of racing. You have to learn from that and move to the next one.”

TRUEX STRUGGLES: Martin Truex Jr. failed to make the final round of qualifying and will start 15th, which is a bit of a surprise.

Truex has two wins in the last four races at the track, including one of the most dominant performances in NASCAR history in leading 392 of the 400 laps to win the 2016 Coca-Cola 600. Truex has five top-five finishes in the last six races at Charlotte.

Truex led a race best 233 laps in last year’s 600 only to finish third in a fuel mileage race won the Austin Dillon.

“No front tire grip,” Truex said of his night.

BUMPY ROAD: Logano called Charlotte Motor Speedway the bumpiest course that drivers face all year, saying it is “brutal” in the driver’s seat.

“It’s like driving down a cobblestone road,” Logano said. “It bounces your head around a lot.”

Dillon, who won the Daytona 500 earlier this year, will start 12th. Dillon said he thinks he has a top-5 car and can repeat.

“Yeah, really pumped about the effort that we put in to these Coke 600 cars,” Dillon said. “It paid off, obviously.  …   At least we’ve got a direction and we will keep working hard to get there.”

CONCORD (AP) — Charlotte Motor Speedway President Marcus Smith learned a long time ago from NASCAR Hall of Fame father Bruton Smith not to be afraid to try “new and crazy” things when it comes to auto racing.

That’s why the younger Smith lobbied NASCAR hard to use the same rules package for Sunday’s Coca-Cola 600 that was experimented with in the All-Star race. Even though Kevin Harvick led the final 11 laps and rolled to his third consecutive win this season in the $1 million shootout, the restrictor plates created a tighter field and improved on-track action.

Smith said he received an overwhelming amount of positive feedback from fans this week who want to see the same race setup for NASCAR’s longest race.

But stock car racing’s governing body ultimately decided against changing the setup it has been using in regular Cup races this season, leaving Smith a little disappointed.

“I am all about the fans,” Smith said. “I want what the fans want, and sometimes I want to try things the fans don’t even know they want.”

With NASCAR’s longest race of the season up next — the 600 is a marquee event because it is 100 miles longer than anything else on the schedule — Smith wanted to ensure an entertaining event and pushed for a similar setup for Sunday.

The race is the third on the biggest day of motorsports in the world, and it is the nightcap to Formula One racing in Monaco and the Indianapolis 500.

His intentions are good, but not practical.

NASCAR could not change the rules for a crown jewel race days before the event. Doing so would be an expensive and difficult endeavor for the teams, and not all would be able to prepare for a different rules package in the same amount of time. So ultimately changing the rules on very little notice was deemed unfair to the teams and the integrity of the competition.

“Logistics were against us in the way the teams work and do so much ahead of time,” Smith said. “But I am really happy with the way the sport overall has responded. There’s a really good shot we are going to see it (the package) more” in the future.

While the drivers were fine experimenting with the package in the non-points All-Star race, they weren’t keen on pack racing on a 1.5-mile speedway.

The restrictor plates also slowed the cars tremendously, so once a driver hit his setup, all he had to do was basically steer and try not to make a mistake.

“You got to be careful about taking that sample size and saying it is going to be the greatest thing ever,” said Matt Kenseth, driver of the No. 6 Ford. “When you take that rules package and let them work on it in the garage for a month things will be very similar to how they were. It was a good thing to try, but it’s not exactly what I want to see on a weekly basis.”

That said, six-time Cup champion Jimmie Johnson said he won’t be surprised if NASCAR adopts some form of the All-Star race package soon.

“There seems to be a very positive response in what was seen in the race,” Johnson said. “I know there is a lot of consideration being put into it and we might just have to try it somewhere to see. That could be the realistic next step to try it at a real points race and see.”

It just won’t be this week.

“I knew the odds were definitely against me,” Smith said if his politicking with NASCAR. “But I had no idea we would get the incredible positive support that have all just jumped in on this and said ‘This is the direction we need to go. It may not be perfect, but let’s not let perfection be the enemy of progress.’”