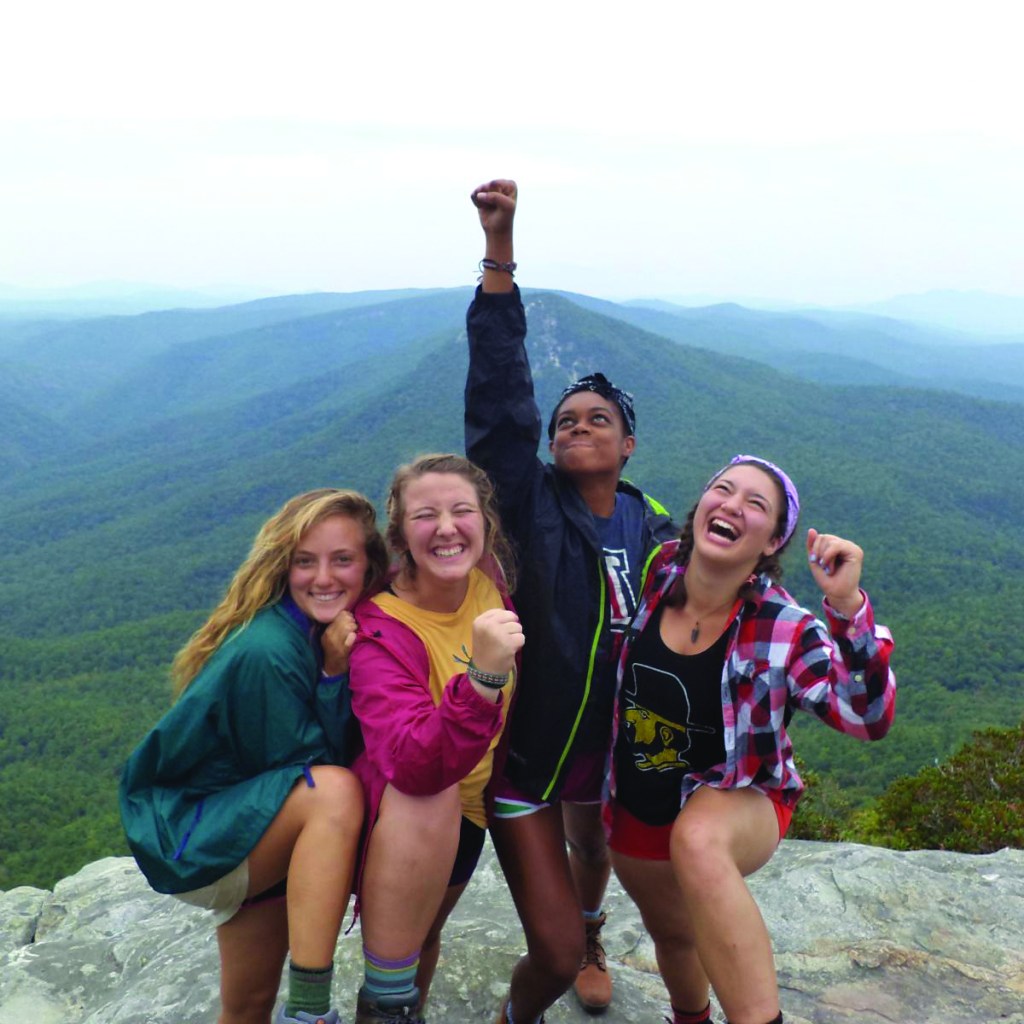 Submitted photo/Appalachian State University The inaugural Wilson Scholars, as new students, atop Table Rock in the Pisgah National Forest. The steep hike, according to Sarah Aldridge, second from left, became a metaphor for overcoming obstacles on the path to academic success. Left to right: Emma Labovitz, Sarah Aldridge, Juliet Irving and Lily Shaw.

BOONE — Appalachian State University chose its inaugural Wilson Scholars in 2014 for their extensive leadership and service experience in high school, as well as their academic success.

Lily Shaw, Emma Labovitz, Sarah Aldridge and Juliet Irving said the scholarship program honed their skills in each area, while also allowing them to explore new possibilities and see how diverse academic interests could intersect with leadership and service.

Three of the scholars graduated from Appalachian State University on May 12, and the fourth is staying another year to finish her double major.

Labovitz has accepted a policy internship with Tevel, a service organization in Nepal. She said she believes in the power of relationships and interpersonal connections and how they can facilitate change — something she said she learned from her Appalachian professors.

“I am excited to use this opportunity to invest and learn from the community in Nepal. When it comes to service, particularly international service, it is important to be aware of how you seek to cultivate community and grow relations through working alongside others,” Labovitz said.

Her long-term goal is to enter a Ph.D. program in political science and become a college professor.

Having started with just four students, the Wilson Scholars program totaled 20 students in 2017-18. Six more have been named for the 2018-19 academic year. The encouragement the scholars provide one another, the graduating seniors said, has been just as influential as the program’s faculty direction and support.

“We all have diverse interests and backgrounds and identities and passions. The Wilson scholarship is great because it’s an aggregate of diverse people, who all lead in their own unique ways,” Labovitz said. “The others have pushed my leadership style and made me reflect and rethink how I lead.”

The Wilsons created the scholars program with a $3 million contribution to the Campaign for Appalachian. At the time, it was the largest gift ever made by alumni.

The Wilsons host dinners for the scholars and invite them to football tailgating. They make a point to connect with students when they visit the cities where the students might be interning.

“I’m very grateful for what they’ve done for me and for my family, and I’m also grateful for them in particular. They actively work to cultivate relationships. They really care about us and our journeys and ensuring we’re successful. I can never thank them enough for what they’ve done and the experiences they’ve allowed me to have,” Labovitz said.

“The first Wilson Scholars graduates leave Appalachian with a distinguished and diverse record of leadership, academic excellence and service,” said Brad and Carole Wilson, Class of 1975, who created the scholarship in 2013. “These outstanding graduates exemplify the qualities we envisioned when we established the Wilson Scholars. Their Appalachian Eexperience has equipped them to achieve great success, and we know they will.”