Rationalizing your candidate’s lies could be a rush 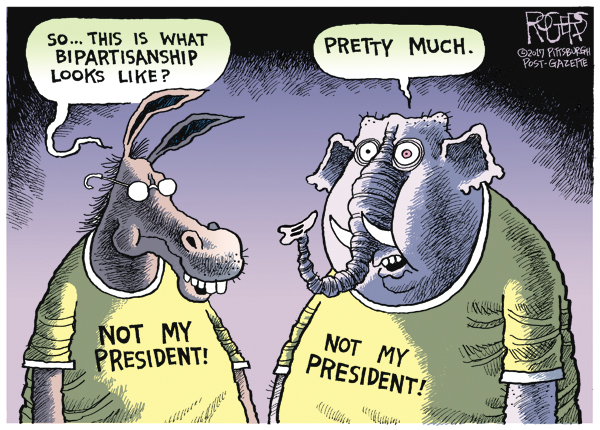 From “The Trouble With Reality,” by Brooke Gladstone:

You alter only what you must to avoid collateral damage to the code you live by. To do otherwise would both deny you serenity and defy your biochemistry. It’s behavior bred in the bone, and the blood and the brain.

Consider an experiment conducted by Emory University professor Drew Westen in 2006. He used fMRI brain scans to monitor what happens inside a voter’s head when confronted with candidates’ statements that showed lying or pandering.

As he descirbed in an “On the Media” interview, voters in the study reckoned easily with the incriminating statements of the opposing candidates. But when they confronted the hypocrisy from their own candidate …

Westen: The first thing that is activated were a series of negative emotion circuits that were basically — for any of your listeners who can remember “Lost in Space,” it was “Will Robinson, danger, danger.” They saw danger. They saw a threat, and you could see it all over their brain. Then you saw activation in the part of the brain called the anterior cingulate. It monitors and deals with conflict … to figure a way out. And then, after they had come to their conclusion that there really was no problem for their guy, you saw activation in parts of the brain that are very rich in the neurotransmitters involved in reward. These are the circuits in the brain that get activated with junkies get their fix.

Me: You mean once they figured out how best to lie to themselves, they got a blast of oxytocin or something?

Westen: (laughs) Very, very close, that’s right. So they got this huge blast of dopamine, which is involved in reward.

Me: In other words, the same thing you get when you take coke.

Westen: That’s exactly right. There was no reasoning at all going on.

That is what you’re up against. Who would choose violation over validation?