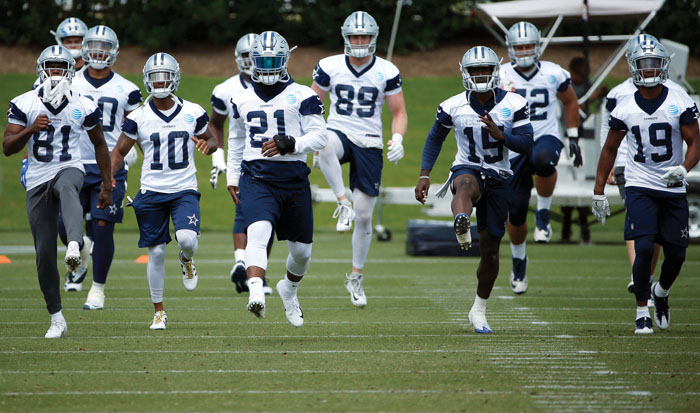 FRISCO, Texas (AP) — Less than two years removed from spectacular rookie seasons that transformed the Dallas offense, quarterback Dak Prescott and running back Ezekiel Elliott are even more in control of the future of the Cowboys.

The team must move on without Jason Witten and Dez Bryant.

Bryant was a three-time Pro Bowler playing all eight of his NFL seasons for Dallas before being released in April.

“As we lost those guys, the first statement coming in was we’re not trying to replace those guys,” Prescott said Wednesday after the Cowboys completed the second of three days of offseason practices this week.

“Those guys are irreplaceable.”

Prescott knows something about replacing a big-name Cowboy. He did so after four-time Pro Bowl quarterback Tony Romo was lost to injury before the 2016 season.

As a fourth-round selection in 2016, Prescott led Dallas to a 13-3 record, an NFL East title and was the NFL Offensive Rookie of the Year.

Elliott, Dallas’ first-round pick that year, led the NFL in rushing yards in 2016 with 1,631. Last season, he was suspended for six games because of domestic violence allegations. The Cowboys dropped to 9-7, finishing four games behind the eventual Super Bowl champion Philadelphia Eagles in the division.

Witten most often led quietly, by example. Bryant was vocal, animated both on and off the field.

“Those guys did a great job of encouraging me to be the kind of leader that I am,” Prescott said. “Kind of making me take charge. Now with those guys gone, it’s really no different.”

“He’s had really unique leadership qualities,” Garrett said. “The best leaders develop relationships with people, and he did that right from the start. It wasn’t like he was banging the drum saying, ‘I’m a leader. I’m a leader.’”

“Zeke sure brings a lot when it comes to his approach and how he plays, his physicality,” Linehan said.

Garrett said of Elliott’s season in 2017: “Obviously what went on last year was distracting to anybody. There’s no question he’s locked in and ready to focus on what he needs to do to be prepared to play his best football.”

As for who will most likely fill Bryant’s energy role, Linehan said, “We don’t have a whole ton of rah-rah guys yet. They’re working on getting to know their jobs and earning their keep. I think that will get developed.”

Tavon Austin and Allen Hurns are among the newcomers who could fill the void of two players who combined last season for 132 catches and 1,398 receiving yards. Austin was acquired in a draft-day trade while Hurns signed as a free agent in March.

Two-time All-Pro right guard Zack Martin hasn’t participated in this week’s team drills so far, though he’s working out at the team facility on his own, while his representatives try to work out a new contract.

Martin is in the fifth year of his rookie deal at a salary of $9.4 million. The Cowboys drafted him out of Notre Dame with the 16th overall pick in 2014. He has started all 67 games in the regular season and playoffs for the Cowboys.

“He’s one of the best players we have,” Garrett said. “He represents everything we want. We want him to be here for a long, long time. But there’s a business side to this, and we all understand that.”

“We miss having ‘70’ out there, but 100 percent understand the situation,” Prescott said. “Know why he’s doing it. Want the best for him. I hope he gets everything he deserves.”