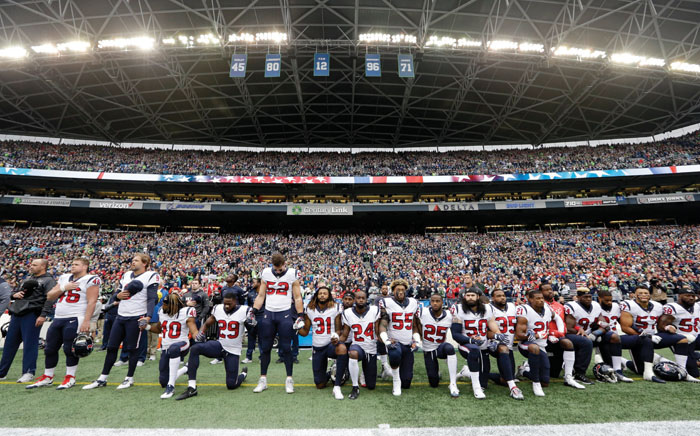 FILE - In this Oct. 29, 2017, file photo, Houston Texans players kneel and stand during the singing of the national anthem before an NFL football game against the Seattle Seahawks, in Seattle. NFL owners have approved a new policy aimed at addressing the firestorm over national anthem protests, permitting players to stay in the locker room during the "The Star-Spangled Banner" but requiring them to stand if they come to the field. The decision was announced Wednesday, May 23, 2018, by NFL Commissioner Roger Goodell during the league's spring meeting in Atlanta. (AP Photo/Elaine Thompson, File)

WASHINGTON (AP) — With its decision to ban kneeling during the national anthem, critics are accusing the NFL of prioritizing being in the good financial graces of mainstream America over the social justice passions of its players trying to draw attention to the deaths of African-Americans at the hands of police.

Some opponents of the new policy now vow to never watch an NFL game again.

The NFL’s new anthem policy — similar to NBA rules in place for decades — makes the athletes stand for “The Star-Spangled Banner” or be absent from the field while it’s played.

Critics say the league acted without input from its majority-black players and buckled to pressure from some major advertisers and even President Donald Trump, who rallied his mostly-white base against players for failing to display their patriotism, shifting the debate from social justice for minorities to how to act during the anthem itself. Others, including some players, applauded the league’s action or took no issue with the policy.

“I think they made this decision to placate Donald Trump and those like him who blindly equate standing for the national anthem with patriotism,” said Democratic U.S. Rep. Cedric Richmond of Louisiana, chairman of the Congressional Black Caucus. “The country I want is a country where everyone wants to stand for the national anthem,” Richmond said, emphasizing the word “wants.”

Vice President Mike Pence tweeted “#Winning” and declared the decision “a win for the fans, a win for (President Trump), and a win for America.”

The NFL started requiring players in the league to be on the field for the anthem in 2009 — the year it signed a marketing deal with the military. Its new rule passed Wednesday permits players to stay in the locker room during the “The Star-Spangled Banner” but requires them to stand if they come to the field.

Taking a knee during the anthem has been an issue since August 2016, when now-unemployed quarterback Colin Kaepernick started protesting the deaths of African-Americans at the hands of police. The issue bubbled over from the field into living rooms as other players joined the movement, and morphed into a larger discussion last fall when Trump called on NFL owners to fire players who did not stand during the national anthem.

“This is white supremacy, period. A blatant and disgusting attempt to strip black athletes of their voice and reduce them to a number on a jersey — all while continuing to profit off of their bodies,” said Rashad Robinson, executive director of advocacy group Color of Change.

Bree Newsome, who climbed a pole to snatch down the Confederate flag at the South Carolina statehouse in 2015, tweeted: “For the white-owned NFL to blackball Kaepernick & then change policy to specifically target Black athletes’ protest of racism is not simply a matter of football. It is about using one of the largest stages in America to reinforce racial caste in USA.”

“Instead of working together to address an issue disproportionately plaguing the communities of the majority of NFL players, the owners instead desire that players bury their heads, shut up, and just play football,” NAACP chairman Derrick Johnson said.

Kaepernick and other NFL players who kneeled said their protests were over the shootings and other mistreatment of African Americans at the hands of law enforcement. The quarterback was not resigned by the San Francisco 49ers after beginning his protest and has not played for an NFL team since. He has filed a grievance against the league, as has out of work safety and fellow protester Eric Reid.

“As a former NFL player I am extremely conflicted but more than likely will not be supporting anymore until this is resolved amongst other issues,” said Matthew A. Cherry, who played for the Jacksonville Jaguars, Cincinnati Bengals, Carolina Panthers and the Baltimore Ravens.

The NFL Players Association said it would challenge any changes that violate the collective bargaining agreement.

“This is fear of a diminished bottom line. It’s also fear of a president turning his base against a corporation,” Philadelphia Eagles defensive end Chris Long said on Twitter . “This is not patriotism. Don’t get it confused. These owners don’t love America more than the players demonstrating and taking real action to improve it. It also lets you, the fan, know where our league stands.”

Others said they approved of the compromise.

“I’m going to stand for the national anthem,” Denver defensive end Derek Wolfe said. “Whatever anybody else wants to do, that’s their decision and they have the right to their opinion. So, they can do whatever they want — as long as they stay in the locker room, I guess.”

Pittsburgh Steelers guard Ramon Foster shrugged his shoulders when asked about the policy and said that in a way, players are powerless.

“If the team says, ‘This is what we’re doing,’ and ownership (does too), you either deal with it or you’re probably going to get cut,” Foster said.