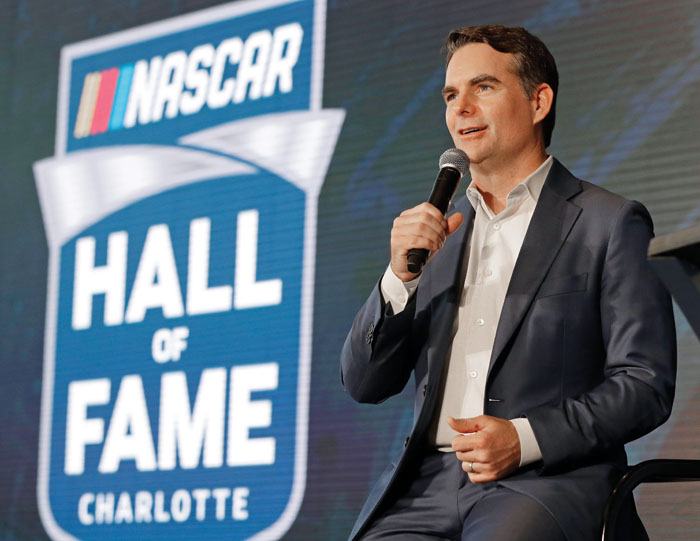 CHARLOTTE (AP) — Jeff Gordon didn’t give much thought to NASCAR while racing sprint cars in Indiana as a teenager.

He was too busy trying to get into open wheel racing.

But when Gordon’s career stalled, he headed South to try his hand at stock car racing and went on to win 93 Cup races — third on the career list — and four championships while helping NASCAR move from a predominantly regional sport to the mainstream in the 1990s. Gordon was honored for his career achievements Wednesday when he was selected to the NASCAR Hall of Fame.

Gordon said it all feels “surreal,” considering he never thought this was the direction his life would take.

“I came down to North Carolina hoping and dreaming of something, but I didn’t know much about NASCAR racing,” Gordon said. “Everything was IndyCar, open wheel, sprint car and midget racing to me. I knew about the Daytona 500 and I knew who Richard Petty and Dale Earnhardt were — but that was it.”

Gordon, a first-ballot Hall of Famer, received 96 percent of the votes from the committee, meaning only two of the 57 voters didn’t vote for him. Only Petty (200) and Bobby Pearson (105) have won more Cup races than Gordon.

Car owners Jack Roush and Roger Penske also were selected to the Hall of Fame, along with drivers Davey Allison and Alan Kulwicki.

Roush has won a record 325 races across NASCAR’s three national series, including five national series owner championships, while his drivers have won three championships. He helped Matt Kenseth (2003) and Kurt Busch (2004) emerge into premier series champions and jumpstarted the careers of Carl Edwards and Greg Biffle.

But the 76-year-old Roush his fondest memory in racing was when Mark Martin won the first Cup race for him as an owner in Rockingham, North Carolina, in 1989.

“What that meant to me is I could find a sponsor to keep going and for Mark it meant that the team was going to be solid and keep putting cars on the track,” Roush said. “There was some doubt in our minds if we were going to be able to turn the corner.”

Said Martin: “He mentored and gave the tools to people who otherwise wouldn’t have gotten the opportunity had it not been for him.”

Penske won the premier series championship in 2012 with driver Brad Keselowski, and owns two Daytona 500 wins with Ryan Newman in 2008 and Joey Logano in 2015.

Kulwicki, known for his wrong-way “Polish victory lap,” and Allison, who won 19 Cup races, including the 1992 Daytona 500, were rising stars in NASCAR before their sudden deaths in 1993. Kulwicki died at age 38 in a plane crash that April while the charismatic Allison lost his life three months later in a helicopter crash at 32.

“He was the one who was going to take NASCAR to the next level,” Gordon said.

Allison joins his father Bobby Allison in the Hall of Fame.

Bobby Allison couldn’t hold back his emotions after hearing his son’s name called, saying he had to gather himself after being overcome with emotion.

He called Bobby “the ultimate son.”

“How many fathers here have had their son come to them and say, ‘Dad, how can I get better at what I want to do?’” Allison said.

Kulwicki was a short-track racer from Wisconsin who made the move to Charlotte in 1984 with nothing but a pickup truck and a self-built race car with hopes of competing in NASCAR’s premier series. With no sponsor and a limited budget, he went on to win the 1986 NASCAR Rookie of the Year with his self-owned AK Racing team. He won five career races, including the Cup championship in 1992. He never got a chance to defend that title.

Kulwicki perhaps became best known for his victory celebrations where he turned around his car after crossing the finish line and driving in the opposite direction around the track.